Thank you for reading!

Get access to ALL of our site and our brand new electronic edition!

Starting at
$3.00 for 1 day
Get Started
View all rates

Not already a subscriber?

If you need to purchase a subscription.
You have permission to edit this page.
Edit

Brooklyn Jones (l) helps her grandmother, Wanda, run a table with commemorative T-shirts during Saturday’s Summit Lake State Park Youth Fishing Derby. In front of Wanda is a photo of her late husband, Steve, who died earlier this year. Wanda said her husband would have been thrilled with the turnout for the event Saturday. Teaching youth to fish was a passion during his life.

Sylvia Terrell casts her line during Saturday’s Youth Fishing Derby at Summit Lake State Park. She was one of 40 youth who participated in the event.

Holly Polston displays one of the fish she caught during Saturday’s Youth Fishing Derby at Summit Lake State Park.

“Lines” of communication were clear for this brother and sister at Summit Lake Saturday. Tinley Gibson and big brother Marshall caught their fair share of fun at the fishing derby.

There was no doubt. “Poppy was here.”

The spirit of Steve Jones could be seen, heard and felt all around Summit Lake State Park Saturday. The man who loved to fish – and teach young people how to literally cast their cares away – had a major impact on this year’s annual Youth Fishing Derby

You could see it in the smiles of kids holding that first big catch. You could hear it in the excited chatter among children of dads who were taught to fish by Jones himself when they were young. You could feel it in the air on a day that started out with rain, but ended with more than 40 youth participating, bringing tears to the eyes of Steve’s widow, Wanda Jones.

“It just melts my heart,” Wanda Jones said, speaking of the activity that meant so much to her husband, who died on March 9 at the age of 70. “There’s boys here today with their kids that he took to fishing tournaments when they were little. Our son’s best friend is here today with his little boy.”

Known as “Poppy,” to his kids, grandkids and their friends, Steve’s memory went with every young fisherman on this day. On the back of their blue fishing derby T-shirts were the words “Poppy was here.”

“A couple, three weeks after the funeral I found a note,” Wanda said. “I was going through some old mail, found a note and this is what it said – ‘Poppy was here.’ And it’s his writing and his little signature drawing.

“We spent so much time on this lake,” Wanda continued. “We started camping as soon as the campground opened. We’ve camped out here for 35 years.”

“His grandpa started taking him fishing when he was old enough to walk, camping along the banks down at Brookville,” Wanda concluded. “He would be thrilled with the turnout today.”

From two-year-old Boone Denton, Jones’ grandson from Minnesota, to anglers as old as 16, the turnout was impressive, if not improbable, due to the weather conditions earlier in the day.

“Especially for a rainy day, that’s an awesome turnout,” Summit Lake’s Bre DeYoung said. “This whole COVID thing is putting a damper on people’s daily lives, so they like to come out here and enjoy the great outdoors.”

DeYoung said she, too, noticed a special kind of spirit in the air.

“Oh my goodness, they are like the sweetest,” she said of the youth. “For some of them, this is their very first time fishing at all. They’ll bring a little four and a half inch fish and yell, ‘I caught one, Dad. I caught one, Mom.’”

The little fish being caught were accompanied by some big fish stories, many of them involving Steve Jones.

As she held out her hands displaying worms, young Adrianne Hamm was asked, “What do they feel like?”

The worms brought back memories for Ashley Denton, Steve and Wanda’s daughter.

“He was always a tough guy but one time my brother and I got in trouble because we were breaking the worms in half and throwing them back in the box with the other worms,” Ashley remembered. “He told us not to do that and we were like, ‘why not?’ He goes, ‘how would you feel if you were there with your friends and somebody ripped one of your friends in half and threw it back on top of you?’ He was thinking about the feelings of the other worms in there. I thought that was pretty funny and I always think of that when baiting a hook.”

Meanwhile, it was a big day for the Gibson family. Marshall Gibson caught eight fish on the day, while little sister Tinley reeled in four. Marshall caught the smallest fish, measuring three and a half inches. Liam Gibson, meanwhile, caught six fish.

But the biggest catch belonged by Miles Wyatt, whose fish measured eight and a quarter inches.

The Summit Lake staff was assisted in the event not only by Wanda Jones and family but also by the Blue River Valley Optimist Club, which contributed $50, and the volunteer work of member Jim Smith. Live Bait was supplied by Summit Lake Bait Shop. Local business Gittin’ Jiggy With It Bait and Tackle also helped with door prizes along with JBC Outfitters of Muncie.

Jones said she is establishing a fund in her late husband’s honor through the Henry County Community Foundation to promote youth fishing.

“I want all the proceeds to go for helping kids and I thought why not right here where we grew up?” Wanda said.”He and his fellow Chrysler retirees had frequent tournaments out here. He fished out here every week – in the summertime, two or three times a week. It was his passion. It was his therapy, especially after he had his heart attack. It was a good stress reliever for him.”

There is also a bench at Summit Lake State Park dedicated to Steve. It’s positioned in a place where a visitor can see some of the most gorgeous sunsets in Henry County.

The bench is engraved with Steve’s favorite fishing line: “OK boys, this is my last cast – unless I get a big one.”

Yes, indeed, “Poppy was here.” He will always be here in the hearts of family and generations of fisherman. Boys and girls who got hooked on the great outdoors, thanks to Steve Jones. 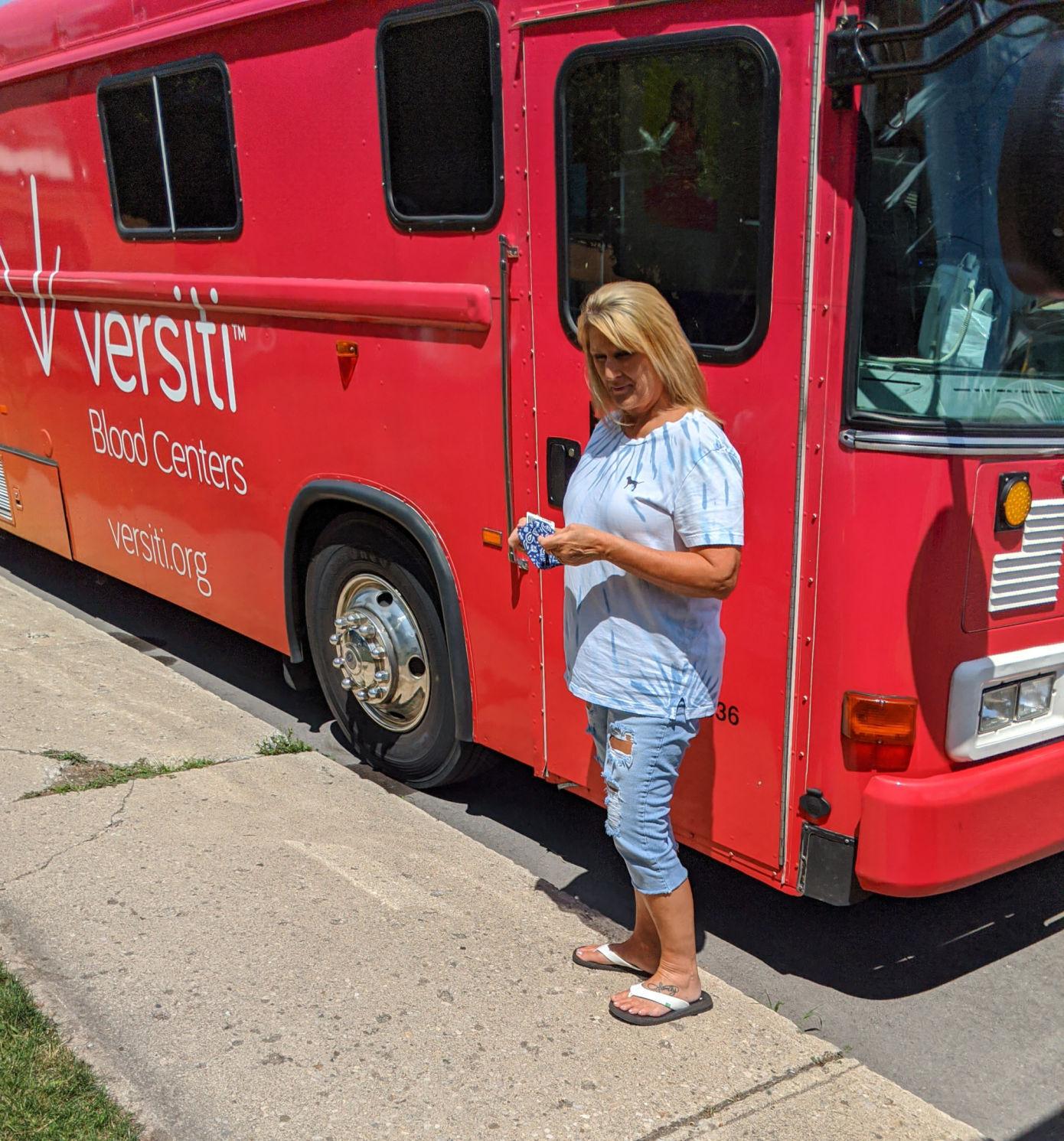 Kathy Hunt, club manager for New Castle Elks 484, was the first in line to donate blood at the lodge’s recent blood drive. Overall, 20 units of whole blood were collected which, in turn, will go to 60 people in need. The Elks motto is “Elks Care, Elks Share.”

The newest Habitat for Humanity home-owners moved into their new home on S 19th Street in New Castle. The home was dedicated in July.

The home was built with financial help and over 200 volunteer hours provided by Boar’s Head Provisions. Over the years, Raintree Habitat for Humanity has built four homes in the Castle Heights Neighborhood and is close to completing the fifth, totaling $350,000 in new community assets, and placing those properties back on the tax roles.

The last two homes to be built were constructed on lots donated by Healthy Communities of Henry County and Interlocal Community Action Program (ICAP) through the New Castle Blight Elimination Program.

In the effort to improve the neighborhood, this realizes one of the goals of the Castle Heights Neighborhood, since the new homes have been built on two adjacent lots to help reduce density and to add to the appeal of the new homes. This kind of Neighborhood Revitalization is intended to promote increased value, beautification and overall improvement in previously blighted areas of the city.

The partnership has produced three pocket parks, all designed and installed by Healthy Communities, more than 30 trees being planted on 16 vacant lots, the locations of houses that were demolished as part of the Blight Elimination Program (BEP). The trees and 250 day lilies came from grants by Vectren Energy and Duke Energy.

Several BEP properties have also been sold to adjacent neighbors, increasing the value of their homes.

According to Alan McCraine, Chair of the Henry County Housing Committee, “We encourage local residents to get involved with us. So much could still be accomplished in areas of youth activities, recreation, small business development, and job training.”

Call Alan McCraine at 765-520-9845 or alanmccraine@yahoo.com to indicate your interest.

The New Castle Board of Public Works and Safety took another step toward getting the city’s street department into a new permanent home Monday.

The board authorized Mayor Greg York to sign an agreement for purchase of the former Carter Lumber property on Ind. 38, west of town.

City Attorney Joel Harvey said in order to keep the process moving, he would recommend “giving the mayor authority to execute a contract, subject to appraisals coming back, the average being $450,000 or greater.”

York said one appraisal on the site was back already.

“I hope to have another appraisal later today or tomorrow,” York added.

Of the two appraisals, York said one was done locally while the other is from a Fishers firm.

York has said with the space available, existing offices, bathrooms and storage and concrete areas for heavy trucks, the site could be ideal.

The mayor said purchase price of the property was $659,000, but that for city purposes and to help out in aftermath of the fire, he’s been told some of that would be reduced. The city would purchase the building with its insurance money received from the fire, which has been ruled accidental in nature.

The Panthers volleyball team is excited about what could be their best season in many years.

The team’s major goal this season is to be able to add “2020” to the sectional banner that hangs in the gym, currently displaying “1984” as the last time the KHS volleyball team was successful in winning a sectional title.

The Panthers are adding some freshmen to their back court with Allie Smith and Jalyn Kopp and also a freshman outside/middle hitter, Destiny McGlothlin.

“With all of the returning players and so many of them working hard in the off-season – well as much as the off-season had to offer with the interruption of COVID-19 – the Panthers are looking to have one of their most exciting, successful, and fun seasons yet,” said Varsity Volleyball Head Coach Shanna Smucker. “Right now, we are just praying that we get to have our season and that our season can make it all the way through sectionals, at least.”