Thank you for reading!

Get access to ALL of our site and our brand new electronic edition!

Starting at
$3.00 for 1 day
Get Started
View all rates

Not already a subscriber?

If you need to purchase a subscription.
You have permission to edit this page.
Edit

In June, reports indicated more than 700 federal, state and local law enforcement officers across the country were injured during nationwide protests over the death of George Floyd.

Meanwhile last Sunday in Henry County, law enforcement officers were not only celebrated but supported through monetary donations during a “Back the Blue and First Responders” benefit motorcycle ride.

The stark contrast was one that local law enforcement officers expressed great appreciation for Monday night as the organizer, Robert Shaffer, presented a check for $1,564 that will be split evenly between the New Castle Police Department and Henry County Sheriff’s Department.

“I think the sheriff would agree: We have no complaints as far as how we’ve been treated here in New Castle and Henry County,” New Castle Police Chief Matt Schofield said. “The communities, both in the county and the city, have been super as far as backing the police. This is just another way of the communities showing support for us.”

Shaffer, a former Henry County Jailer, said he was motivated to do something positive for people he considers unsung heroes of Henry County.

“It was basically to show our support for law enforcement and first responders for everything they do,” Shaffer said. “At this point it’s kind of an ungrateful business to be in. I support them 100 percent. I used to work for the sheriff. I appreciate everything he’s done This was just my little way to try and give back.”

The event drew 47 motorcycles and seven other vehicles on the ride that began in New Castle, continued with stops in Greenfield, Lawrence, Fishers, Noblesville, Pendleton, Anderson and Muncie before arriving back at Weenie World in New Castle. There Shaffer showed his commitment to law enforcement even more by getting in dunk tank to raise additional money.

Sheriff Ric McCorkle and Major Jay Davis – who both rode their own motorcycles in the event – praised Shaffer’s efforts.

“We appreciate everything we can get in as far as supporting our K-9 units, our dive team, our SWAT team, the sheriff’s camp – we appreciate it all,” McCorkle said. “Of course, I ride and Jay rides and when Bob mentioned this, I really appreciated. All the different departments in the county will benefit from it and hopefully it will be something we can see annually.”

“Being able to participate in the ride personally yesterday, it was enjoyable to see the support we do have in law enforcement,” Davis said. “A lot of people were there recognizing the police officers and the job that we do. We’ve all taken it on the chin quite a bit lately. It’s nice to see a thank you once in a while. As one of the law enforcement officers there, it was a treat to see that extra thank you.”

“The motorcycle rides are great. Unfortunately, we’ve had three fatalities in the city of New Castle within the last year and they’ve all involved motorcycles. I can’t stress enough to the community you have to be totally aware. You should always look a second, third and fourth time to make sure. They’re a lot smaller than a car.”

“I can’t stress enough to the community to be on the lookout for them. It’s not such a problem in the winter time, but when it’s nice out, it’s hot out, motorcycles are everywhere.” 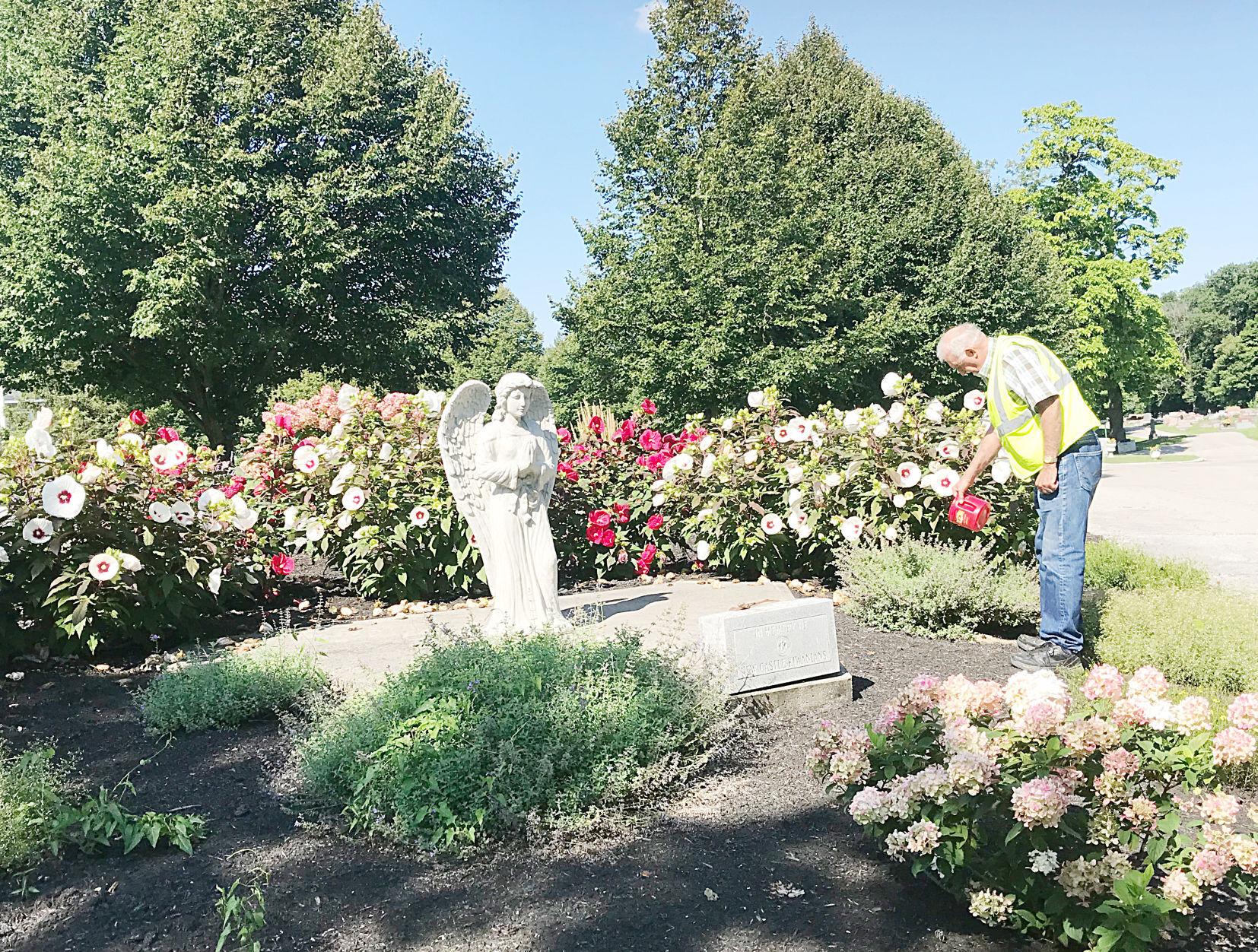 Floral beauty at the cemetery

A phrase Americans are all too familiar with greets them often whenever they buy something from a store.

Wednesday morning, U.S. Rep. Greg Pence told a group of local residents at the New Castle-Henry County Public Library that more than just products are coming from there these days. He said bigger and bigger concerns are also being produced by the world’s most populous – and apparently power hungry – country.

While answering local-resident questions, Pence indicated that China, not Russia, should be on every American’s radar. Unfair-trade practices, theft of intellectual property and other issues are among red flags that Pence believes demand more attention. He also said the United States should stop “enabling” China.

According to Business Insider.com, the Belt and Road Initiative is one of China’s most ambitious projects. It involves partnering with dozens of countries around the world through trade and infrastructure projects, such as shipping lanes, railroads, and airports.

Pence said it should be a major concern for U.S. leaders.

Nate LaMar, whose work with Draper has taken him all over the world, applauded Pence’s comments and echoed his concerns.

“China is especially taking advantage of everyone being distracted by the pandemic right now,” LaMar said. “Some third-world countries are now in such overwhelming debt to China, that they may never get out.”

In response to a local resident’s question about incentivizing manufacturing in the United States Pence said there is a China task force “looking into the very issues you just asked about.” Pence said the report on “Holding China Accountable” will be out in either late September or early October. He believes the report will help find ways to re-incentivize a more rapid reintegration by industry back into the United States.

“They’re playing a game we think is morally and ethically unfair, but we enable them,” Pence said. “We’ve enabled them for too long. The NAFTA agreement – the cheating of China was coming through Canada and Mexico. USMCA should reduce that tremendously.”

Known at the United States-Mexico-Canada Agreement, the USMCA is a free trade pact between Canada, Mexico, and the United States. It is designed as a successor to the North American Free Trade Agreement (NAFTA).

Pence applauded President Donald Trump’s actions in relation to China during his administration.

“This current administration has been doing exactly what you’d like to see done,” Pence said. “I think if President Trump hadn’t thumped China and the WHO (World Health Organization), they’d be doing even more. He stopped them. And nobody disagreed with me on that. My preference is president gets re-elected and continues to take on China.”

With only five days until the scheduled start of the school year, there were still new teachers to approve and positions to fill this week.

At a special school board meeting Wednesday, the New Castle School Board welcomed in three teachers who will be filling vacancies at Riley Elementary School and New Castle High School.

The second hire will also be at Riley Elementary. Melanie Hufford will be serving as a third grade teacher. Hufford is returning to the school system after previously leaving for family matters. In her first stint with the corporation, Hufford was a kindergarten teacher.

The third teacher officially hired at the meeting is Steven Dick. He will serve at the high school as the new physics teacher taking the vacancy left by the retiring Darrell Norrick. Dick was previously a Science teacher at Union High School.

These approvals come very last minute as the school year was originally scheduled to begin Aug. 5, the day of the special board meeting. The ongoing COIVD-19 pandemic caused the start of the school year to be pushed back to Monday, Aug. 10.

New NCHS athletic director Ben Wissel (left) with NCHS principal Kirk Amman (right) after a special meeting where Wissel was hired. He will start the job in the coming weeks after finishing at Daleville.

New Castle School Superintendent Dr. Matthew Shoemaker read from a letter during the meeting from an athlete Wissel once coached as a wrestler at Duke University.

“I was the kid that was never supposed to be there,” the letter said. “He saw something in me, cultivated that something, inspired me, and molded me into something I’m proud of now … Coach Wissel showed me how to be more than an average person.”

Wissel is a graduate of former North Central Conference rival Richmond High School. From there, he went on to Purdue University where he was a two-time NCAA All-American wrestler.

“I’ve been impressed with you since the first day we met you,” Callaway said. “To be honest with you, when I first walked in that door I was a little intimidated by you, too. But I think why you’re going to do a good job here without a doubt, you’re a winner. Not just in sports, but everything.”

After graduating from Purdue, Wissel became an assistant coach at the university before leaving to become head wrestling coach at Duke University for six years. He left that position to go back to Indiana to take the athletic director position at Daleville High School, where he served a two-year stint before coming to New Castle.

“I’ve always said I was lucky to have support through all of my sports endeavors,” Wissel said. “Whether it be as an athlete, as a coach, now as an administrator. This is a community that seems to really support interscholastic athletics. It’s a focus in the community and that’s really attractive. You have a lot of people that really care about those programs being as set up as possible for success.”

Wissel is replacing Shane Osting as New Castle’s athletic director. The opening came as a surprise to Wissel, but his leadership and story immediately impressed the New Castle School Board and Administration.

“He was just off the charts on his accomplishments, his integrity,” said New Castle Principal Kirk Amman. “He’s an inspiring type of guy and a mix of old school and new school. He brings a lot of good core values and discipline, but has that progressive and open-minded approach.”

Wissel has a few goals in mind when he starts his new position in the fall.

“The first thing I think about is the continued success of the programs,” Wissel said. “The other thing is, take that time to get to know the team that I’m going to work with to accomplish those goals.”

Wissel is excited for the opportunity to work to incorporate the community and many notable New Castle alumni back into the athletic program.

“The State of Indiana knows a tradition still lives in everything that New Castle does,” Wissel said. “That’s kind of what people think when they think of scheduling with this school … There’s been a long history of accomplishment here. A lot of those really accomplished people still live in this town, and a lot of these people really want to be in the fold here. We’ve got to have them want to be involved, and not only that, but be an influence to the current student-athletes that are trying to make their own way now.”

Solidifying the New Castle tradition is a goal for Wissel.

Wissel is confident in the school administration and in himself being able to handle the uncertainty surrounding athletics for the fall semester due to the ongoing COVID-19 pandemic.

“Life is nothing but a series of adjustments,” Wissel said. “It’s gonna be that way, you might as well embrace it. Anticipate sometimes those adjustments are really big, sometimes their a little bit less. Be happy when they’re small adjustments, but nonetheless you have to be fluid and sometimes creative through those adjustments. This is no different. There is guidance out there and a smart team of people here … I have confidence in my team here that it’ll be handled great.”