News
featured
Starting over isn't anything to be afraid of; New Castle's Class of 2021 begin their next chapter

The Fieldhouse pine was alive with cheers and (happy) tears Sunday afternoon as friends, family and classmates snapped selfies with their grad and took live streams for their socials.

The graduating seniors were back on the Fieldhouse floor this year after 2020 called for an abbreviated ceremony.

The Trojans made it through a pandemic and everything else last year served up and were a part of the sea of green that flowed to the gym floor Sunday. 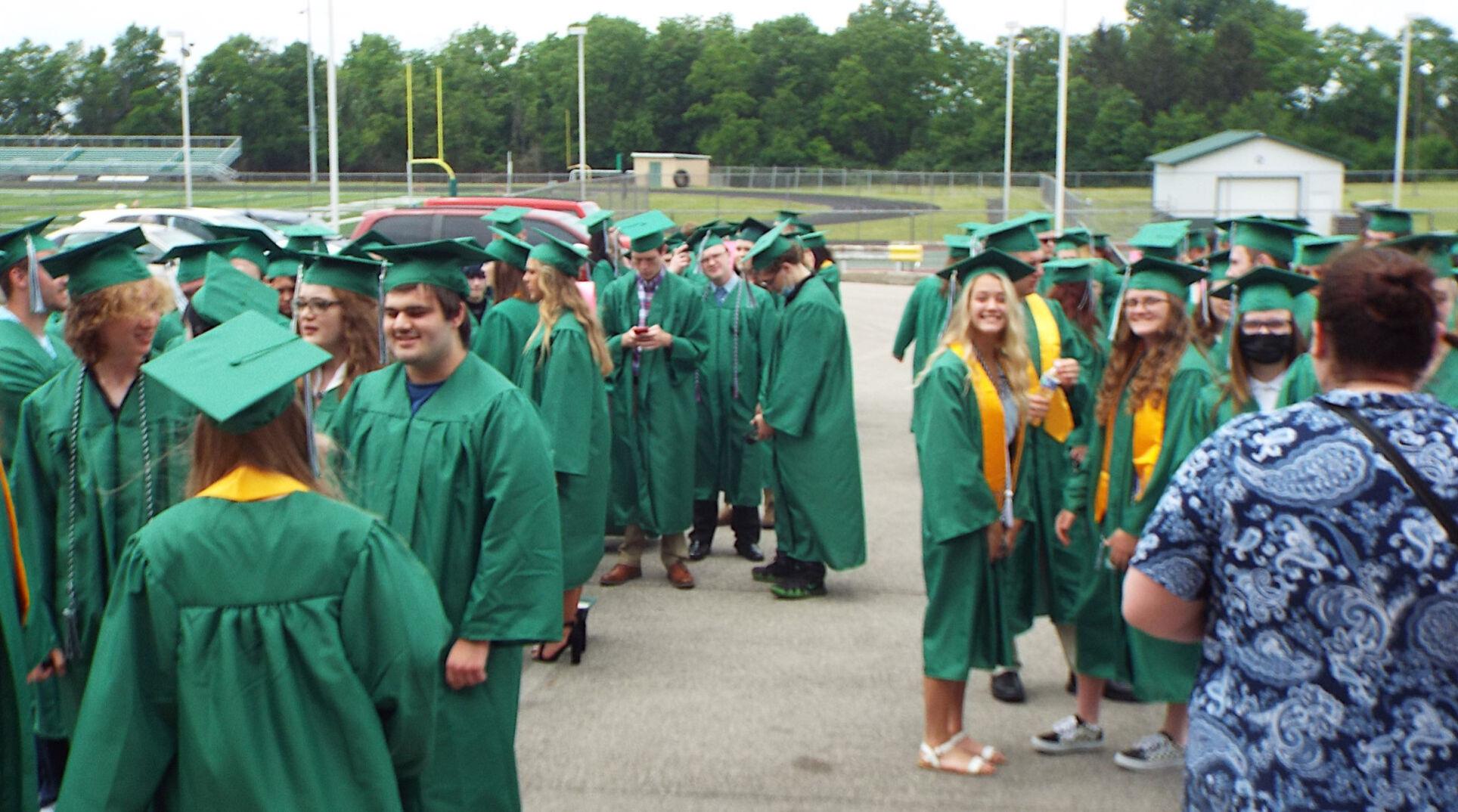 Seniors line up outside the Fieldhouse before graduation Sunday.

It was a celebration of the class’s motto: “Prevailing through adversity.”

Caleb Supinger turned to Google to help him figure out how to write his graduation speech. Google told him to write about his memories.

“As I think about graduation, I think about how it’s its own sort of starting over,” Supinger said. “Not from the ground up but definitely a new beginning. After all, that is what ‘commencement’ means: a beginning ... according to Google.”

Supinger spent much of his high school career starting over on art projects and speeches. Like the one he gave Sunday afternoon. 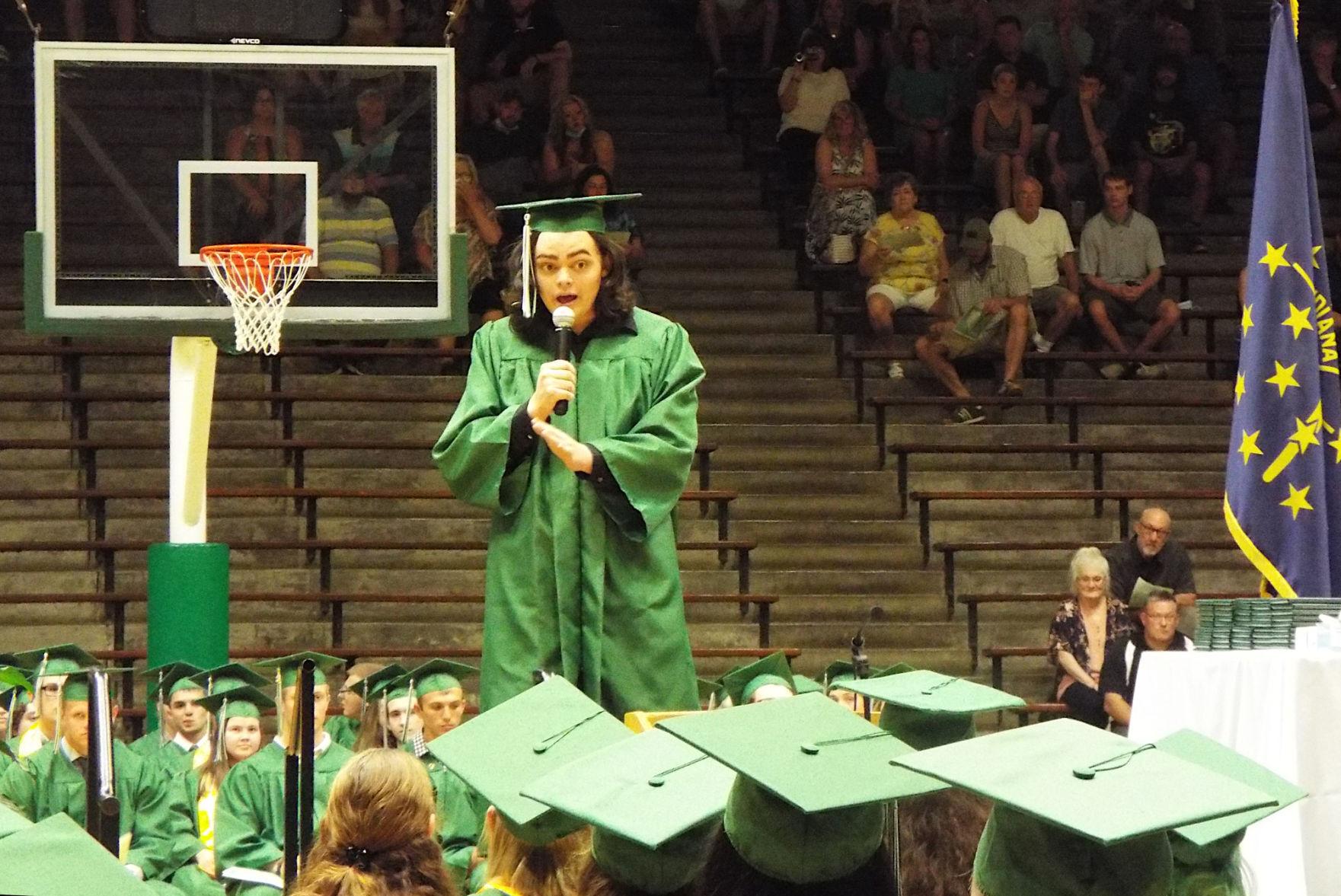 Caleb Supinger told his fellow graduates that graduating was its own type of “starting over” and not something they should worry about.

“Just because we start over doesn’t mean that we have to throw out everything from the past,” he said. “I actually had to analyze the themes that were persisting throughout the rough drafts to make this speech. And though I had to start from the beginning, I still had those rough drafts to pull ideas from.

“What I’m trying to say is, when things get harder – and they have been hard in the past – don’t give up,” Supinger told his fellow grads.

He wrapped up with a quote from Dreamworks founder Jeffrey Kratzenberg: “’We shouldn’t be fearful of starting over.’”

Seniors in the green gowns then took their places in the choir and band for the final time as the Trojans performed “Battle Hymn of the Republic.”

As the applause died down, speaker Anastasia Taylor took the stage at half-court.

Although Taylor used to spend quiet moments delivering graduation speeches in her head, she never actually thought she’d be one of the key speakers. After much reflection and one scrapped draft, she figured it out.

“I think of this speech more as a eulogy or an ode than anything,” she said. “All us students are here to mourn the death of our high school careers.

“Yes, this is the end of this part of my life. But I’m still at the beginning of it. And so is the rest of my class,” Taylor said. “If anything, I’d say we’re at Chapter 3.” 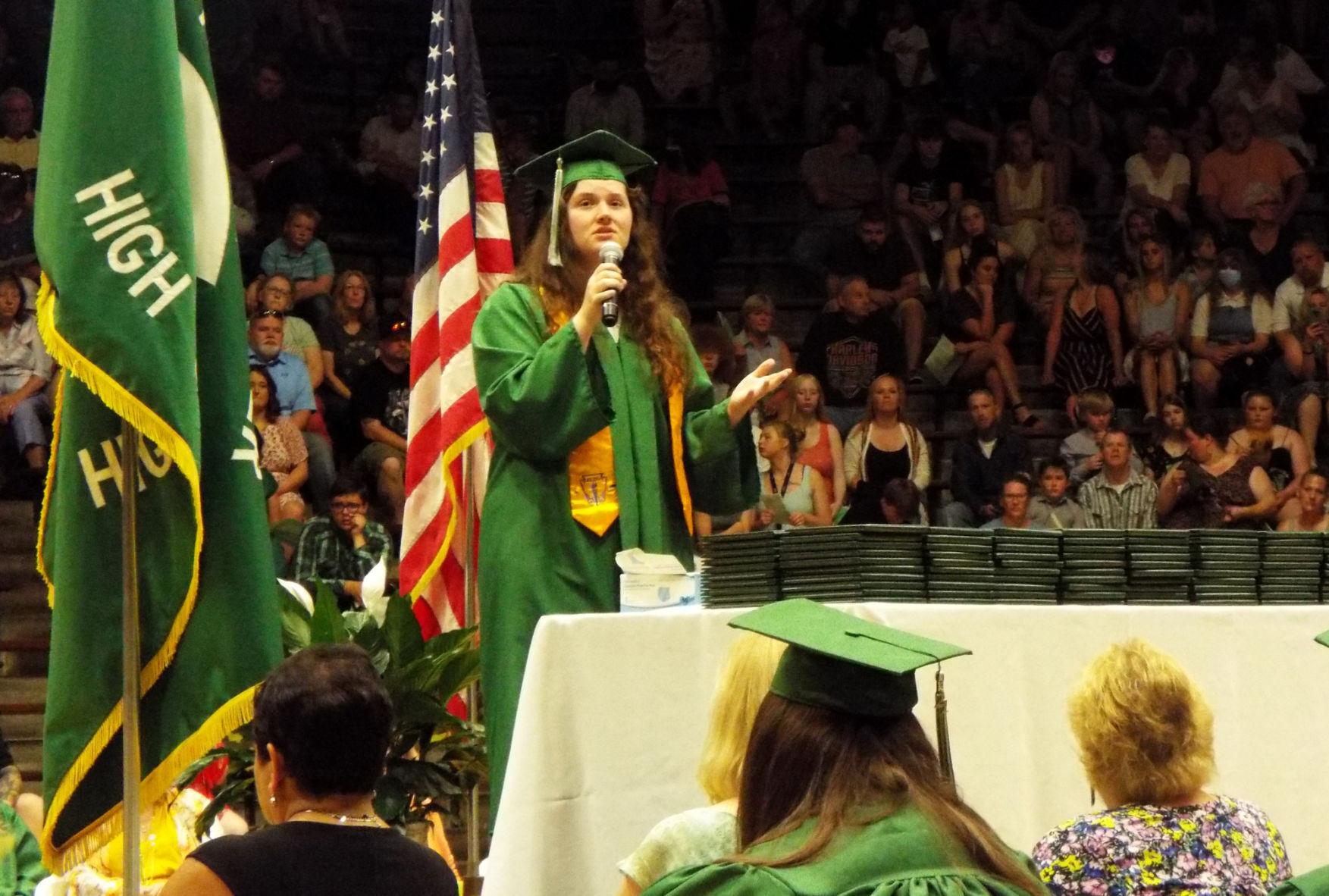 She hopes Chapter 4 will show the changes they made in the lives of other people around them.

Class President Grayson Joslin said the spirit of the his class exemplified their motto of prevailing through adversity. 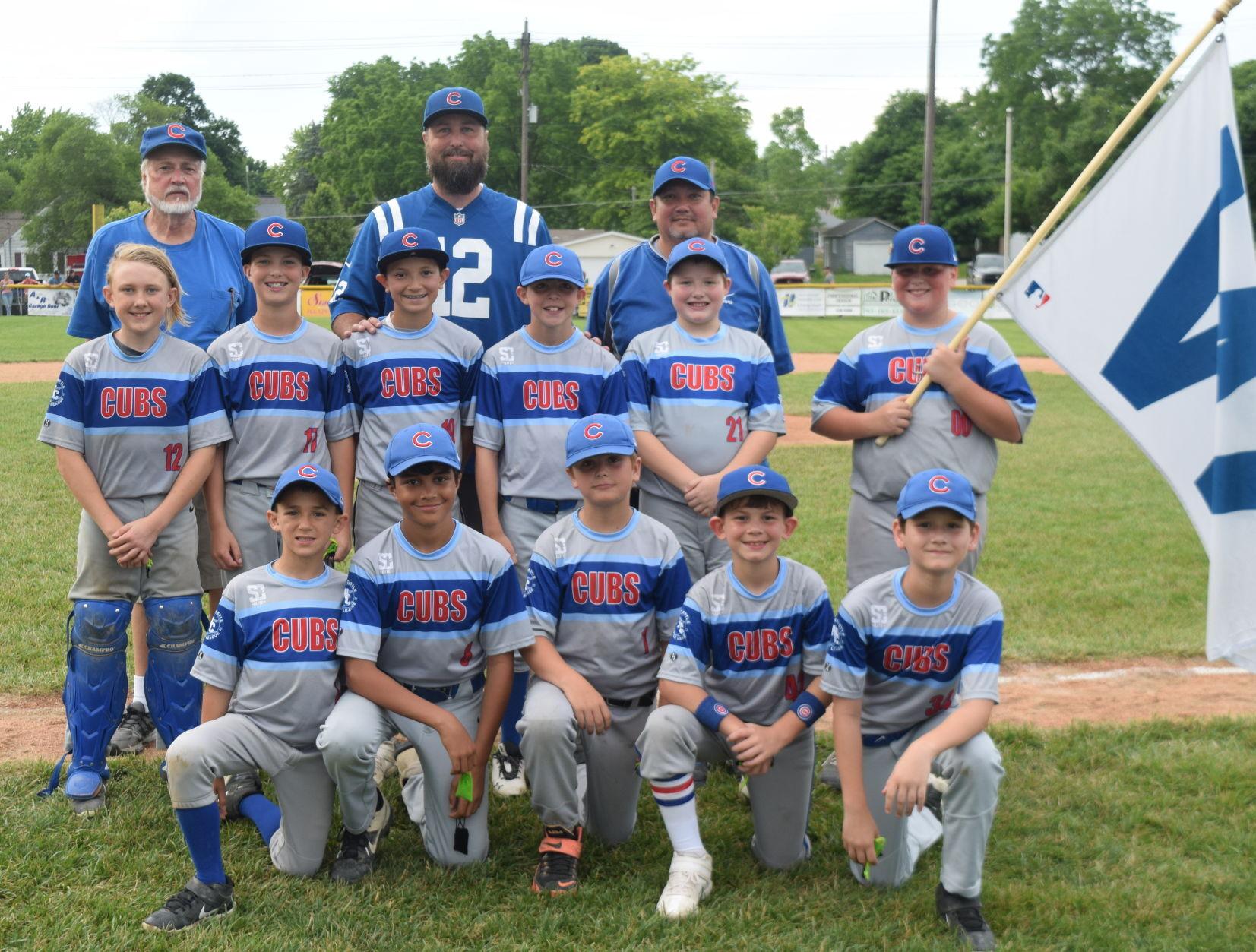 The Walden Eye Care Cubs are New Castle Little League Baseball Major League City Tournament champions after defeating the Lamberson and Malott Eye Center Yankees 6-1 in the title game Tuesday evening on the lower diamond. The Cubs also were the regular season champions. A story about, and more photos from, the game are on A6.

News
Tri super taking a job closer to home; School board readies for next school year

The South Henry School Board met Tuesday to finalize new business items that would affect the 2021-22 school year. 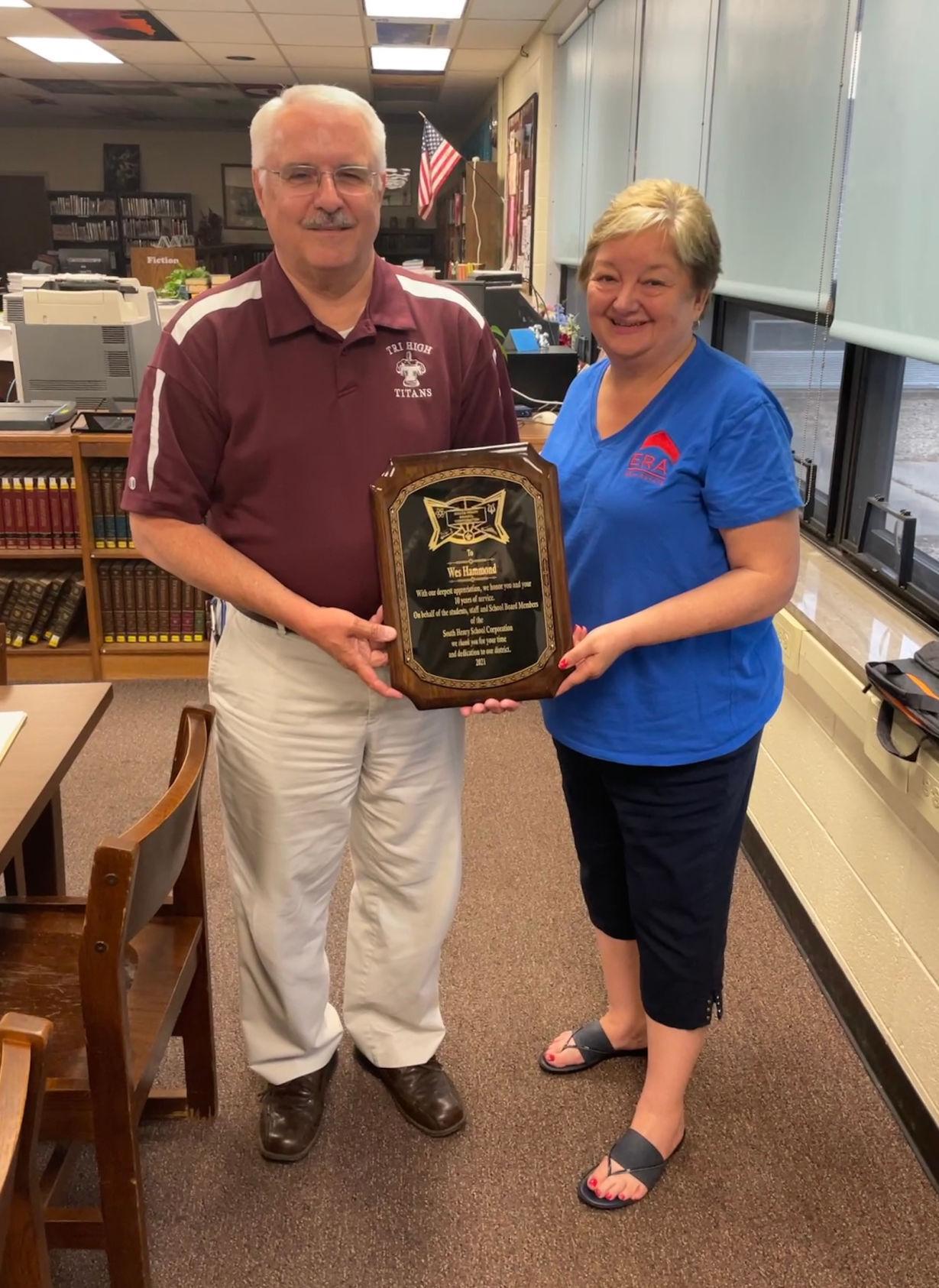 Board member Justin Cox doted on Hammond, stating, “You’re leaving the school a lot better than you found it, that’s for sure.”

“It’s been a fun ride,” Hammond said. “I always wanted to be a superintendent but never thought I would be driving across the state to be one. When I started here, I thought I’d only be here a few years – and it turned into 10 wonderful years. If it weren’t for my lengthy drive, I’d stay another 10!”

Bryan Peggs announced that himself and Duke Falck will both be stepping down from being the girls’ softball co-head coaches. During their time with the program, they led the program to its first sectional win in school history.

Stacey Guffey was approved to continue as the full-time school resource officer.

Handbook changes for Tri Jr. Sr. High School were approved to allow students taking dual-credit courses and AP classes to have their grades weighted to the same level as other area high schools. A set of criteria was also approved to allow second-semester seniors the opportunity to wave their final exams.

The FFA truck and two burgundy vans will be for sale via public bidding in July. Contact Tri High School at 765-987-7988 for more information regarding the vehicles.

The next South Henry School Board meeting will take place at 7 p.m. Tuesday, July 13, in the high school library.

In Tuesday’s story about Shenandoah High School’s graduation, McKayla Myers was the student who rose from a wheelchair to accept her diploma at Sunday’s Shenandoah commencement. She was misidentified in a story and photo that published. We apologize to McKayla and Isabelle Kinnett for the errors.

Teams of four will compete in a Florida Scramble format, and there will be prizes for longest drive, closest to pin, and shortest drive for both men and women. Many local and state level elected officials will be in attendance.

Costs for entry are $240 per teams of four, and single entries are $60 (players will be placed on teams). Lunch, snacks, and drinks will be included for all players. Spectators can purchase lunch for $15. Sponsorship opportunities are also available.

News
IU Football Coach Tom Allen is coming back to New Castle; Speaking at the Armory on June 20

The New Castle Parks and Recreation is having their Father’s Day Celebration on Sunday, June 20.

The keynote speaker will be none other than Indiana University Head Football Coach Tom Allen, who was born and raised in New Castle.

The program, called “An Evening with Coach Tom Allen,” will be held at 7 p.m. that day at the New Castle Armory. Doors will open at 6:30 p.m.

Allen was the recipient of the 2020 American Football Coaches Association Coach of The Year after leading the Indiana Hoosiers to a 6-2 record in the shortened college football season.

Allen played high school football at New Castle High School under his father, whose name was also Tom Allen. The senior Allen was the head coach of the Trojan football program.

“This program has been in the works for over a year and a half,” New Castle Park Superintendent Mike Bergum said. “Last year when I asked him, he mentioned that they were too busy on campus and with recruiting that weekend. Then Covid hit, and it shut everything down. I tried to contact him again this year and he told me the same thing. I thought it was a dead issue, but two to three weeks ago he called me and said, ‘Mike, I want to do this.’”

Tickets will be $5 per person. Bergum said there would be light snacks provided for the event. Henry County Community Health will be the sponsor for this event.

“We just want to beat the rush and see where we are on Friday,” Bergum said.

Tickets will also be available for purchase at the Mayor’s office starting on Monday, June 14, during regular business hours.

“I’m extremely excited about it, considering this has been in the works for over a year and a half,” Bergum said. “We’re extremely excited to have him back, and we’re kind of throwing it all together at the last minute, but it’s all coming together. Even though it has been on the list for a while. It’s going to be big.”