There was confusion about where the November meeting was taking place due to a problem with the county’s email system. The planning office said they sent meeting notices and the agenda on Nov. 10, but the emails did not get out to local newspaper nor all of the board members.

The planners held off opening the meeting for a few minutes beyond the advertised time to give people time to come out to Memorial Park if they’d gone to the courthouse (the normal meeting place) by mistake.

Attorney Sean Row opened the meeting because the Planning Commission has not had a president or vice president since Jim Wenning and Rachel Clark resigned in October.

Two members of the Henry County Planning Commission resigned Thursday over politicization and “troubling interactions” of the board.

The board selected Kenon Gray to be president and Olene Veach to be vice president. Both Gray and Veach abstained from votes on their respective nominations.

Gray assumed his role over the meeting and moved to the lone agenda item, a request to build a solar farm just north of Middletown.

Indiana Municipal Power Agency (IMPA) originally requested a commission-approved use (CAU) in October to build a 1.4 megawatt farm on 10 acres off Raider Road and CR 800 W.

The Planning Commissioners tabled discussion until IMPA could provide some more information to them and the neighbors around the proposed solar field.

There could soon have a new home for an old Sulphur Springs business along U.S. 36.

IMPA provided the planners the requested information before the November meeting.

Chris Sanders, vice president of generation at IMPA, attended Thursday’s meeting to answer any further questions they might have.

Board member Marsh Gratner suggested several local people IMPA could work with as they begin researching native plants that can be added to the solar field.

“I understand that is always a concern for folks when something new comes in. But we’ve not seen data that shows that it has had an adverse affect on sales,” Sanders said.

Sanders also explained that the planned solar panels would follow the path of the sun as it moves from east to west across the sky.

Gray questioned the way the panels were laid out in the provided map of the area. His concern is that they were close to the neighboring property to the south.

“I would think the farther away, the better,” Gray said.

Sanders said this is a preliminary layout and it is possible to make small tweaks.

“We’re certainly open to discussion on things like that,” Sanders said.

When the sun is shining, the IMPA solar field will supplement the electricity that Middletown needs. On cloudy days or at night, all of the Middletown’s electricity will come from the transmission system, as it does now.

The Henry County Planning Commission voted 7-0 on all parts of the CAU application. The CAU is approved and IMPA can move forward with their solar farm project.

Veach made sure the Planning Commission came back to another tabled item: supplemental pay for Permit Clerk Jody French.

French has kept the planning office running by herself since former Zoning Administrator Darrin Jacobs resigned to take a job in the private sector.

Veach first brought the suggestion up in October that they pay French for that extra work. The issue was tabled so the Planning Commission had time to review the legal process.

Having figured out the transfer process, everything was a-go Thursday.

Veach made the formal motion to pay French the difference in pay she would have received from June 5 to Nov. 19 if she’d been on the Zoning Administrator salary. The total came to just over $5,100. Dale Cole seconded.

The vote was unanimous 7-0 to pay French the extra money.

“You kept us afloat for six months,” Gray said.

Green served as a representative of County Surveyor Steve Rust.

The Henry County Purdue Extension Board is responsible for replacing Jim Wenning.

Next month’s meeting will be at a different time and location due to the holidays and other government meetings getting rescheduled. 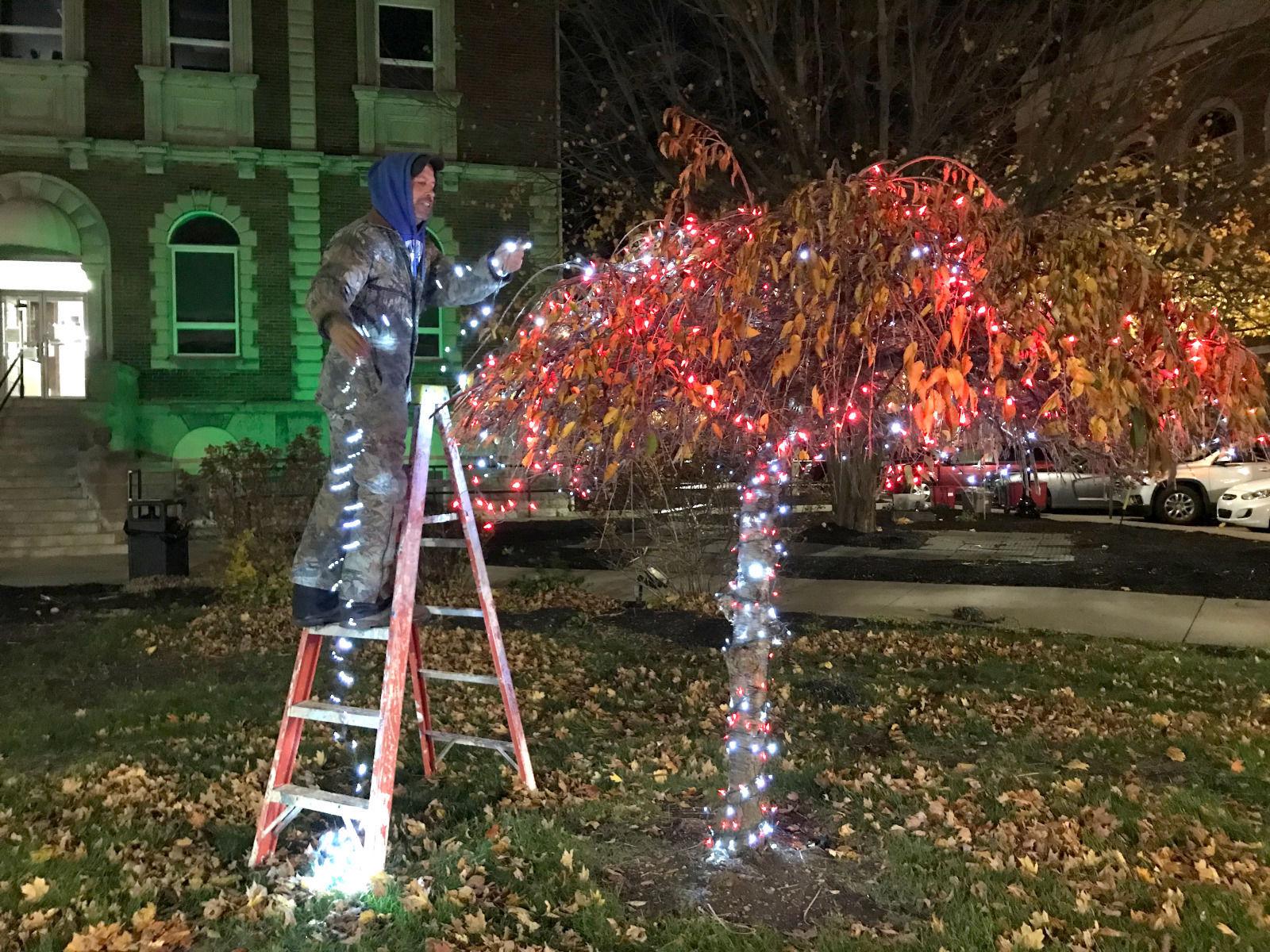 Last week’s article was all about Carthage in November. Another event was just recently added that residents will want to add to their calendar, The Kids of Carthage Harvest Dinner.

This event is tonight from 5-8 p.m.! It will be held at the Marick Event Center, 300 E 3rd Street in Carthage. Spaghetti/pasta, salad, garlic bread, and a dessert will be provided for a free will donation (all proceeds will go to the Kids of Carthage). If you would like to volunteer to serve or provide food, please call Shirley Richmond at 765-561-7996.

Just a reminder that Carthage has two other upcoming events where dinner is served!

On Nov. 21, the Carthage Community Church will be hosting its monthly community dinner at 6 p.m. Ham, scalloped potatoes, sweet potatoes, green beans, corn casserole, rolls, and of course dessert are on the menu!

Then on Nov. 25, Linda Muegge’s Feast of Plenty (11 a.m. – 4 p.m.) is providing Free hot Thanksgiving meals and groceries! Dinner includes turkey, dressing, mashed and sweet potatoes, green beans, corn, rolls, dessert, and a beverage. Meal pickup is at the Carthage Community Center at 1 North Main Street. Delivery can be arranged by calling 317-395-4095. COVID precautions will be taken with deliveries. This event is sponsored by area churches, businesses, and volunteers. Anyone interested in volunteering is asked to call the above number or visit www.feastofplentyourtreach.com

With Thanksgiving being right around the corner, I would like to take a moment to thank all the participants, community members, and volunteers who give their time and talents to better our town!

Harvey is the New Castle city attorney and provided the County Commissioners with legal counsel until December 2020.

The commissioners began looking for looking for a new attorney earlier this month, after their lawyer Martin Shield was arrested on drug dealing charges.

The Courier-Times spoke with Commissioner Bobbi Plummer on the recent re-hire of Harvey.

Plummer said, “Monday and Tuesday of this last week interviews were held for the commissioners to hire a county attorney. There were three individuals interviewed: Jeremy Bell, Mara Hoff and Joel Harvey. Harvey was chosen at the commissioner meeting Wednesday night.”

Plummer said Commissioner Steve Dellinger made the motion to hire Harvey for the position and Commissioner Ed Tarantino seconded.

“As I was unable to attend all of the applicant interviews, I abstained from the vote,” Plummer said.

Henry County to receive $9 mll from federal Rescue Plan; Local cities, towns to get another $5 million

“This ordinance is the framework for structuring how to spend ARP funds for Henry County,” Council President Susan Huhn said.

The ordinance also touches on an allocated sum of $1 million for the sewer of the new Henry County Jail.

Councilwoman Betsy Mills said. “The fact that the state is willing to pay for 90 percent of this project is a gift.”

There’s also a big question mark in the air about the total ARP funds. It was stated in that plan that another $1 million would be used to cover costs of administrative services for the ARP funds package.

“Hopefully that comes in far less for administrative fees,” Councilman Gray said. “It was probably a high estimate.”

Councilman Clay Morgan made the motion to approve the ARP resolution and the motion was passed 6-0. Council member Chad Malicoat was not at the meeting.

The Courier-Times regrets the error.

The Henry County Commissioners meet in special session at 3 p.m. Monday, Nov. 22 in the courthouse. The purpose of the meeting is to consider and possibly approve contracts for repairs to the YOC Building and any other business that needs brought before the commissioners.

Ivy Tech Community College locations across the state, including the Henry County campus, will host Express Enrollment events from Dec. 6-10. The events will be from 9 a.m. to 6 p.m. daily.

Walk-ins are welcome and no appointment is needed. During the event, prospective students will have the opportunity to complete their enrollment steps and sign up for classes starting January 19, 2022.

Click and hold your mouse button on the page to select the area you wish to save or print. You can click and drag the clipping box to move it or click and drag in the bottom right corner to resize it. When you're happy with your selection, click the checkmark icon next to the clipping area to continue.