The city council took the first step Monday to raise more than $1 million in bonds to work on New Castle’s parks.

The New Castle Parks and Recreation Board has determined to issue bonds in an amount to not exceed $1.4 million in order to construct and complete park projects. The council accepted Ordinance 3865 on first reading at Monday’s meeting.

“We’ve been in this process for over a year, for projects, including Infrastructure and new equipment,” said Park Superintendent Mike Bergum. “It’s very beneficial and very needed in our community. There are several projects that feed off each other, one doesn’t have to be completed before the other. We’re just excited to get started.”

Any bond that is issued by the Park Board must get City Council approval. City Council Vice President Jeff Hancock made the motion to pass Ordinance #3865 in the first reading.

The second reading and public hearing will take place on June 21 at the next City Council meeting.

Decisions have not been made on which projects the park board will pursue. They presented a list of plans to the city council with the bond request. These are the ideas that are in the works for each park.

Projects include paving Osborne Park roads, removing the football press box, and removing all stumps and dead trees that are located in the park. Installing restrooms and softball diamond upgrades including fences, fields, and parking.

Includes paving the parking lot, new shelter in the park, roofing on sections of the armory and new front doors and a floor cleaning machine.

Playground expansion between Shelter 1 and 2, new equipment, restrooms and walkways, additional parking is being added as well. Upgrades on softball diamonds including turning field number two into a varsity field.

Upgrades on shuffleboard courts and horseshoe facility and upgrading the basketball courts, lighting, walkways and trash cans. Removing remaining dead trees that are left in the park.

Install a new maintenance building behind basketball courts and skate park. Equipment for the department including trucks and trailers, mowers and a gator. New fencing for the holding area at the maintenance shed.

For the full ordinance, you can visit the city website at https://tinyurl.com/b9u2k5d8 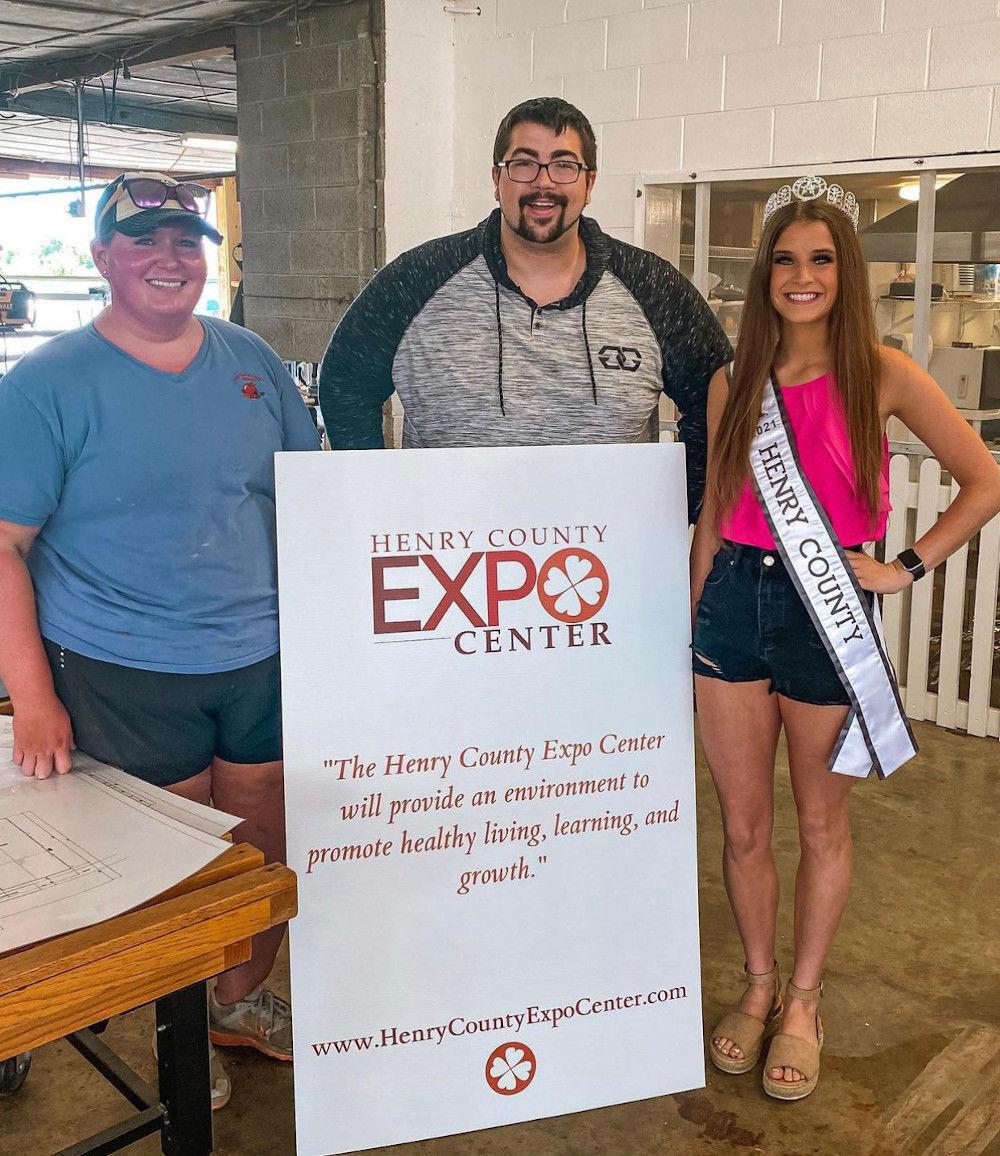 Stephanie Jacobs (left) and her family at sold 150 dozen apple donuts Friday afternoon as part of National Donut Day. The event also served as a fundraiser for the Henry County Expo Center. Stephanie is pictured with Kel McGuire (center) with the Expo and Miss Henry County 2021 Emma-Kate Moore.

New Castle High School had 203 graduates from the Class of 2021. Here are some noteworthy facts from the new graduates:

Nancy Elizabeth Thompson is the daughter of Ron and Donna Thompson. Nancy is the valedictorian of the senior class. She plans to attend Ball State University and major in music education.

Roland Yadman Wong is the son of Raymond Wong and Anna Lam. Roland is the salutatorian of the senior class. He plans to attend Indiana University. He will study cybersecurity.

Sara Joy Quine Espiritu is the daughter of the Rev. M. Rex Espiritu and the late Melissa Quine Espiritu. She plans to attend Indiana University and study education. Sara is third in her class.

William Christopher Grieser is the son of Matt and Anna Grieser. He plans to attend Indiana University and major in sports medicine and exercise science. William is fourth in his class.

Jackson Drew Clapp is the son of Julie Clapp and the late Jay Clapp. He plans to attend Indiana University and study kinesiology. He is fifth in his class.

Molly Paige Alspaugh is the daughter of Jason and Jennifer Alspaugh. She plans to attend Indiana State University and study communication sciences and disorders and psychology. Molly is sixty in her class.

Conner Zade Jarrett Ford is the son of Shawn and Kim Ford. Conner is tied for seventh in his class. Conner will be attending Indiana University East to major in biochemistry or human life sciences.

Jace Allen Logston is the son of Joshua and Mindy Logston. He plans to attend Ball State University and will major in business. Jace is tied for sevent in his class.

Brayden Tyler Ring is the son of Brian and Karri Ring. Brayden plans to study International Business and Law at Wittenberg University. He is ninth in his class.

Macayla Shea McGowen is the daughter of Darvin and Jennifer McGowen. She plans to attend Trine University and study pre-physician assistant. Macayla is 10th in her class.

Ring Winners – 4.0 and above Seniors

Thank you to our community who on Wednesday, May 26, gave over quarter of a million dollars to our students!

Savannah Antrim enlisted in the Army. Antrim is leaving on Aug. 9, for Ft. Sill, Oklahoma for Basic Training and onto Sam Houston, Texas for training in Combat Medic. She has an eight year contract with the Army.

Noah Cupp enlisted in the Army. Cupp is leaving on June 29, for Ft. Jackson, South Carolina for Basic Training and onto Ft. Gordon, Georgia for training in Signal Support System Specialist. He has a four year active duty contract.

A dozen graduating Trojans also completed college credits while in high school through IVY Tech, Ball State University or Indiana University. These students have completed enough credits to have their 1 st year of college completed – meaning a substantial savings to the students and their families:

The following student completed IVY Tech Certifications through the Career Center and prepared to enter the world of work:

EVANSVILLE (AP) — A judge has ruled in favor of a utility in a lawsuit filed over a 2017 natural gas explosion in southwestern Indiana that killed two women and injured three other people.

A Vanderburgh County judge granted CenterPoint’s motion for summary judgment on Tuesday in the civil lawsuit.

The judge found that the plaintiffs failed to produce evidence the utility was negligent and that their negligence directly resulted in the two victims’ deaths and injuries to three others, the Evansville Courier & Press reported.

The June 2017 explosion leveled a house in Evansville, killed Sharon Mand and Kathleen Woolems and wounded a man, a woman and her 10-year-old son.

The three surviving victims and representatives of Mand and Woolems’ estates alleged in their 2019 complaint that the utility, then known as Vectren, was negligent by failing to properly inspect gas lines and warn occupants of a leak. Two of the plaintiffs later withdrew their claims.

CenterPoint filed a motion for summary judgment, alleging there was no basis for the lawsuit.

A senior claims investigator for the utility said in an affidavit that an investigation showed that no Vectren employees had performed work at the residence for at least a year or more before the explosion, and that in the blast’s aftermath, pressure tests on the gas lines did not reveal any leaks.

It is hard to believe that 2020 Carthage Queen Barb Proctor’s reign is coming to an end and a new Queen must be chosen! Barb served her community well and always with a smile on her face, kindness in her heart and words, as well as a sense of humor that is perhaps her most endearing quality!

The Future of Carthage sponsors this fun activity. Female candidates must be current or former residents of Rush County who are 18 years or older. Community members or family are asked to nominate worthy candidates by way of a short essay proclaiming their nominee’s qualifications. The candidates are then required to attend the Summer Event in Carthage on July 17 where the essays will be read and judging will take place. The coronation will be at this year’s Freedom Festival on Sept. 11 where Barb will step down and the new Queen will be crowned and begin her reign by riding in the parade and helping oversee the festival for the day.

Applications can be picked up and returned to any of the following locations; Pavey’s in Carthage, Todd’s Great Outdoors, or the Henry Henley Library by July 10. Please help make this day fun and unforgettable for someone you know that deserves to know just how special they are to you!

INDIANAPOLIS (AP) — An Indianapolis police officer was speeding and made an illegal lane change just before his patrol car struck and killed a pregnant woman last year near a highway ramp, the woman’s boyfriend alleges in a federal lawsuit.

Attorneys for Marcus Lewis Jr. allege that Officer Jonathan Henderson was driving 33 mph over the speed limit moments before he hit 23-year-old Ashlynn Lisby on May 6, 2020, killing her, The Indianapolis Star reported.

“If a civilian drove this recklessly and killed two people, that person would likely face criminal charges,” attorney Stephen Wagner said in a news release. “That person would also lose his or her job if driving a vehicle for an employer at the time of the accident.”

Lisby was more than eight months pregnant with Lewis’ child, according to the complaint, which said the child was born alive through an emergency cesarean section but died moments later. The suit seeks compensatory damages for Lewis for the death of his child, and punitive damages against Henderson.

The city’s Office of Corporation Counsel said it does not comment on pending litigation.

Lisby was struck as she and Lewis were walking on the shoulder of a street just south of an Interstate 465 ramp on Indianapolis’ southwest side, headed to their motel room, the suit states.

Henderson, a 22-year veteran of the force at the time, was in uniform and driving in a police vehicle and on his way to roll call when he struck Lisby.

Lewis’ lawyers say black box data obtained from the crash shows Henderson accelerated to 78 mph – 33 mph above the posted speed limit – and made an illegal lane shift over a solid white line as he positioned his vehicle into the right turn lane.

The suit alleges that Henderson checked his rearview mirror as he prepared to turn onto I-465 and his car drifted over the right fog line when he struck Lisby, whose body left an elliptical dent in the hood of his car and cracked his windshield.

Lewis’ lawyers allege that IMPD attempted to cover up the incident by preparing a crash report that lists the primary cause of the accident as the “pedestrian’s action.” That crash report states that none of Henderson’s actions played a contributing role in the accident, they allege.

“The accident report does not mention that Henderson was speeding, made an illegal lane shift, and was driving partially on the shoulder ... when he struck Ashlynn,” according to the complaint.