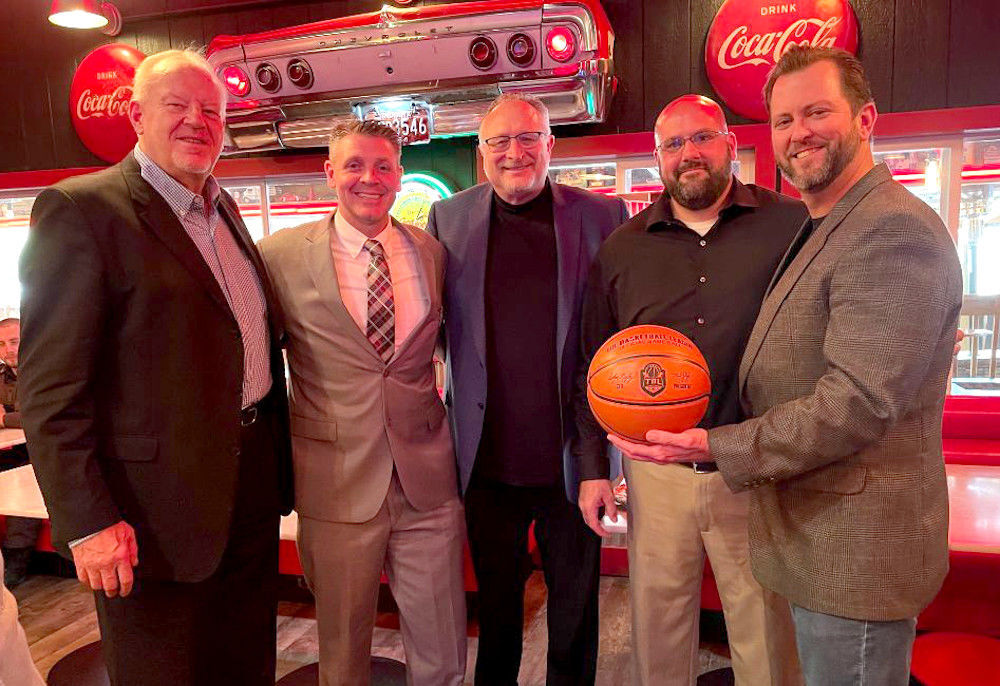 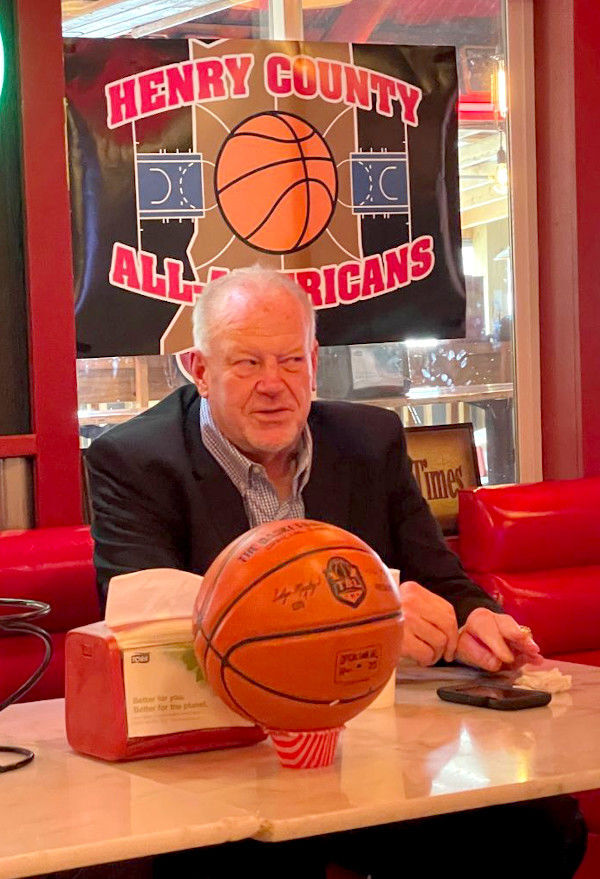 LEFT: With the new team name in the background, Kent Benson talks about the Henry County All-Americans during a media event Tuesday at 1000 Degree Wood Fired Pizza in Mount Summit. RIGHT: 1978 Mr. Basketball Dave Magley, commissioner of The Basketball League, discusses the high expectations for players both on and off the court. 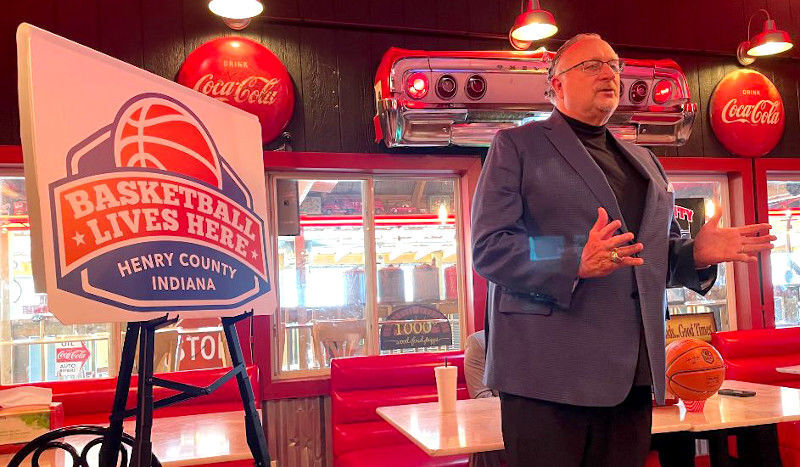 1978 Mr. Basketball Dave Magley, commissioner of The Basketball League, discusses the high expectations for players both on and off the court.

LEFT: With the new team name in the background, Kent Benson talks about the Henry County All-Americans during a media event Tuesday at 1000 Degree Wood Fired Pizza in Mount Summit. RIGHT: 1978 Mr. Basketball Dave Magley, commissioner of The Basketball League, discusses the high expectations for players both on and off the court.

1978 Mr. Basketball Dave Magley, commissioner of The Basketball League, discusses the high expectations for players both on and off the court.

During his stellar career, New Castle basketball legend Kent Benson was always striving to take his game to the next level. The awkward freshman worked hard and became a high school All-American then Mr. Basketball. The high school star became a college All-American and led the Indiana Hoosiers to an unbeaten season en route to the National Championship. The college All-American became a No. 1 NBA draft pick and went on to play 11 seasons in the NBA for Milwaukee, Detroit, Utah and Cleveland.

Tuesday, Benson was taking not only a game, but an entire league to the next level. After the initial season of the Hoosier Hardwood Basketball Association in 2020, Benson announced two of the four teams had combined talents and would become the Henry County All-Americans, playing in The Basketball League (TBL)

“I am extremely excited about what this partnership is going to do for this county,” Morgan said. “We’re super, super excited. I truly want to get this community behind this basketball team. We’ve got the Hoosier Gym, we’ve got the Hall of Fame, we’ve got the world’s largest and finest high school Fieldhouse and now we have the Henry County All-Americans professional basketball team.”

The team name is most appropriate, considering the driving force behind it all.

“What a great guy to be the head of the All-Americans because he was a four-time All-American, first in high school and then at IU,” said Magley, referring to Benson.

Magley, the 1978 Indiana Mr. Basketball, is the league president. His wife, Evelyn Magley, made history as the first African American woman to ever own a male professional sports league in the United States. Together, they have founded the TBL.

But even as he welcomed Benson’s All-Americans to a new league, Magley said he couldn’t pretend to be in the same one as the New Castle Trojan and IU Hoosier great.

“I was also a Mr. Basketball, but there’s a big difference between Kent Benson and Dave Magley,” he said.

Magley praised Benson’s tenacity – both on the court and in the middle of life’s unpredictable challenges.

“This is a man who, in the last year, has had a lot to deal with,” Magley said, “The loss of a wife and a brother, the replacement of both knees and open heart surgery. Yet when we’re going to Lafayette, he turns to me and says ‘there’s a 101-year-old World War II veteran named LeRoy Good. I need to go see him.’

“LeRoy lives in Frankfort in the middle of nowhere,” Magley continued. “His tiny home features pictures of LeRoy when Rome was freed during World War II. This guy (pointing to Benson) takes time out of his day to make LeRoy’s day. There’s nothing LeRoy can do now for Kent Benson. But Kent goes and sees him because in Kent’s eyes, LeRoy is an important person.”

The story epitomized what Magley wants to see the TBL become.

“If we teach our young men how to use the power of celebrity the right way, we can change communities,” Magley said.

First look at the All-Americans

The Henry County All-Americans will be coached by John Benson, Kent’s nephew, who led the New Castle NightHawks to a runner-up finish last season in Hoosier Hardwood Basketball Association play.

“It was extremely exciting last year to have players on the floor who just enjoyed playing basketball,” John Benson said. “I think with this TBL, it’s going to be huge for the players.”

The Henry County All-Americans will play a 24-game season – 12 at home and 12 on the road – starting in March and running through May, with playoffs in June. Like the NightHawks, the All-Americans’ home court will be Blue River Valley Junior-Senior High School.

The Basketball League started five years ago with eight teams, grew steadily to 29 and this year may have as many as 48, stretching from Atlantic City to San Diego.

Benson said community involvement will again be a key part of the game plan, with youth basketball games played before the All-Americans’ tip-offs and lots of interaction opportunities between kids and players.

“We will be offering all county schools, choirs, bands, JROTC as well as boys and girls youth basketball teams and cheer squads, the opportunity to perform at our games,” Benson said.

All games will be available on live streaming as well. Every team has an TBL website.

As exciting as the NightHawks were last year, the All-Americans figure to be loaded with talent. Kellen Dunham, the Pendleton sharp-shooter who went on to play at Butler, may actually be a member of the New Castle team next March.

“Larry Bird said he’s one of the best shooters he’s seen in years,” said Bob Petty, a close friend of Kent Benson who served as the Hoosier Hardwood league’s president last year. “He’s also a great guy off the court, one of those high quality character guys we like to have.”

For John Benson, it’s a relief to potentially have Dunham in his line-up instead of his nightmares, trying to figure out how to defend against him.

“Coaching against him last year was tough,” John Benson said of Dunham. “Trying to prevent him from shooting and making shots was almost impossible. The possibility of having him on the team now is a huge relief.”

In fact, it was Dunham’s last-second three-pointer that gave the Pendleton Legends a championship game victory over the NightHawks in the Hoosier Hardwood Basketball Association finale last season.

Other roster possibilities are Sean Sellers, a 6-7 shooting guard from Greensburg; Brandon Hassell, a 6-11 center/power forward who played for Penn State; Aaron Larson, a 6-8 shooting guard who is Taylor University’s assistant coach; and Lewis Jackson, a four-year starter at Purdue who led the NBA’s G-League in assists a few years ago.

Other options for the team include Joe English, an exciting player for the NightHawks, and Jeff Early, who played college basketball at Southern Illinois.

Remembering his high school years and the exciting run to the IHSAA state finals in 1971, Benson believes the Henry County All-Americans can reignite basketball passion that always simmers here.

“We feel New Castle and Henry County is absolutely right for professional basketball,” Benson said. “When I was playing in high school, I remember the downtown sidewalks would be painted green and white with store windows decorated. It wasn’t just for tournament games. It was for every game.”

Tuesday, the new tourism logo summed things up nicely. Basketball indeed lives here, and next March, the All-American days of the past will quite literally be here again.