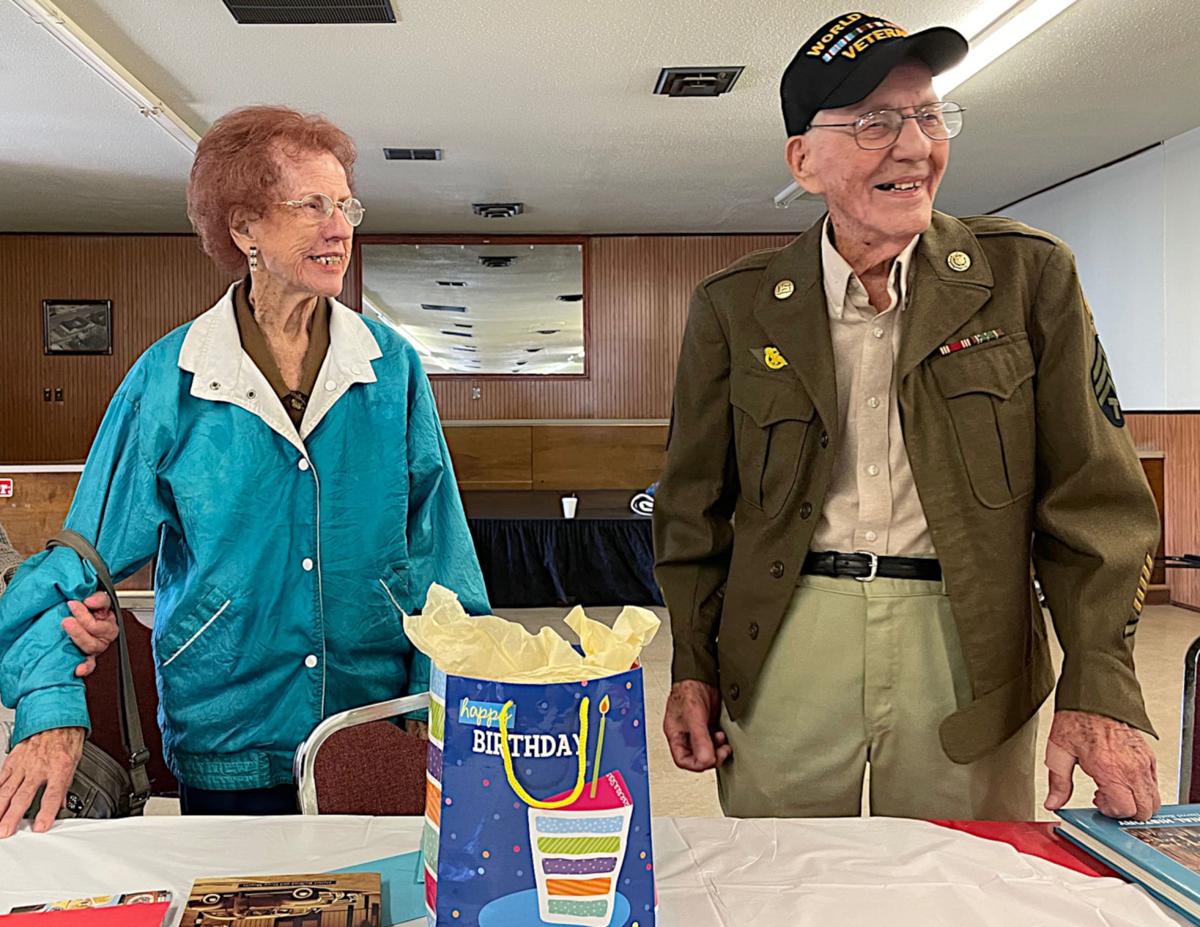 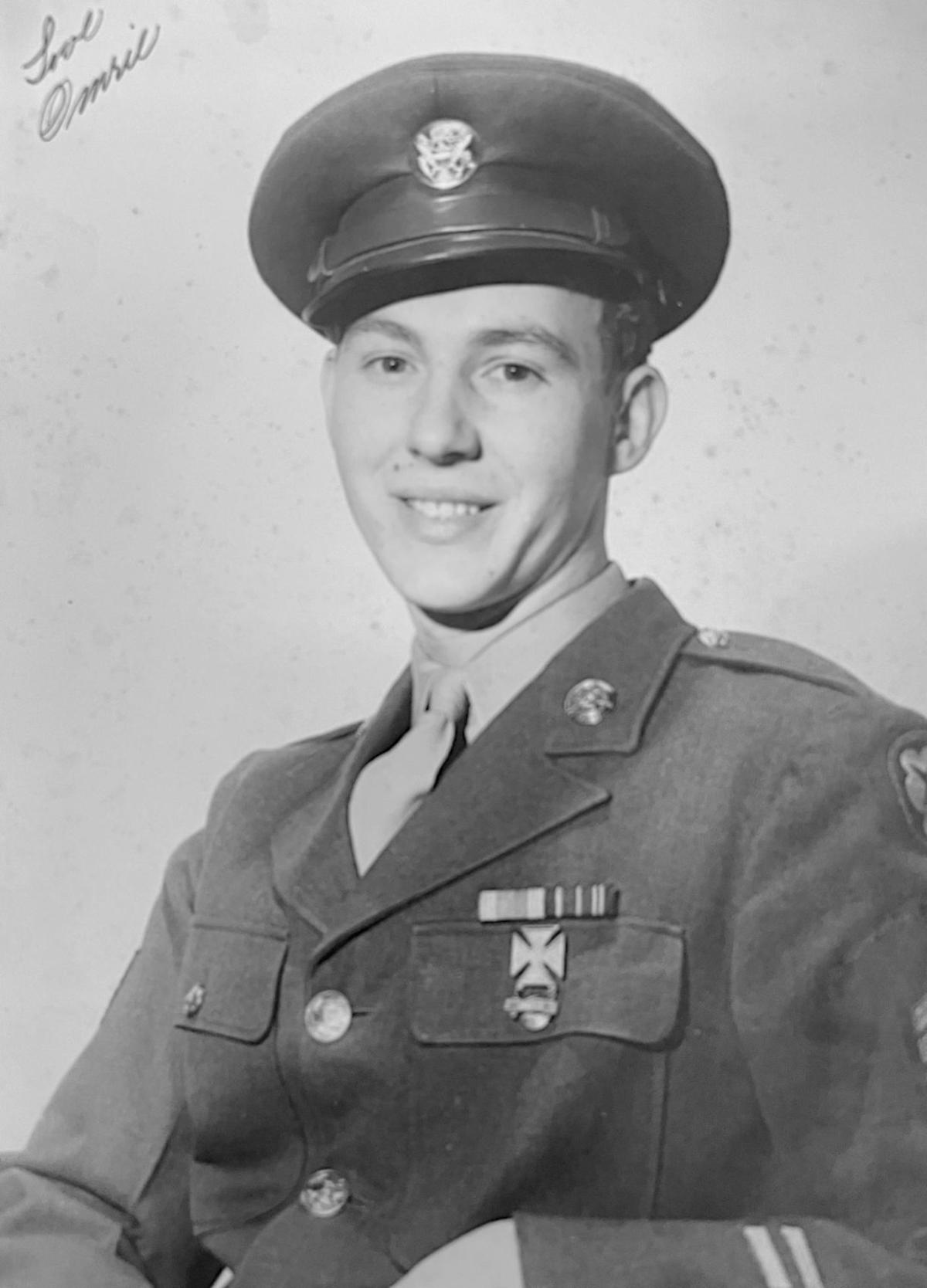 This is how Omrie Harmon looked when he served in the military. His military jacket still fits. Last Saturday was the first time he’d worn it since World War II ended in 1945. 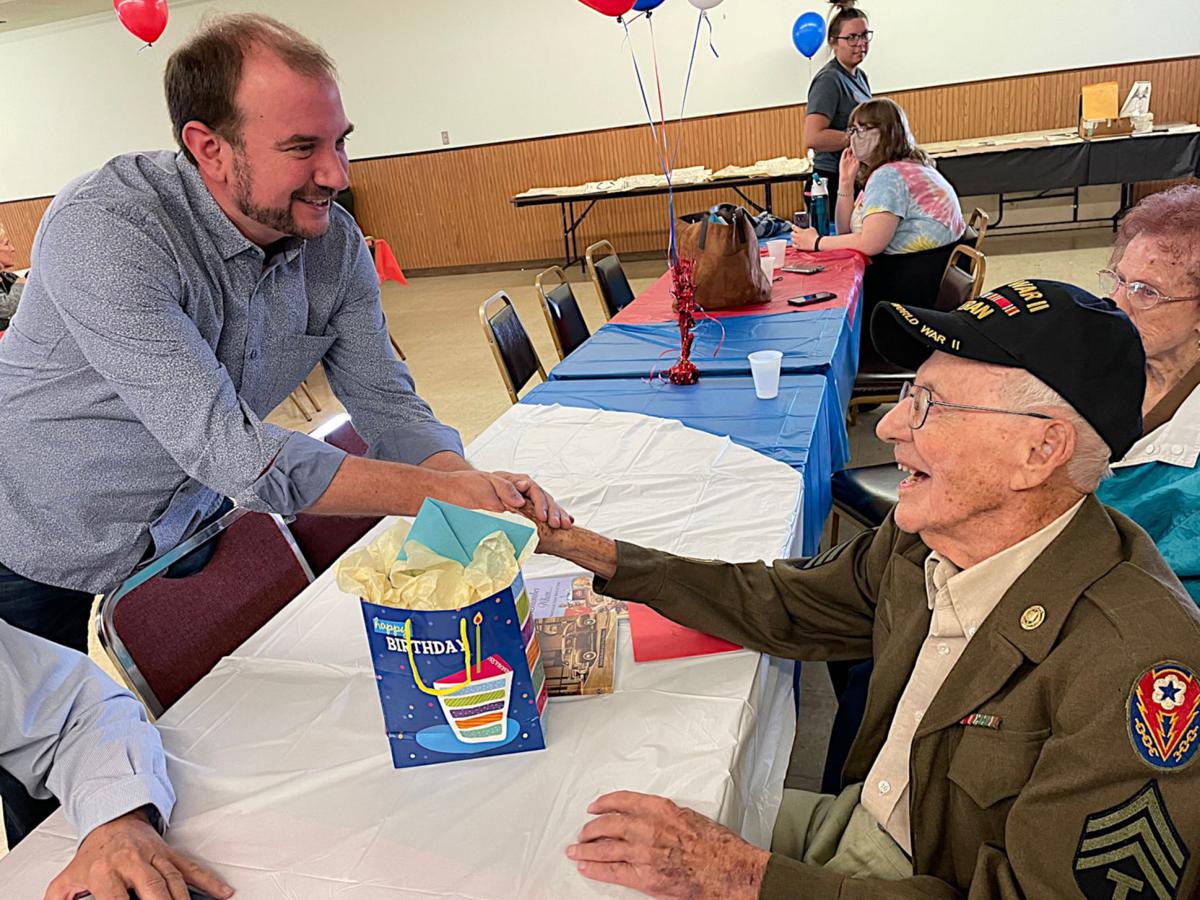 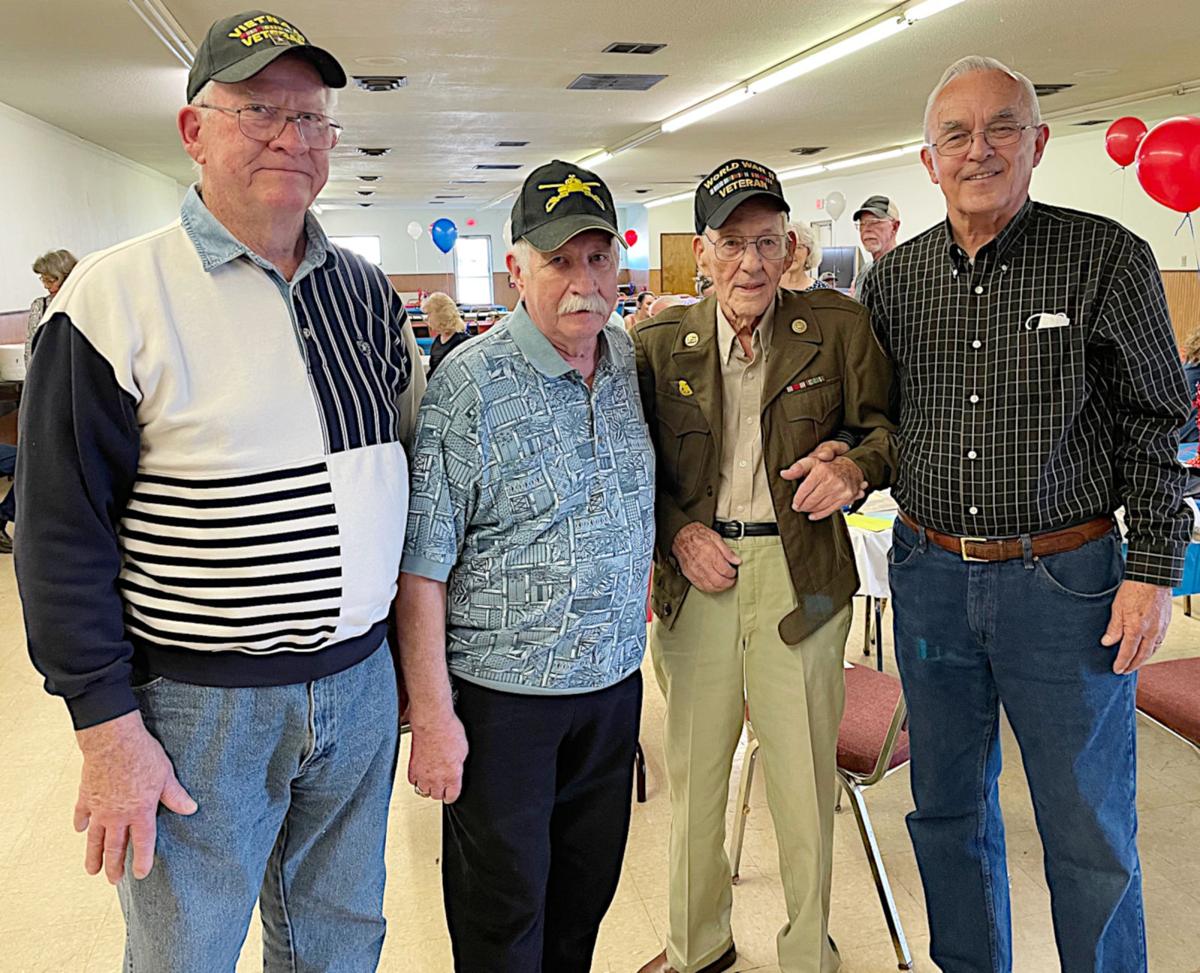 This is how Omrie Harmon looked when he served in the military. His military jacket still fits. Last Saturday was the first time he’d worn it since World War II ended in 1945.

Not many people live to be 100 years old. Even fewer, it would seem, can drive themselves to their own 100th birthday party.

But that’s exactly what Omrie Harmon did recently.

The World War II veteran named for a Biblical king was, indeed, the man of the hour last Saturday at the New Castle VFW Hall.

“I’ve been waiting 100 years to tell you this,” local car dealer Lonnie DeHart teased Harmon as he wished his former business partner a happy birthday.

New Castle Mayor Greg York said, “I don’t know of a man that I’m any more proud of than Omrie Harmon.”

As if the 100th birthday party wasn’t impressive enough, family and friends had a second reason to celebrate: the 79th wedding anniversary of Harmon and his wife, Geraldine. They were married Feb. 14, 1942.

Born March 20, 1921 to Elmer and Cloda Harmon, Omrie gave a look of astonishment when a reporter asked, “Can you still drive?”

Omrie said he started driving when he was about 14 or 15 years old and “had a license before you had to have them.”

Omrie came dressed for the occasion. He was wearing his U.S. Army jacket, which still fit perfectly more than seven decades after he served. Omrie said it was the first time he’d had the jacket on since being discharged in 1945.

“It’s not even tight,” York said of Harmon’s jacket.

While Harmon was the man of the hour, many in attendance said the “honor” was theirs in knowing a man whose long life has been lived with such dedication and dignity.

“What an honor it is to have somebody who has served our country, served our community and lived for the Lord,” York said. “He started the Yellow Cab company, had a car lot for what seemed like a hundred years, knew how to run a business, figured life out, had a beautiful wife and family.

“Omrie, we are so grateful for you and your example, your legacy and your love for the Lord,” York concluded.

Gracious, funny and humble, Harmon made one thing perfectly clear during his 100th birthday celebration.

“I am no hero,” he said. “The heroes are the ones who passed away, who never made it back to the United States. And some of those were guys I knew in my outfit.”

Harmon did have a unique military task during World War II. He drew maps for the D-Day invasion of Normandy to be used after the swarm of U.S. soldiers landed on the beaches. A mechanical draftsman, he said his top-secret assignment required armed guards outside his door while he and another soldier worked.

The big crowd of admirers erupted in laughter when Harmon told the story of his return to New Castle after World War II ended.

“I caught a bus home,” Harmon said. “I don’t know if any of you remember how 14th and Broad used to be, but it was so busy at that time, you could hardly walk. I got off the bus and thought I saw my wife and his brother. They didn’t know I would be coming home that day.

“Well, I thought I’d surprise my wife,” Harmon continued. “I walked up behind her, grabbed her and gave her a big kiss – and saw that it wasn’t even my wife. It was my wife’s sister! You talk about being embarrassed.”

There was no reason for Omrie to be embarrassed Saturday. Presentations in his honor were made by State Rep. Saunders, York, Foursquare Church Pastor Jim Becker and others.

“He not only survived 100 years of life, the Great Depression and a world war, but also the virus,” Saunders said in reference to COVID-19, which has taken so many elderly people in the past year.

“I have birthday greetings from the Indiana General Assembly,” Saunders said. “I had an opportunity to meet with the governor on Friday. He wanted me to be sure and extend to you his best wishes and thanks for your service, not only for our country, but the State of Indiana. And he wishes you many more.”

Judy King, a VFW chaplain and Iraq combat veteran herself, presented Harmon with colorful quilt. She said he may be receiving something in the mail from U.S. Rep. Greg Pence as well.

Harmon was a living local history book at his 100th birthday party.

He remembered when the Maxwell-Briscoe Automobile Factory was in operation. He talked about how his father-in-law would catch the interurban at Springport and ride back and forth to New Castle for his job at that factory.

Then, a reporter showed him a Nov. 7, 1935 photo of a crash involving an interurban car and a fire truck in front of the New Castle post office.

“I remember when that happened,” Omrie said.

Omrie said he knew Sidney Baker, New Castle’s only four-time mayor, for whom Baker Park is named. He remembered the infamous Perfect Circle strike here in 1955 and actually sent pictures of the scenes to the Associated Press. He talked about his dad working for the Hoosier Kitchen Cabinet Factory.

And speaking of dads, Omrie, who owned Harmon Motor Sales for 30 years, told Rep. Saunders, “I sold your dad a car.”

Talk of the Old Sears Building brought back memories for him, too. Not of shopping when Sears and Roebuck operated a three-story department store in downtown New Castle. Rather, of a roller skating rink on the third floor.

When asked for the secret of their 79-year marriage, Geraldine simply said, “We believe the same way. We both love the Lord.”

The 100-year-old who still drives continues to have his eyes firmly affixed on the road ahead.

Saunders summed up the grand occasion.