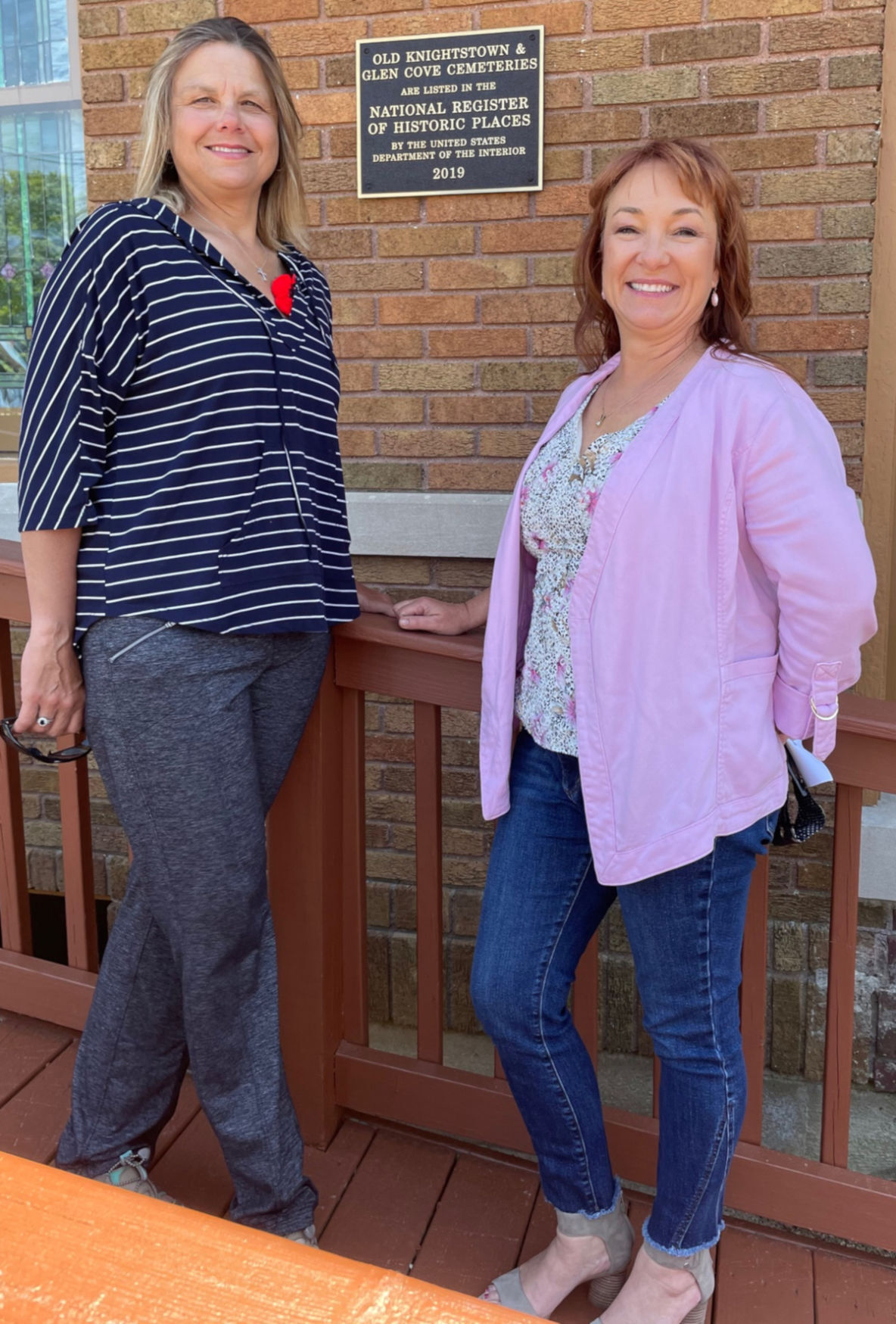 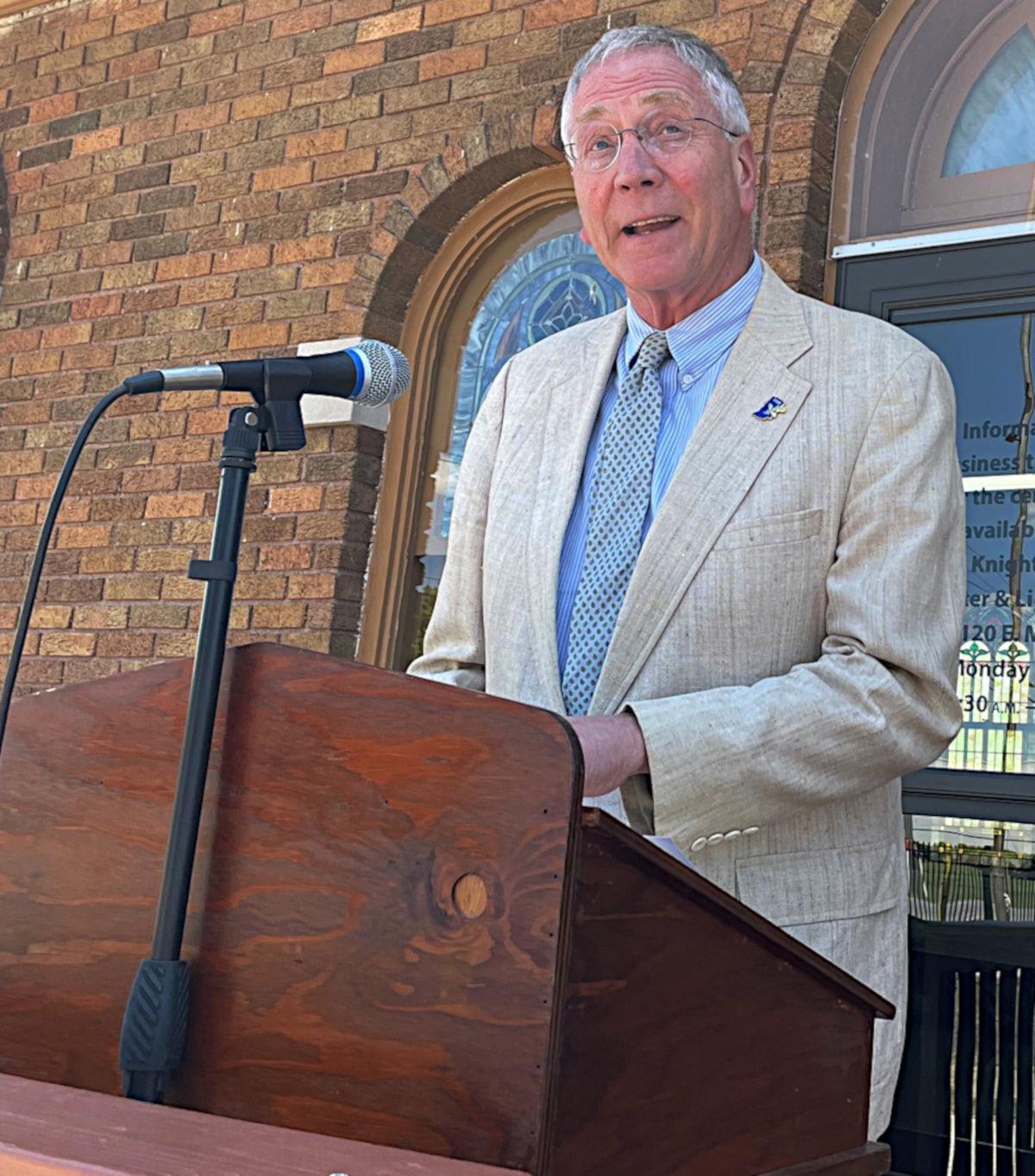 Historian William Selm talks about how Glen Cove Cemetery came to be and the unique features that make it National Register worthy. 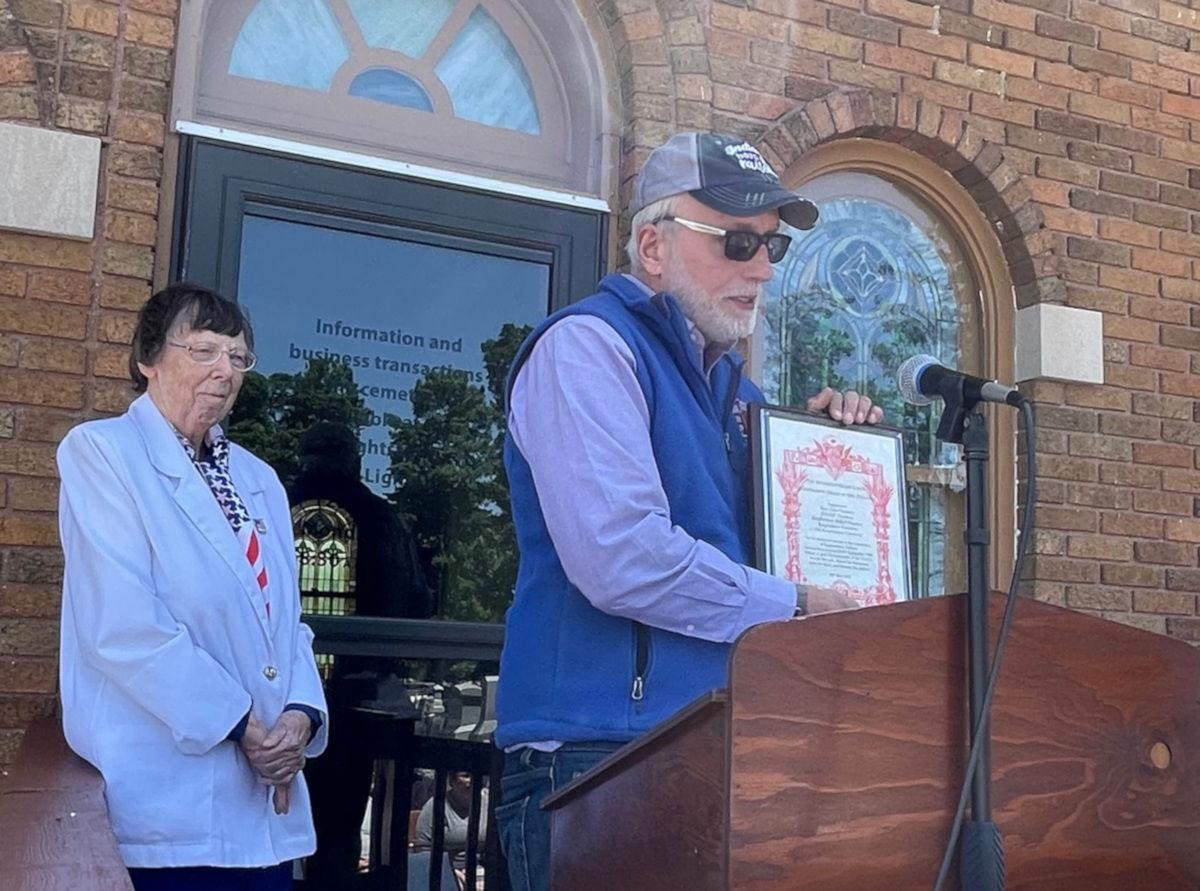 Kevin Richey reads a plaque from the International Order of the Odd Fellows. It was local Odd Fellows Chapter Knightstown Lodge No. 99 that led the effort to create Glen Cove Cemetery. 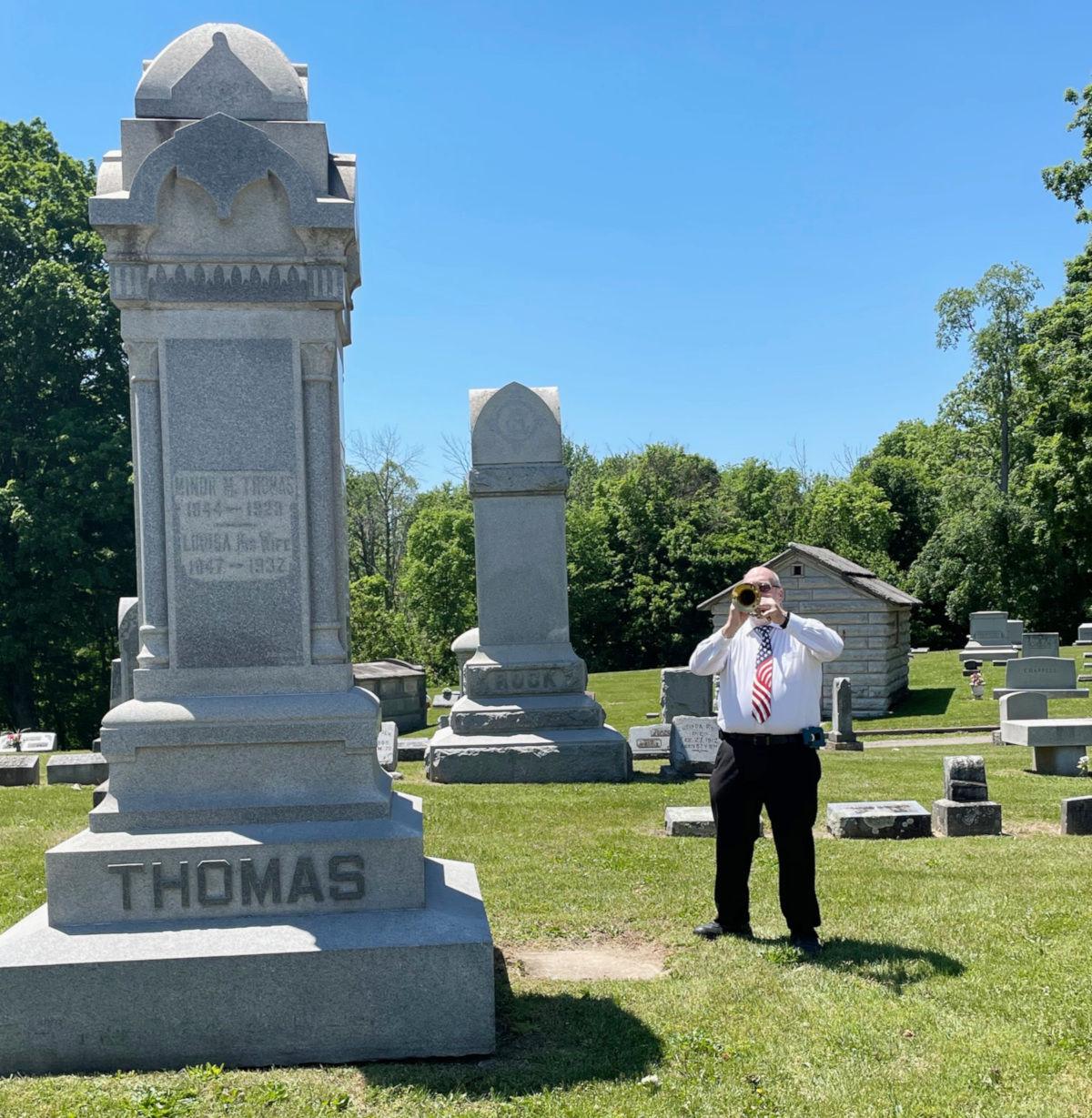 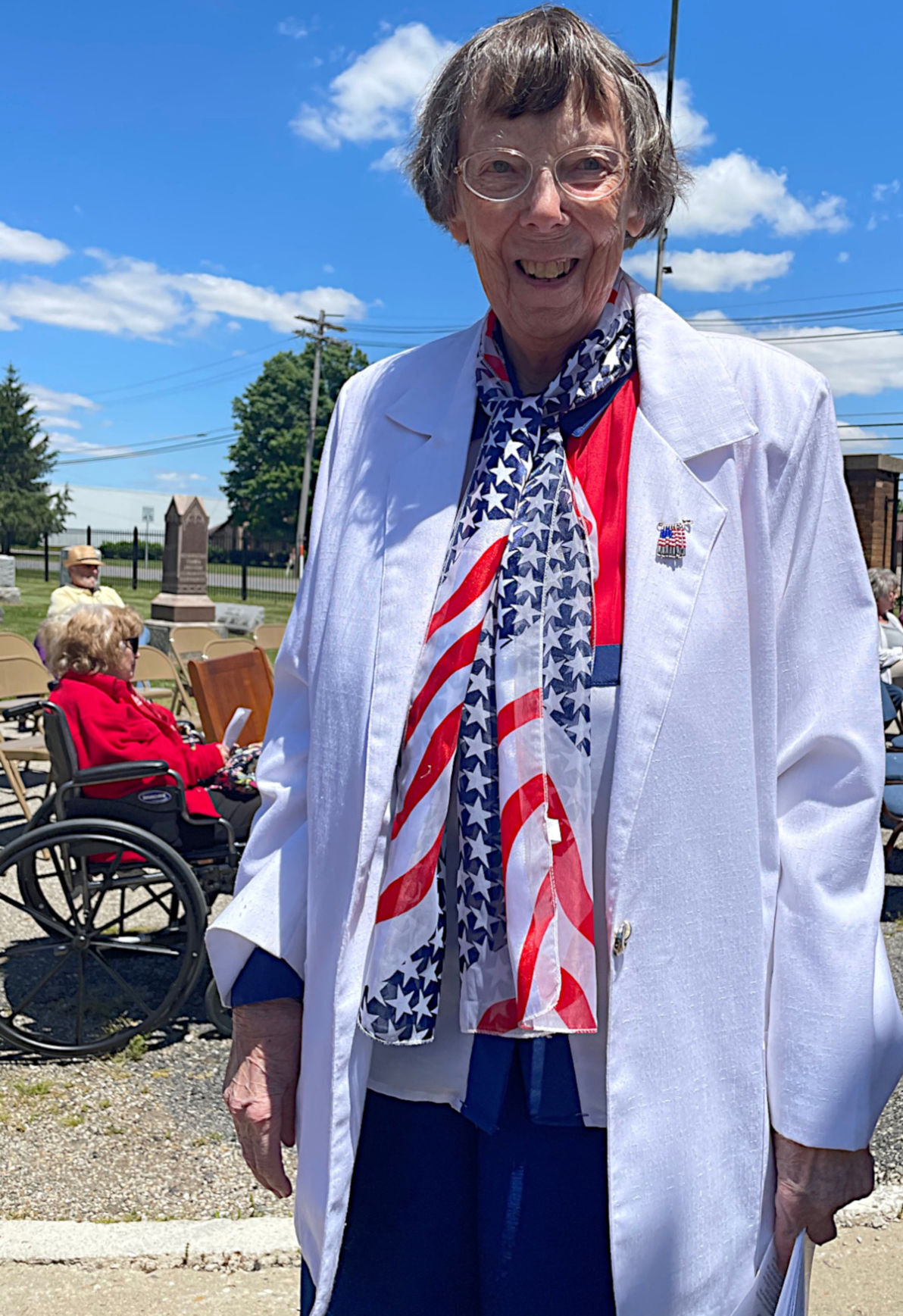 Historian William Selm talks about how Glen Cove Cemetery came to be and the unique features that make it National Register worthy.

Kevin Richey reads a plaque from the International Order of the Odd Fellows. It was local Odd Fellows Chapter Knightstown Lodge No. 99 that led the effort to create Glen Cove Cemetery.

KNIGHTSTOWN — For nearly three decades, Barbara Carter heard a common question at the Antique Mall she and her husband owned.

“People came from all over the United States and commented on how beautiful Glen Cove Cemetery looked,” said Carter, vice president of Historic Knightstown, Inc. “They always asked if something special was going on in town. There were so many flowers. The chapel was so unique and the fountain was beautiful.”

Carter’s reply? “You know, she just looks that way all the time.”

Today, the flowering praise for Glen Cove Cemetery is more than just words. Like the ornamental letters on its variety of funerary art, the significance and magnificence of the facility is now etched permanently in the National Register of Historic Places.

Carter told the story Sunday during a Memorial Day weekend ceremony to recognize Old Knightstown and Glen Cove Cemetery’s inclusion on the National Register. Bright sunshine and blue skies blended with patriotic music and heartfelt remarks to celebrate the occasion. Brotherly love was beautifully expressed for the facility by Robin Richey, who performed patriotic and spiritual music on his keyboard, and younger brother Kevin Richey, who read a certificate from the International Order of Odd Fellow.

“The Odd Fellows mission is to visit the sick, relieve the stressed, bury the dead and educate the orphan,” Kevin read. “My past is here, your past is here, our family is here.”

Unique in many ways

Sarah Ward, president of the Glen Cove Cemetery Advisory Board, presided over Sunday’s program with the same passion and care her late parents, Ralph and Susie Ward, showed for 40 years. Her dad was treasurer of the cemetery and her mother often had the task of typing up records.

When Denise Peacock and Stephanie White-Longworth unveiled the official National Register marker Sunday, its golden letters shined a light on nearly 140 years of history, the roots of which extend from the approximately 2,200 people buried here to national and even international cemetery movements.

The combined cemeteries became just the 14th site in Henry County added to the National Register in June of 2019. Since then, Henry County Memorial Park has also been added, giving the county 15 entries on the coveted list.

But of all the county places now on the National Register, this one might be the most unique. Or perhaps the appropriate word is “Odd.”

Historian William Selm of Indianapolis served as keynote speaker for the occasion and described in vivid detail how the International Order of Odd Fellows in Knightstown, No. 99, made it their mission to take the lead in providing “an adequate cemetery suitable for a community.”

It was a common mission for Odd Fellow organizations throughout the state. Selm said state architectural and archaeological database records show 76 Odd Fellow cemeteries in 32 of Indiana’s 92 counties.

But Glen Cove Cemetery stands out, Selm said, “as the largest with the most picturesque design and terrain of all.”

“This cemetery has distinctive features – a fine collection of funerary art and its planned landscape and the Knightstown cemetery holds the graves of many of the town pioneers,” Selm said. “The combined cemetery is significant in American and local history as a product of the rural cemetery movement of the 19th century. This is especially the case for Glen Cove.

“Glen Cove is the work of two professional cemetery designers,” Selm continued. “The Glen Cove design embraces the natural landscape of the locale. The curved and linear paths frame the sections following the contours of the landscape. The combined cemetery expresses the changing style of the funerary art and design with its fine collection of antebellum headstones, Victorian and early 20th century monuments and mausoleum. The combined cemetery also includes four historic contributing buildings – the biggest and best one, the one right behind me, the 1915 chapel, but others include a boulder faced bridge, a cast-iron memorial fountain and monumental steel fence with matching gates.”

It was Odd Fellow J.D. Barrett, then lodge secretary, who advocated that the Odd Fellows should take the lead in Knightstown to provide “an adequate cemetery suitable for a community.” In 1883, the town acquired 3.5 acres of land to use as a cemetery. Barrett saw the cemetery expansion as an opportunity for the Odd Fellows to do something worthwhile and of lasting benefit to both town and community.

Founding of Glen Cove Cemetery was a local expression of a national movement of the Odd Fellows, who were founding cemeteries throughout the United States in the 19th and early 20th centuries.

On Sept. 30, 1887, the lodge purchased 17.5 acres immediately north and contiguous to existing public cemetery. The following month, the Odd Fellows hired John Chislett, who was, at the time, the assistant superintendent of the Crown Hill Cemetery in Indianapolis.

“So I consider this the daughter of Crown Hill – without the Hill,” Selm said. “Now Chislett, his grandfather, is the engineer who laid out Crown Hill Cemetery. Chislett’s father, Frederick, was the first superintendent.

Glen Cove is not a person

“Now he’s not buried here,” Selm said. “Glen Run is the creek down there, which is a tributary to Montgomery Creek.”

Selm said the first burial of this new cemetery was Odd Fellow Morris Bundy in 1886. Also among those buried here is Waitsel M. Carey, who is credited with founding Knightstown in 1827. He was the one who named the town in honor of Jonathan Knight, the engineer for the National Road that runs through the community.

The remains of former residents from as far away as California, Texas and Florida have been returned for burial here.

Lots of help over the years

Many over the years have helped maintain, preserve and improve the cemetery, people like late newspaper publishers and community leaders Tom and Peg Mayhill. Tom Mayhill diligently researched and published the first real cemetery records here.

From 1923 until 1996, the local Odd Fellows lodge here was in charge of the cemetery. They were active in raising funds to reset stones and place markers as needed. In 1996, the local lodge with its membership aging and dwindling, transferred control back to the town of Knightstown.

Today, a Glen Cove Advisory Board consisting of Denise Akers, Denise Peacock, Stephanie White-Longworth, Sarah Ward, Wanda Olsheske and Joe Harding oversee the cemetery and its needs. Anyone interested in helping keep one of the newest National Register of Historic Places looking good – either through volunteer manpower or monetary donation – is encouraged to call the town office at 765-345-5977 or visit the Glen Cove Cemetery Facebook page.

Poignant feeling in the air

Sunday’s program also had a distinctive Memorial Day feeling in the air.

Pastor Tony Darling’s prayer gave thanks “for those who have stormed foreign shores, flown over foreign skies, parachuted on foreign ground and sailed foreign seas … in pursuit of liberty and freedom. Pat Cronk performed stirring renditions of “The Star Spangled Banner” and “The Battle Hymn of Republic.” Ally Piper, a youth, read the poignant World War I poem “In Flanders Fields.”

A hush spread among the crowd as Larry Wheat played “Taps.” A sense of encouraging irony also wafted through the breeze. During a ceremony for a place where more than 2,200 people are buried, it was obvious both the Odd Fellows legacy and Knightstown community pride are indeed alive and well.

Darrel Radford is a retired staff writer and former editor of The Courier-Times. He currently serves as Henry County’s official historian. You may contact him at d.radford@comcast.net.