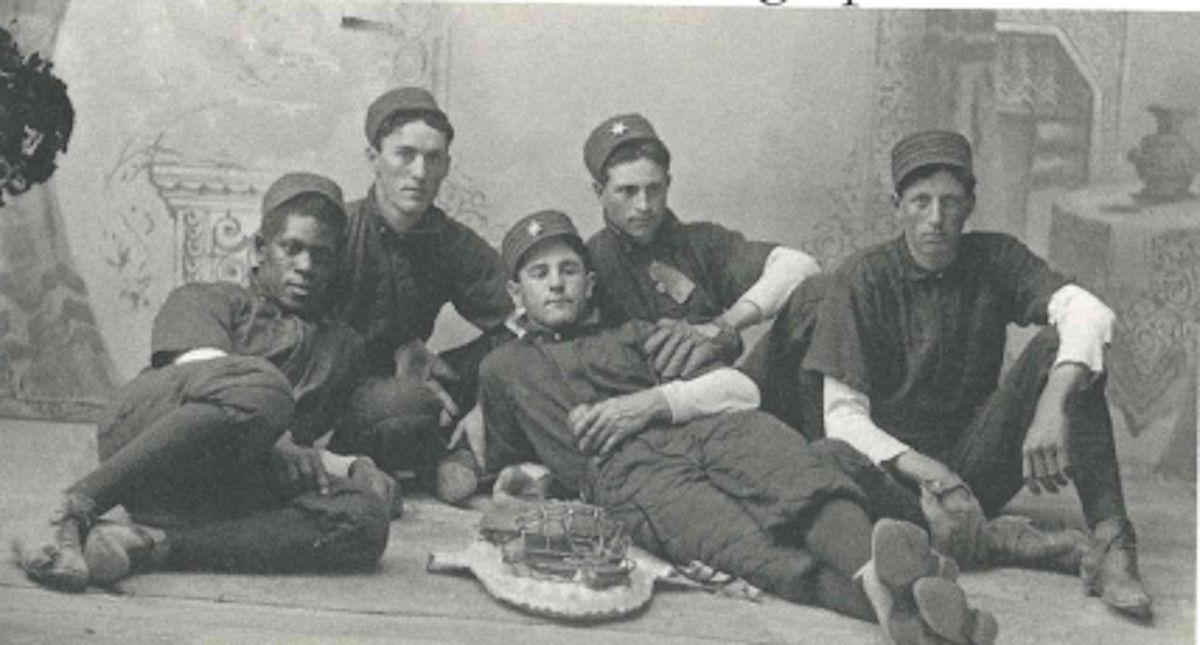 The Spiceland Academy baseball team, including (l-r) John Merida, John R. Thompson and Emory Ratcliffe who broke societal norms by posing for a photograph together in 1900. 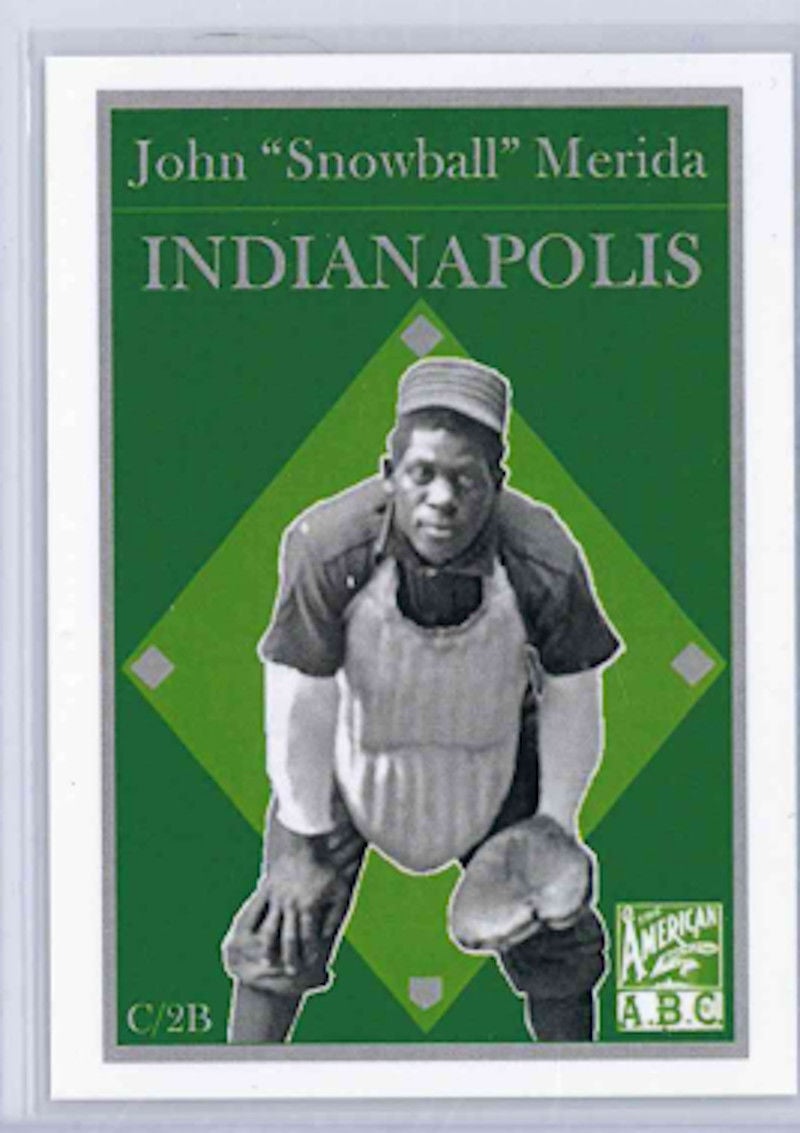 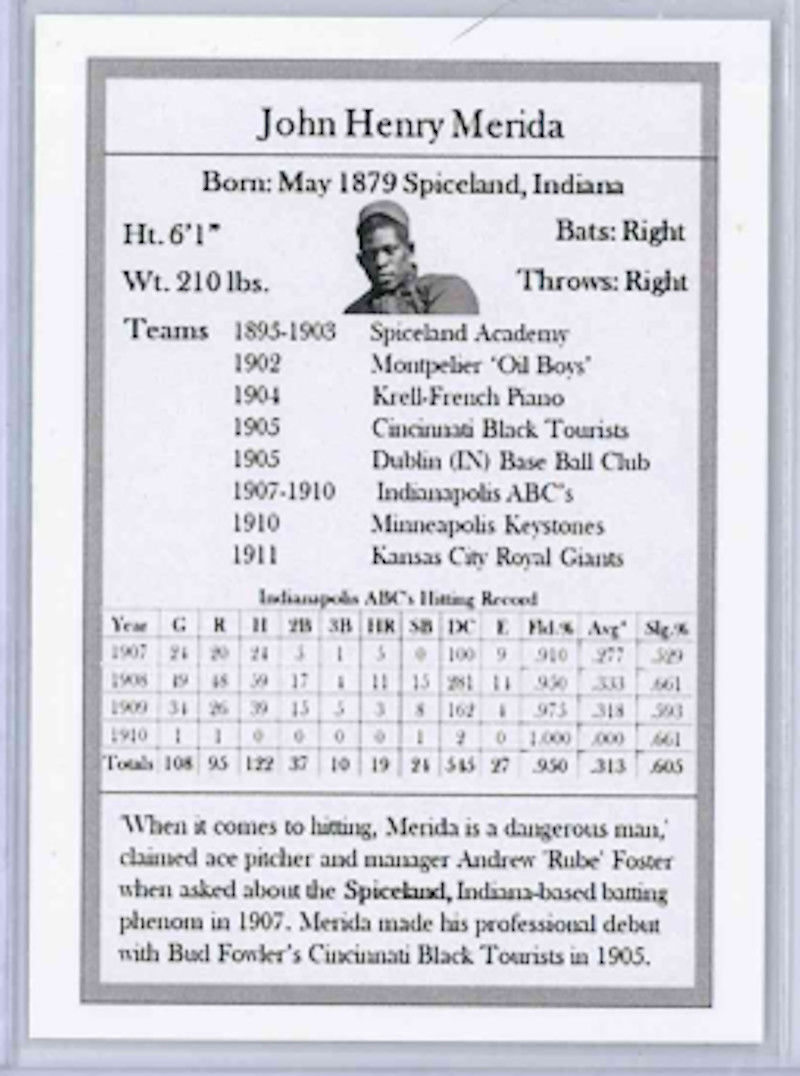 On the back of John “Snowball” Merida’s baseball card are some eye-raising statistics. 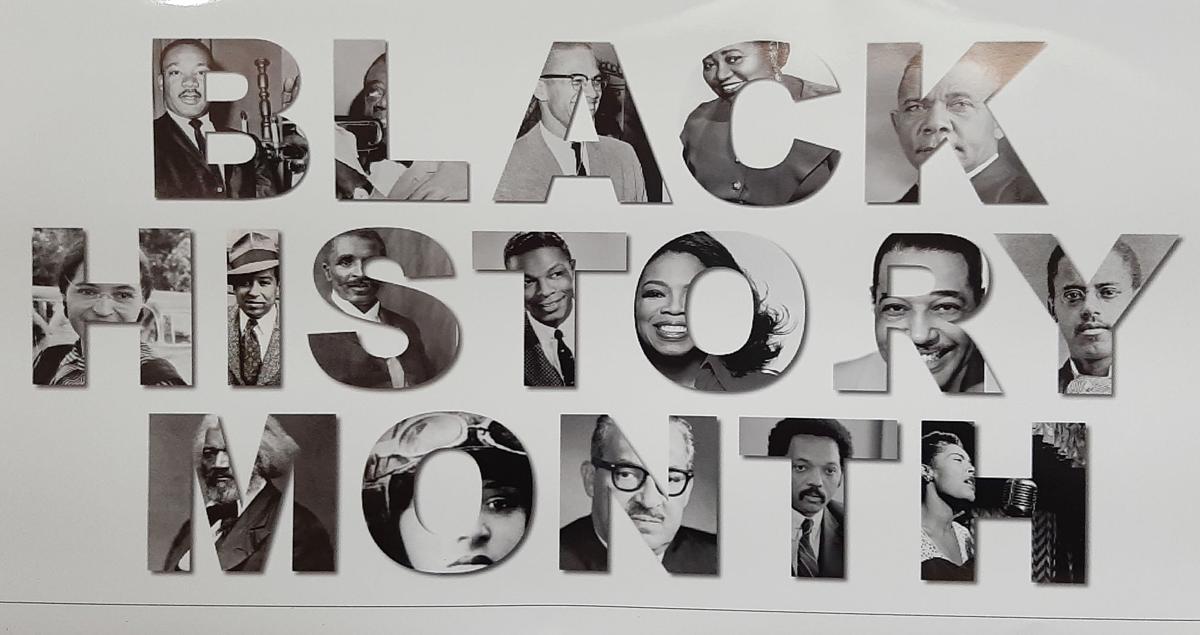 The Spiceland Academy baseball team, including (l-r) John Merida, John R. Thompson and Emory Ratcliffe who broke societal norms by posing for a photograph together in 1900.

On the back of John “Snowball” Merida’s baseball card are some eye-raising statistics.

One might say John Merida’s popularity “snowballed” every place he went.

From Spiceland Academy to the Krell-French New Castle team and the Montpelier ‘Oil Boys,” people from all parts of the Midwest flocked to see him hit a baseball.

His athletic prowess continued professionally for the Cincinnati Black Tourists and the Indianapolis ABCs. His personality and athletic ability also made headlines for the Minneapolis Keystones and the Kansas City Royal Giants.

A book on the Spiceland man who could have, would have and should have been a major leaguer was published not long ago. Written by Alex Painter of Richmond, the book, entitled “Baseball Immortal: The Odyssey of Trailblazing Slugger John ‘Snowball’ Merida, is an interesting read for any Henry County resident interested in black history, baseball or just a plain good story, for that matter.

“When it comes to hitting, Merida is a dangerous man,” ace pitcher and manager Andrew ‘Rube’ Foster said when asked about the Spiceland phenom in 1907.

Why was he nicknamed ‘Snowball?’ Painter explains in his book.

“Merida is incredibly affable and unwaveringly friendly,” Painter wrote. “After every game at Spiceland Academy, he would get mobbed by all the fans (especially the children), regardless if they won or lost. It was because of his friendliness he garnered his more famous nickname – ‘Snowball.’ After his time was over at the Academy, he played for local semi-pro teams all over east central Indiana, sometimes still being the only black player on the team. Merida got his big break in 1907, when he was signed by the Indianapolis ABCs.”

In 108 games from 1907 to 1910 with the Indianapolis team, ‘Snowball’ had a batting average of .313, hit 19 home runs and earned a slugging percentage of .603. A slugging percentage is defined as the total number of bases a player records per at-bat.

The more Painter learned about ‘Snowball,’ the deeper entrenched he became in this incredible story.

It was Spiceland Field Day, and the small southern Henry County town grew “by several hundred percent” to enjoy the multi-faceted event.

Appearing on the list of participants that day, according to Painter’s research, was John Merida.

“Given the demographics of Henry County, it is probable he was one of a handful, but possibly the only person of color competing in the contests,” Painter wrote.

Merida toed the line in the 100-yard dash. When the starting pistol sounded for the race to begin, it had all but ended.

“With a blend of speed and grace, Merida, never taking his eyes off the finish line, crossed the ribbon in first place,” Painter wrote. “He had left the entire pack of competitors in the dust.”

The very next year at the same event, Merida’s speed took a back seat to his strength.

“Every time the teenager swung the bat, the ball whistled through the air, alternating between blistering line drives and fly balls which cut across the Indiana sky in perfect arcs,” Painter wrote. “Regardless of the launch angle, the ball continually traveled distances thought improbable by the thousands of dazzled spectators.”

After Merida was crowned winner of the hitting contest, he was soon swarmed at home plate, Painter wrote.

“The men were giving him congratulatory back slaps and offering to buy him a concession from one of the vendors,” Painter wrote. “Others had already beaten them to it, thrusting glass bottles of soda or cooked ears of corn in his direction. A throng of doting children, some of his biggest fans, clung to his cotton wool knickerbockers and followed his each and every step.”

When the individual contest was over, Merida took his talents to the Spiceland Academy dugout and led his hometown team to a 23-12 pounding of county rival New Castle.

NEXT: We conclude our three-part series on John ‘Snowball’ Merida with a look at his professional highlights and an interview with Alex Painter, the author who wrote a book about this special athlete. The book “Baseball Immortal: The Odyssey of Trailblazing Slugger John ‘Snowball’ Merida” is available at Amazon.com.