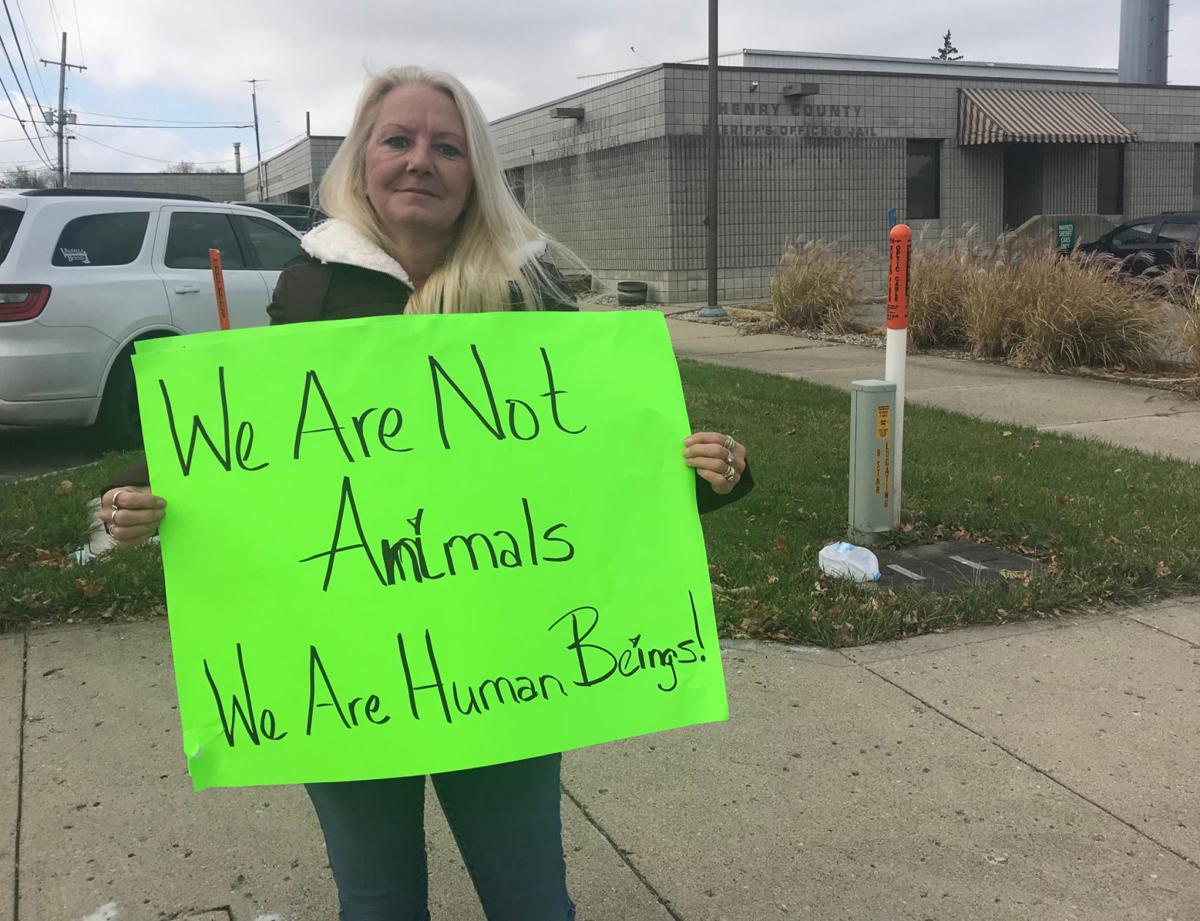 Joanna Myers holds a sign out in front of the Henry County Jail Friday proclaiming the inmates are human beings, not animals. 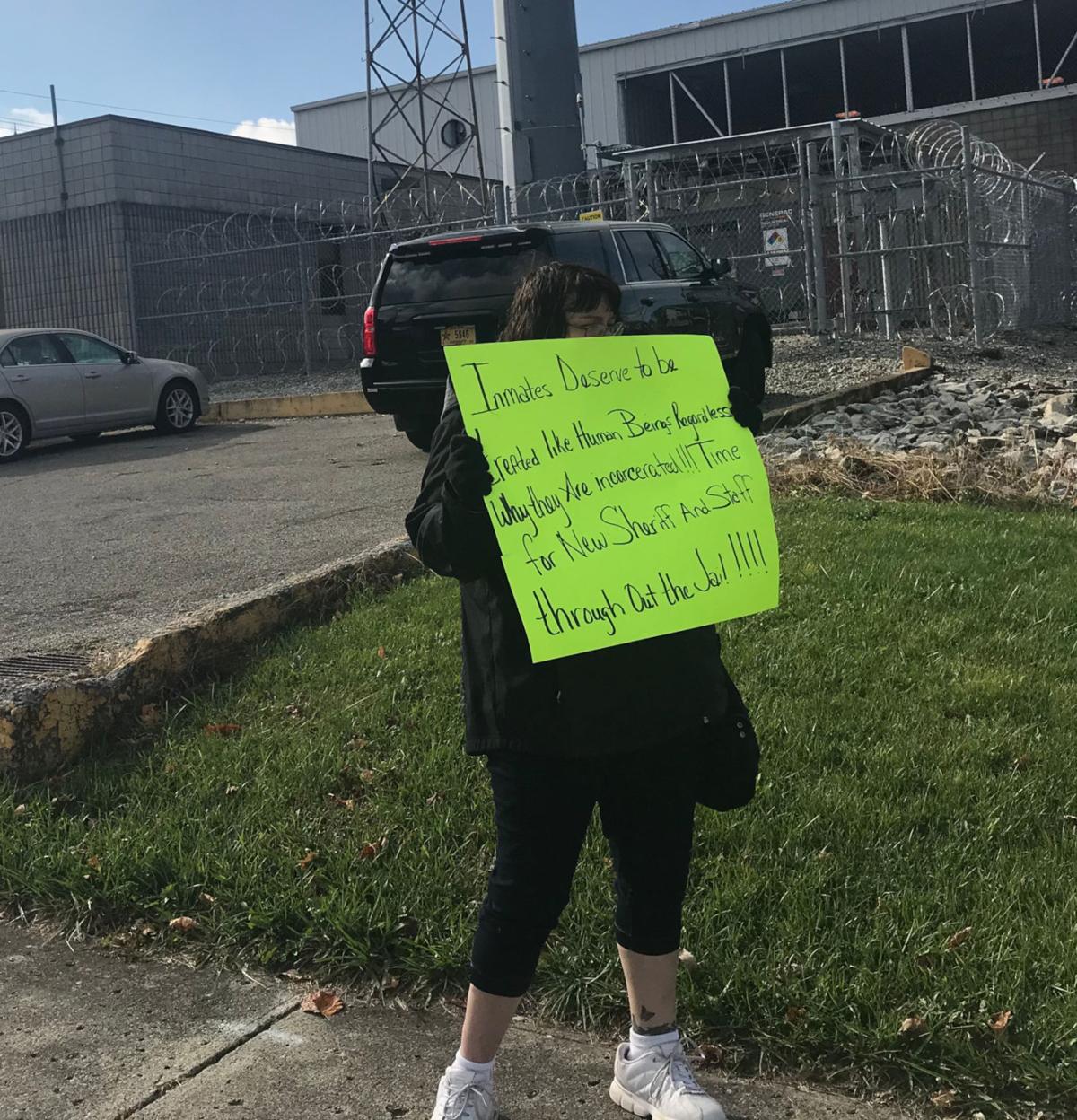 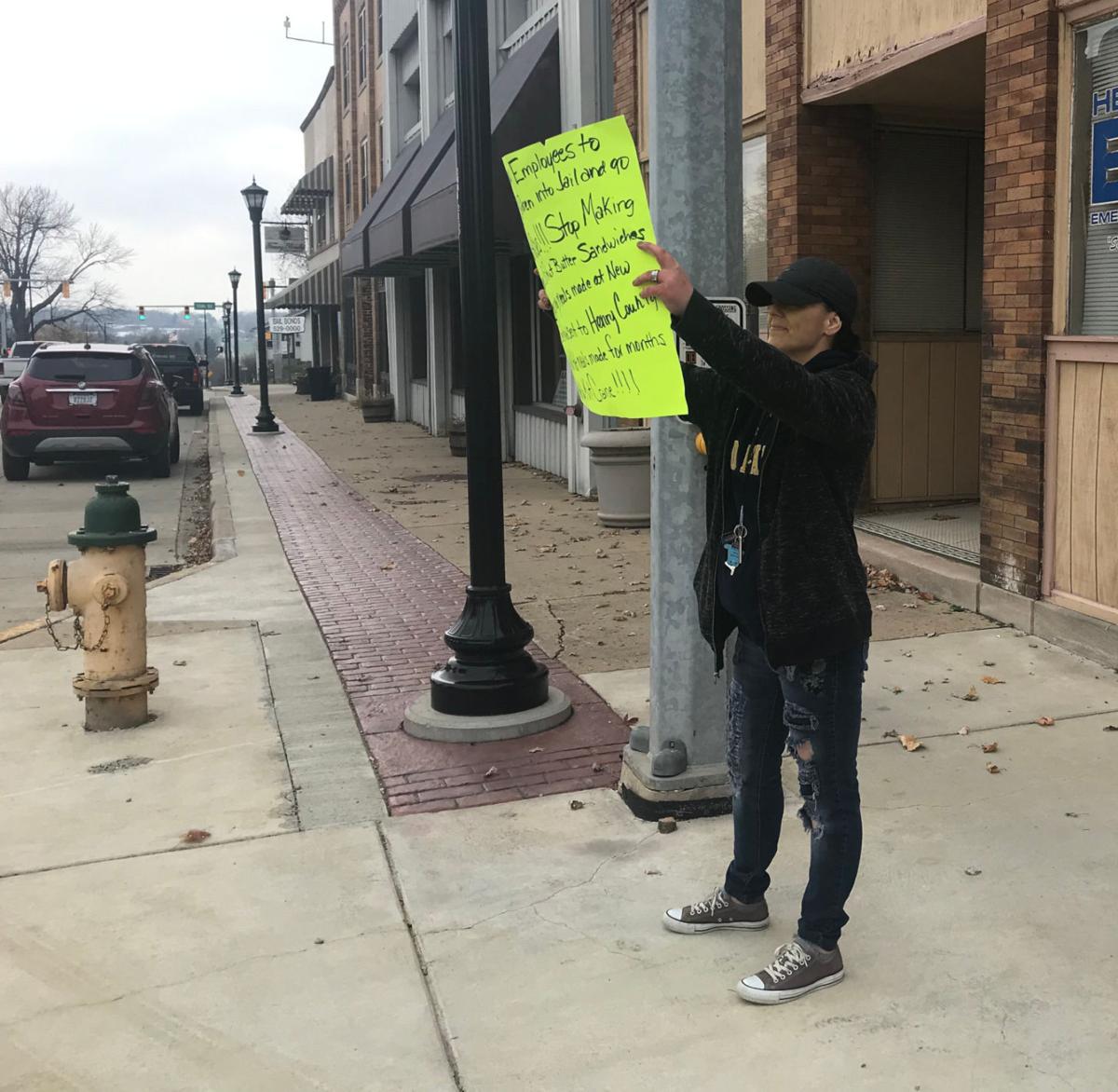 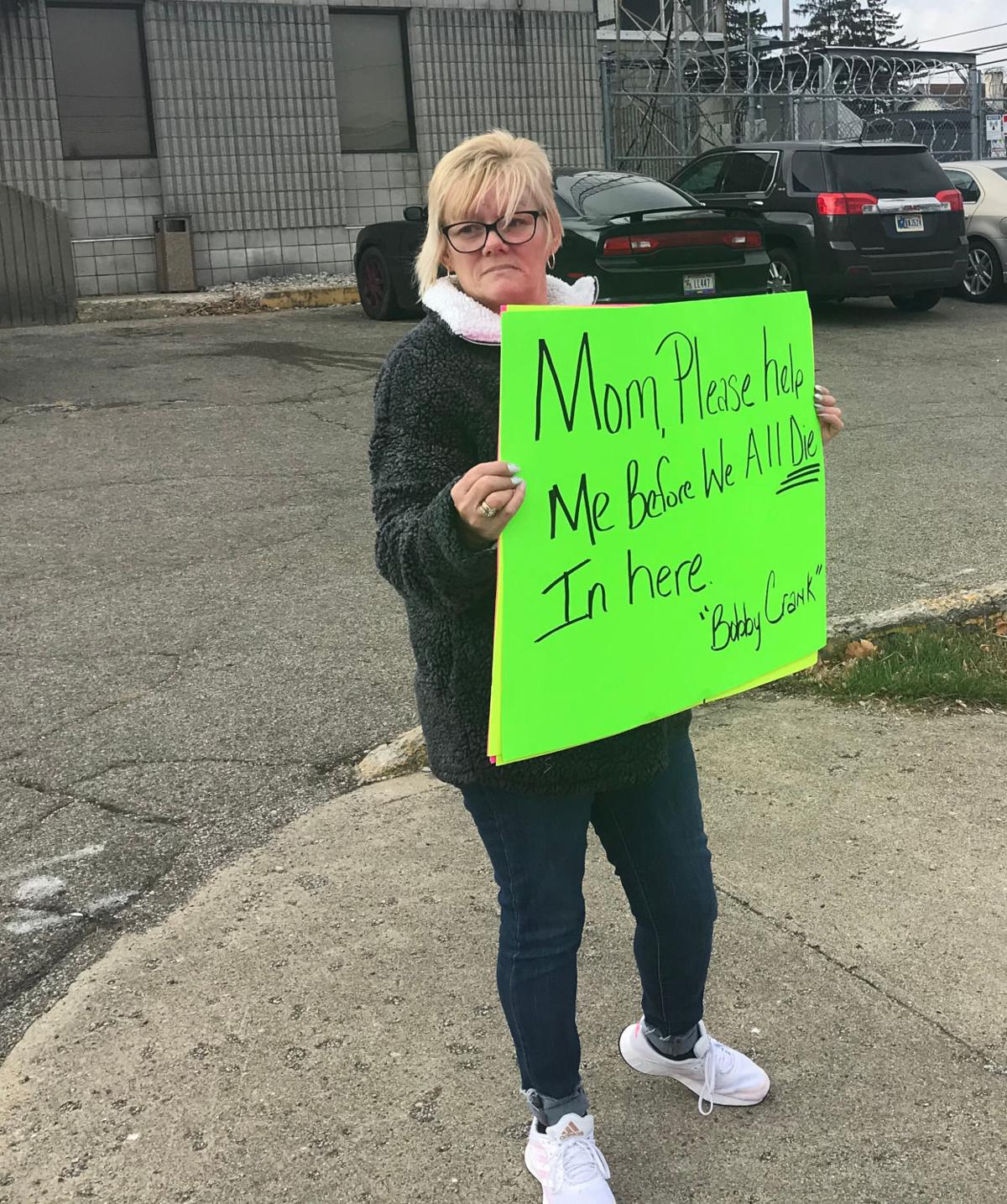 Kelly Ralston holds up a sign containing a friend’s son’s plea: “Mom please help me before we all die in here.”

Joanna Myers holds a sign out in front of the Henry County Jail Friday proclaiming the inmates are human beings, not animals.

Kelly Ralston holds up a sign containing a friend’s son’s plea: “Mom please help me before we all die in here.”

“No hot meals for months. Wake up Kit Crane.”

“Mom, please help me before we all die in here.”

“We are not animals. We are human beings.”

Signs of difficult times for the Henry County Jail and its neighboring Transition Center were literally held up for all to see, as a group of concerned family members protested in brisk, windy conditions Friday.

“We’re just out here trying to get them some treatment,” Heather Flynn said. “They’ve been eating peanut butter three times a day.”

“My son begged to be sent to the hospital because of being COVID positive,” Joanna Myers said. “My son told them for five days in a row he was sick. They have an inmate in a cell right now who has been vomiting blood. He has not been taken out for medical treatment. He can’t even stand on his own. It’s getting really bad in there.”

“I am responding at the request of Sheriff McCorkle,” Davis said. “Yes, the Henry County Jail, as with the vast majority of other correctional facilities in Indiana and across the United States, has some cases of COVID-19 virus amongst both the inmates and staff. We have worked hard using various methods of quarantine for the inmates and screening of staff to prevent the introduction and spread of the virus into the facility. As a matter of fact, we were one of the few jails in the state to have had no known cases until about three weeks ago. As we suspected would happen as in most correctional facilities, once we had the first positive case, we ended up with several.

“We have worked with not only our inmate medical provider Quality Correctional Care, but the Henry County Health Department, State Department of Health, and the Medical Director, and administrative staff of the Indiana Department of Corrections to assure we have the best advice and suggestions from these sources as well as the CDC, in helping us to manage the influx of the virus in our jail,” Davis added.

“To this we have found that some of the inmates are not happy with the recommendations and practices put in place in attempt to rid or slow the virus from the jail, however, rest assured we are cautiously following these recommendations and have had continued conversations with the various experts from each organization, which guides how we proceed daily,” Davis emphasized.

“We know that many families are concerned for their loved ones who are incarcerated, and assure them that amidst this pandemic and uncertainty, we are continuing to reach out for advice and using the recommendations provided,” Davis concluded. “To those family members, please know that the jail cannot just release those detainees, that there is a legal process through the courts, and that all the Henry County Judiciary, and the Prosecutor, have daily reviewed the list of inmates and have made adjustments to bonds and other holds to help reduce the population at our jail.

In an interview with the Courier-Times, Davis elaborated on the situation.

Davis said the meals currently served at the jail consist of cereal at breakfast, a lunch meat sandwich at lunch and a peanut butter sandwich in the evening.

No hot meals are being served at the present time. Davis said there was no provision in Indiana statute to provide hot meals.

The kitchen at the jail has been closed for about two weeks, Davis said.

Complaints about lack of treatment for COVID-19 drew this response from Davis.

“We do have some COVID patients,” said Davis, who is just recovering from COVID-19 himself. “Quite honestly, my treatment plan was fever reducer and plenty of liquids. It depends on what symptoms an inmate has as to how they get treated.”

Some of the moms complained there was no doctor on staff at the jail. Again, false, according to Davis.

Davis said a licensed physician is the medical director of that company and that a full-time RN and a part-time nurse were also on staff.

“We have 72 hours of nursing care a week here,” Davis said.

As to the overcrowding complaints of those protesting, Davis said things were better now than they have been this year. He reported Monday there are currently 88 at the jail, a facility that was built for 76, and 45 in the “transition center” on Broad Street.

“The judges have spent a lot of time in the last couple of weeks – and they have all year – in reducing our population,” Davis said. “COVID added to the need to do that but obviously because of the overcrowding situation, the judges work every day, reviewing the list, seeing if there are any adjustments that can be made with bonds. Two weeks ago, when this hit us, the judges took a hard look at who was here and if there were some they could reduce the bond some, speed up their sentencing date, to help us lower that population more.”

Many of the moms protesting cited living conditions and cleanliness as a major concern. Davis responded: “Understand that inmates are responsible for cleaning their own living areas. The jail staff are not responsible for that. The inmates are provided three times daily – it used to be once a day, now it’s three times daily, with disinfectants to wipe their bars down, things such as that. We’ve also recently purchased two different fogging machines that treat surfaces in the hallways to help prevent the spread of COVID as well.”

The moms said their intentions behind the Friday protest was not mean-spirited.