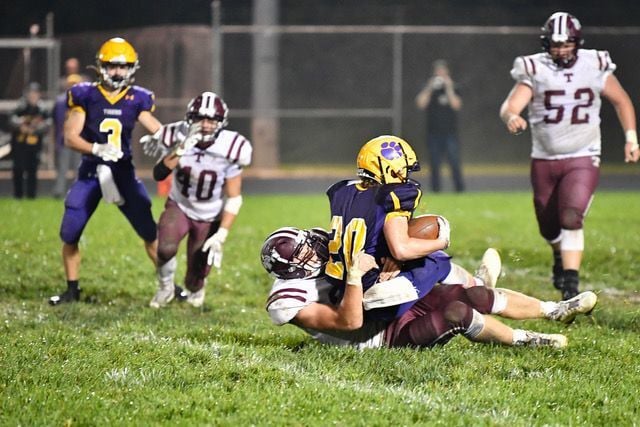 In addition to his big offensive night, Tri junior Parker Burk (24, on ground) was also a major contributor on defense, as shown here with his tackle of Hagerstown’s Collin Beaty (20) during Friday night’s TEC football game at Hagerstown. 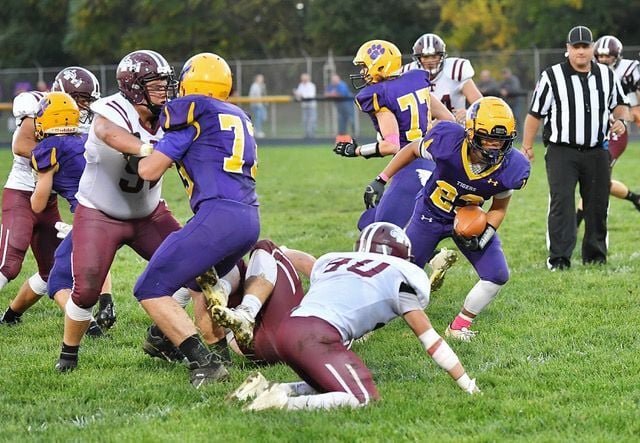 Hagerstown senior Kadence Roman (23) was the top target for Tiger quarterback Kayne Ervin against Tri during Friday night’s football game at Hagerstown. He caught six passes for 49 yards and one touchdown.

In addition to his big offensive night, Tri junior Parker Burk (24, on ground) was also a major contributor on defense, as shown here with his tackle of Hagerstown’s Collin Beaty (20) during Friday night’s TEC football game at Hagerstown.

Hagerstown senior Kadence Roman (23) was the top target for Tiger quarterback Kayne Ervin against Tri during Friday night’s football game at Hagerstown. He caught six passes for 49 yards and one touchdown.

Coach Andrew Totheroh’s offensive juggernaut claimed its third victory in a row Friday with a 48-26 triumph over Hagerstown. It was the fifth time in eight games Tri had scored 40 points or more.

The 6-2 Titans have averaged 55 points per game during their current three-game winning streak. In its six victories, Tri has scored almost 49 points per contest.

There is little trickery to Tri’s offensive magic this season. Just give the ball to junior Parker Burk.

Friday night, Burk was virtually unstoppable. He rushed for 165 yards on 11 carries and scored three touchdowns. Burk also caught a pass for 17 yards.

Anyone who doesn’t believe in the power of consistent weight room workouts should just watch Burk run. His longest run of the night went for a 55-yard touchdown.

“The big difference I see from Parker as a sophomore to this season is his strength,” Coach Totheroh said. “He made a big commitment to the weight room and got stronger heading into this season. He actually set our school power clean record at 270 in the winter. He naturally has a big frame but with added strength it makes it tough for people to bring him down.”

“Our offensive line has really been clicking these past couple of weeks,” Totheroh said.

Overall, the Titans ground out 295 yards on 29 carries – an average of 10.2 yards, a first down every time Tri junior quarterback Mason Wilson handed the ball off during the game.

In addition to Burk’s roughshod running, three other Titans rushed for 31 yards or more. Junior Gary Paull finished with 38 yards, with classmates Kyran Huffman and Wilson adding 32 and 31 yards, respectively.

Wilson may not have been an offensive yardage leader in Friday’s win, but the Tri quarterback certainly was the director, engineer and choreographer of it all. He completed 4-of-6 passes for 75 yards and two touchdowns. His quarterback rating at game’s end was a near-perfect 149.3.

“Hagerstown was giving us a look Friday night defensively that we thought we could hit some passes on,” Totheroh said. “We hit one for a big play then the momentum kind of kept rolling so we hit another. Mason Wilson did a great job getting the ball to receivers.”

Christian McLemore caught two passes for 35 yards and a touchdown, while senior Josh Rich had one pass reception for 23 yards. Burk also had a 17-yard catch.

Defensively, Mondrush – the one who made the holes for Burk on offense – joined him in closing up gaps on defense. Wilson, the quarterback on offense, had an interception on defense.

“Vance Dishman, Ferrell and Vaughn also had solid games for us on defense,” Coach Totheroh said.

For Hagerstown, it was the sixth consecutive loss after an opening game victory. Tri heard the Tiger growl often during the game, especially with Hagerstown’s ability to recover on-side kicks.

“I thought Hagerstown did a really good job controlling the game in the second half. Those onside kicks are tough to recover, if you don’t recover them then they get the ball with momentum and only half the field to drive. They got in a rhythm Friday night and we couldn’t stop it. I was really impressed with Hagerstown’s fight. They never stopped playing.”