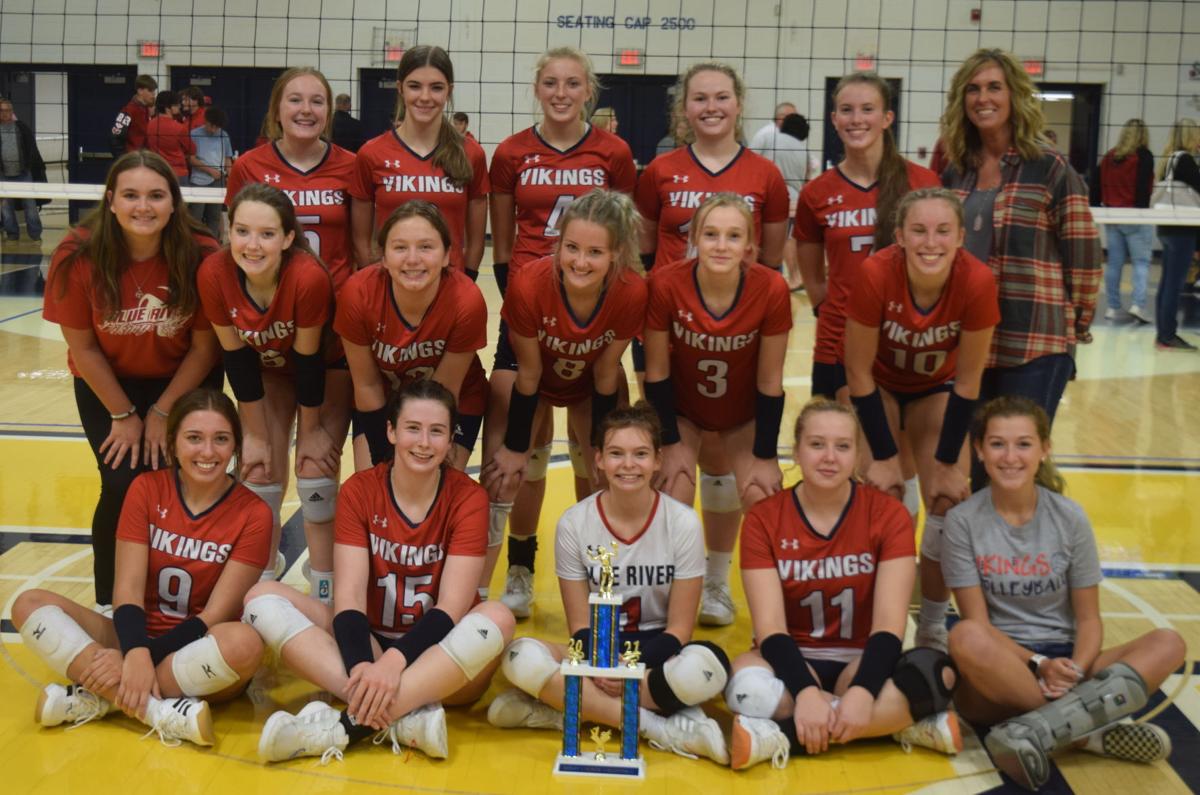 The Blue River Valley High School varsity volleyball team poses with the trophy and smiles after winning the championship of the Henry County Tournament Saturday night with a three-set 25-18, 25-21, 25-9 victory over Knightstown in Shenandoah High School’s Von Jameson Gymnasium. 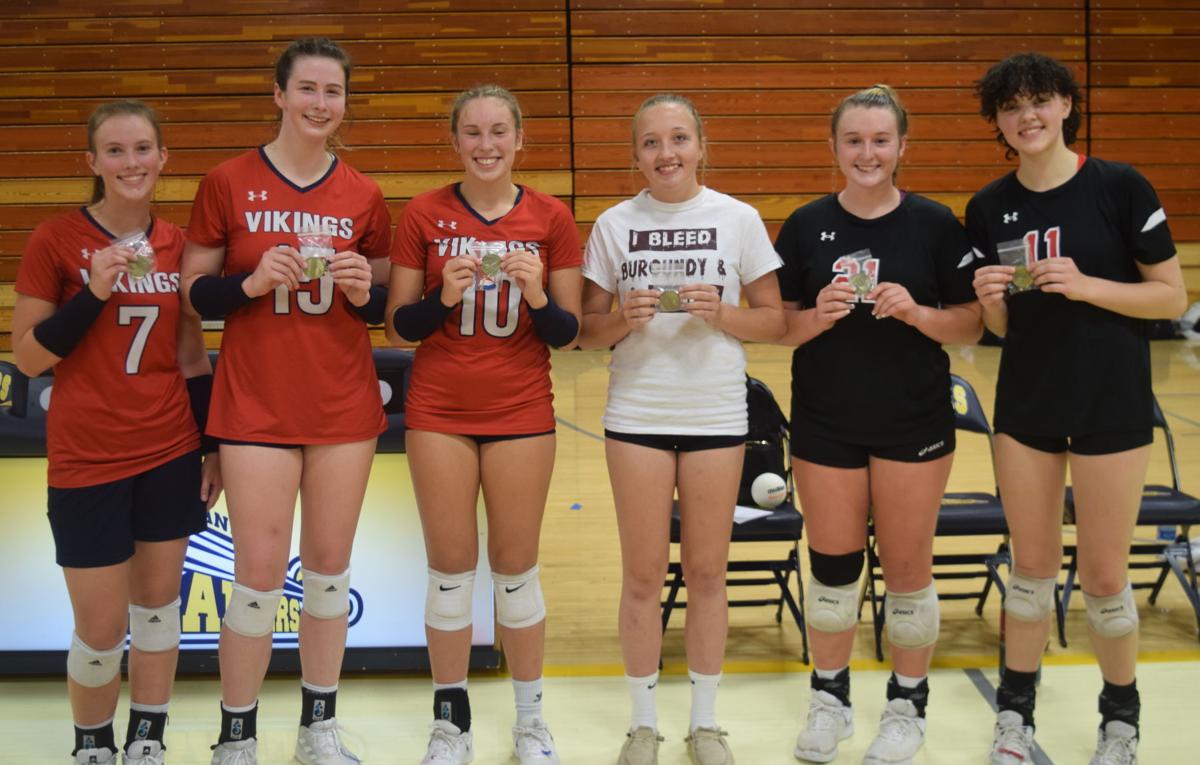 The Blue River Valley High School varsity volleyball team poses with the trophy and smiles after winning the championship of the Henry County Tournament Saturday night with a three-set 25-18, 25-21, 25-9 victory over Knightstown in Shenandoah High School’s Von Jameson Gymnasium.

“We’re excited that we repeated as county champions,” Blue River Valley Head Coach Sonja Thornburgh said after the match. “We realize that Knightstown might have been a little tired after going five sets to beat Tri, but we wanted to come out and play aggressively because we know they (Panthers) are a capable team. We’re starting to get our entire roster back, which we’ll need for the upcoming tournament.”

The Vikings got to the championship match when Shenandoah defaulted its semifinal match with Blue River, while the Panthers got there by rallying from a two-set deficit to outlast Tri in five sets in the other semifinal.

Knightstown had to be somewhat fatigued after needing 107 minutes to defeat the Titans Saturday evening, and there was just a 35-minute break between that semifinal and the championship match.

That fatigue showed up immediately as Blue River jumped out to a 7-1 advantage in the first set on an Ally Madden kill and service ace and five Panther hitting mistakes that were answered by only a Gwen Dyer kill.

Over the next several points, the Vikings gradually increased their lead to 14-6, capped by a pair of Madden terminations. Also during that segment of play, Blue River got a quartet of Maciah Driskill kills while Knightstown got a kill from Paige Personett.

The Panthers began hacking away at their deficit and eventually pulled to within three points at 20-17.

During that period of play, Knightstown got two kills and a service ace from freshman Emily Scott, two kills apiece from Personett and Brookelynn Snyder, and a Dyer tip, while the Vikings had a trio of Madden kills, another from Maciah Driskill, and a Trinity Driskill point.

However, the Panthers served the ball long and Blue River went on a 4-1 run with three more Madden terminations and a net violation on Knightstown to win set one after 21 minutes.

The Vikings jumped out to a 6-2 advantage in the second set after a tip and point from Avery Seale, the recent transfer from Muncie Central, and kills by Isabelle Perdue and Maciah Driskill.

But the Panthers didn’t let Blue River run away and hide, as they got back into the set and tied it at 8-8. During that stretch, Knightstown got a pair of Personett kills, a tip from Teagan Yoder, and a Breanna Ramsey service ace that were answered by just a Maciah Driskill kill.

During that sequence of play, the Panthers got two Personett kills, a kill from Snyder, and a Dyer block while the Vikings had kills from Madden and Maciah Driskill.

Two Dyer service aces and a kill apiece from Personett and Alicia Knapp enabled Knightstown to score four consecutive points for a 20-16 advantage, but it didn’t last long.

The Panther student section kept shouting “Overrated” when Madden, the area leader in kills by a wide margin, made a hitting mistake, and Madden revved up her game.

After a Knightstown net violation, Blue River got five straight points on a Kearsten Perdue service ace, two kills and a tip from Madden, and a Trinity Dubois tip for a 22-20 lead.

Personett got a termination to pull her team to within 22-21, but two more Madden kills and a hitting miscue by the Panthers gave the Vikings set two after 24 minutes.

Visibly gassed, Knightstown did jump out to a 2-1 advantage in the third set after a Snyder kill and Dyer block.

But Blue River tallied 11 of the next 12 points to take a commanding 12-3 lead. Madden began the rampage with another kill and a service ace, Maciah Driskill recorded a trio of kills, and Seale had a point and service ace. The Panthers’ only point during that stretch came on a Yoder kill.

Knightstown pulled to within 13-5 on a Personett kill, but another Personett termination was all the Panthers got during another stretch in which Blue River went on a 9-1 run for a 22-6 advantage that virtually sealed the deal.

During that segment of play, the Vikings got two Madden kills and a pair of Kaylyn Denney service aces, and Knightstown made five errors.

The Panthers scored three of the next four points on a pair of Blue River hitting mistakes and a Personett kill, sandwiched around a kill by the Vikings’ Sami Loveless, but terminations by Madden and Maciah Driskill gave Blue River set three after 17 minutes, the match three sets to none, and the championship.

“We were so fatigued and tired at the end,” Knightstown Head Coach Shanna Smucker remarked. “Our girls gave it their best shot, but it’s tough playing two competitive matches against good teams one right after the other with very little time in between.”

Named to the All-County Team after the championship match were Blue River’s Madden, Isabelle Perdue, and Trinity Driskill, Knightstown’s Personett and Dyer, and Tri’s Cayla Claar.