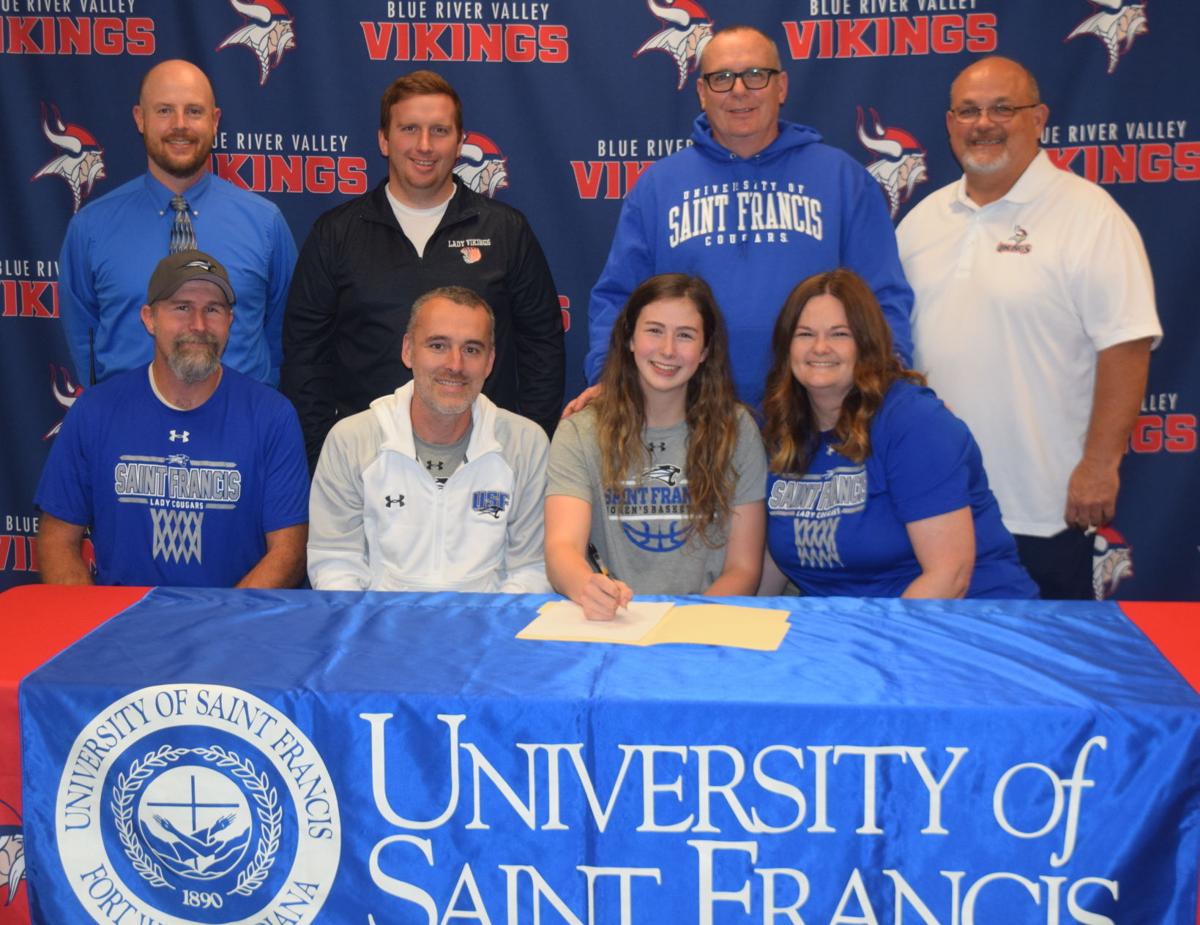 MOUNT SUMMIT – It almost was a foregone conclusion that Blue River Valley High School senior and three-sport athlete would sign with some college or university to compete in some sport (most likely basketball). The question was, “Where?”

The answer to that question came Monday afternoon in the school’s high school library when Madden inked a letter of intent to play women’s college basketball for the University of Saint Francis in Fort Wayne beginning in the 2022-23 season.

“It was a long journey, but I’m really happy with my choice,” Madden said. “Saint Francis had the type of basketball and academic program I was looking for, and I didn’t have much hesitation in accepting the offer. Another good thing is that I’ll be able to see my cousin, Eliza Madden, a lot more because she plays volleyball for USF.”

Madden did have the attention of other colleges.

“A couple of colleges reached out to me and one made a firm offer,” Madden remarked. “But I’m glad I’m going to Saint Francis because it’s close enough that my family and friends can come up and see me play.”

“I plan to study to become an RN (registered nurse),” Madden said. “Then I plan to go to work for two years to get my nurse practitioner’s license.”

Madden was asked if the USF coach had mentioned which position he wanted Madden to play.

“I think he recruited me as a center or power forward, “Madden replied, “most likely a center. But I’m willing to play anywhere he wants me to play.”

USF women’s basketball Head Coach Jason Ridge was present for Monday’s signing and had a few comments about his latest recruit.

“We’re really excited and feel we hit a home run by getting Ally to play for us,” Ridge remarked. “Not only are we getting a really good and skilled basketball player. We’re getting an excellent student and a person of great character. It’s the kind of player we’re looking for and she’ll fit right into our program.”

Ridge went on about why he was thrilled to get Madden.

“Ally has size, length, great hands, can shoot and rebound really well, and has a good mid-range jump shot,” Ridge said. “But I think one thing about her that people don’t talk a lot about is that she’s a really good defensive player. She’s smart and recognizes what other teams are doing, and is great on the help side. With the shot clock and rigor of college basketball, she’s able to run the floor really well and get up and down the court without getting tired.

The USF Cougars compete in the Crossroads League (conference) and are a member of the NAIA. USF won a NAIA national championship in women’s basketball in 2014.

“That’s the goal every season,” Ridge added. “Our women’s basketball team consistently has been ranked in the NAIA Top 25 the past seven or eight seasons, and the Crossroads League is ranked as the second-best conference in the NAIA. Adding Ally will help us maintain that level of success, and she hasn’t reached her ceiling yet. She’s going to get better and better.”

It’s probably more than a coincidence that the best years of Viking girls basketball this century have occurred with Madden’s high school arrival.

Blue River girls basketball Head Coach Terry Bales took the reins of the program during the 2017-18 season, the year before Madden arrived, and clearly had it steered in the right direction, compiling a winning 14-9 record.

But the Viking girls still had never won a basketball sectional under the IHSAA’s multi-class system, and didn’t do so in Bales’ first season at the helm, as Blue River lost to Tri 42-34 in its sectional opener.

Enter Ally Madden. Since Madden’s arrival in the 2018-19 season, the Viking girls haven’t lost a sectional game, winning three consecutive sectional titles, and have reached at least the Elite Eight all three years by winning their regional semifinal games.

Blue River went one better in the 2019-20 season, as it won its first girls basketball regional championship in school history and advanced to Class A’s Final Four, where it finally lost to Pioneer in the northern semi-state championship game in Logansport’s Berry Bowl.

Basketball is a team sport, of course, and Madden had some talented teammates around her, but folks would have to admit that Madden was a vital cog in that success.

In that semi-state championship game, it was obvious to everyone present that Pioneer’s primary focus was on shutting Madden down and limiting her touches. The Panthers did a good job of that, holding Madden to four points on very few shot attempts, but Madden still got a fair share of rebounds and blocks.

Madden was named to The Courier-Times All-Area First Team for girls basketball the first three years of her high school career, and was named to the Small School All-State Team by the ICGSA after last season.

Blue River graduated three seniors, including two starters, from the 2020-21 team, but most of the other players, including Madden and Maci Chamberlin (who also made the C-T All-Area First Team) return, so another good season appears to be in store for the Vikings.

“I think Saint Francis is a really good fit for Ally,” Blue River girls basketball Head Coach Terry Bales said. “She made a tremendous jump in her ability from her sophomore to junior seasons, and much of that was achieved by playing AAU ball against other really good players. Ally is not only a good basketball player and excellent student; she’s a great person. We’re looking to have another good season her senior year, and I’m looking forward to see how much better she’s going to get.”

What’s more, Madden probably could have signed with a college to compete in her other two sports, volleyball and track & field.

Madden is a four-year member of the Blue River varsity volleyball team that won sectional championships her freshman and sophomore seasons, and currently is the local area leader in kills by a wide margin.

In track & field, Madden runs the middle distances and competes in high jump, and has had good success in both.

Madden is looking forward to the collegiate experience, but wants to enjoy the rest of her senior year of high school first.

Madden was asked if she had any other comments for the readers of this story.

“I want to thank my parents and family for their love and support all these years,” Madden added, “and to thank the Blue River community for always having my back.”