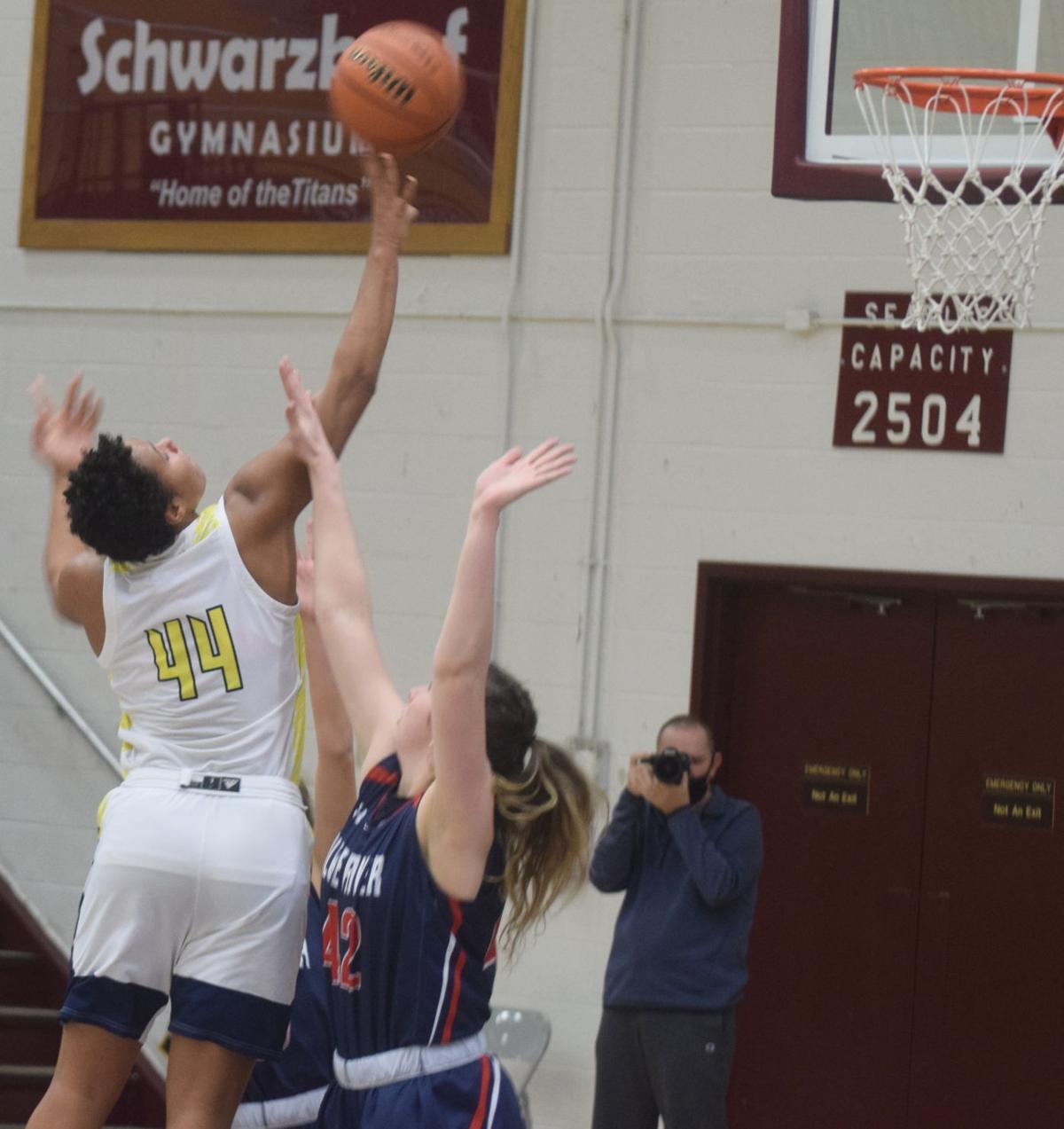 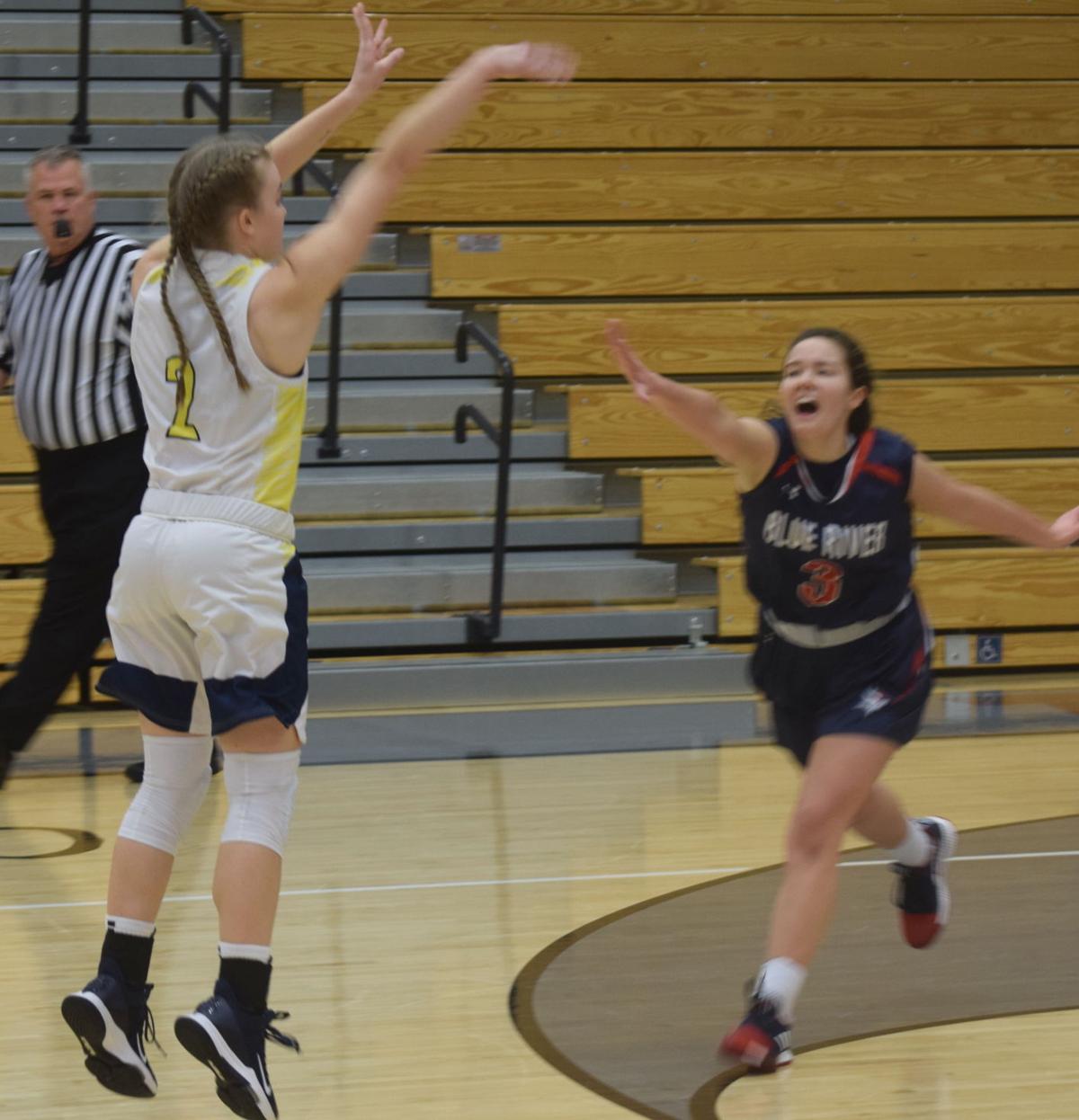 Shenandoah’s Kathryn Perry (2) launches a three-pointer as Blue River Valley’s Abby Thornburgh (3) rushes up in vain to stop it during Friday evening’s first opening-round game of the Henry County Girls Basketball Tournament at Tri. Thornburgh scored a team-high 15 points for the Vikings, but Perry tallied 11 points and had more help in the Raiders’ 52-33 victory.

Shenandoah’s Kathryn Perry (2) launches a three-pointer as Blue River Valley’s Abby Thornburgh (3) rushes up in vain to stop it during Friday evening’s first opening-round game of the Henry County Girls Basketball Tournament at Tri. Thornburgh scored a team-high 15 points for the Vikings, but Perry tallied 11 points and had more help in the Raiders’ 52-33 victory.

What a difference 36 days make!

Friday evening in the first game of the opening round of the Henry County Girls basketball Tournament on Tri’s Jeff Miller Court, the Raider defense shackled the Vikings, holding them to just 33 points as Shenandoah rolled to a 52-33 victory.

The Raiders won their ninth straight game since that loss to Blue River, all by double digits, to improve to 12-3 for the season while the Vikings slipped to a record of 13-2.

“Our focus in practice this week was on playing championship defense the entire game, not just for 30 minutes,” Shenandoah Head Coach Dameon Wyatt remarked afterward. “One problem in our three losses was our inability to finish games. We knew they (Vikings) had some girls who could light it up, but our girls stuck to our game plan, played it to almost perfection, and we won as a result.”

The Raiders certainly learned their lesson from the first contest between the two teams. Shenandoah got out on defense on Blue River’s perimeter shooters and bottled up the Vikings’ leading scorer, 6-1 Ally Madden, down low.

This is reflected in the parameter of field goal shooting, as Blue River could hit just 12-of-46 shots from the floor for 26.1 percent marksmanship. By contrast, the Raiders were 21-of-51 (41.2 percent) from the field.

What’s even more impressive is that Shenandoah played this swarming, pressure defense without fouling, as it was whistled for only six personal fouls in the entire 32 minutes.

As a result, the Vikings had only three free throw opportunities, hitting two.

On the other hand, the Raiders had 15 charity tosses in the game. They weren’t that adept at hitting them, just seven for 46.7 percent, but it was enough to get the job done on this night.

Even more, Shenandoah won the battle of the boards by as astounding 47-23 margin after getting out-rebounded 38-33 by the Vikings in the earlier meeting.

“You’re not going to win many games shooting 26 percent,” Blue River Head Coach Terry Bales said afterward. “Shenandoah out-performed us in every facet of the game, including rebounding, defending, and getting to loose balls, and deserved to win. They have a really nice team.”

The only Blue River player to score somewhat consistently was Abby Thornburgh, who buried five three-pointers for 15 of her team’s 33 points.

The first quarter was close. The Raiders jumped out to leads of 4-0 and 8-4 after a pair of baskets apiece from Kathryn Perry and Jenna Stewart, the latter at the 4:33 mark of the opening period.

Thornburgh hit a pair of treys and Madden scored all six of her points for Blue River in the first frame.

In the second quarter, Erikka Hill hit a pair of free throws and Perry a bucket to give Shenandoah the lead again at 14-12, and the Vikings called timeout.

After play resumed, Mallory Cross hit a three-pointer to give Blue River its final lead of the contest, 15-14, with 4:24 left in the period.

Then, led by another six points from Hall and four by Jenna Stewart, went on a 10-0 run to give the Raiders a 24-15 advantage with 10 seconds left in the first half.

Thornburgh hit a buzzer-beating three-pointer, and the Shenandoah lead was trimmed to 24-18 at intermission.

A Hill free throw was answered by another Thornburgh trey, pulling the Vikings to within 25-21 with 6:06 left in the third quarter.

Stewart hit another bucket and Rachel Soden a three-pointer to boost the Shenandoah lead up to 30-21 at the 4:41 mark of the period, and Blue River called timeout.

When play resumed, Perry and Blue River’s Maci Chamberlin exchanged successful shots from behind the arc, and the Raider lead stood at nine points, 33-24 with 3:38 left in the frame.

Hill sank two of four free throws and a basket, and Soden drained another trey as Shenandoah closed the period on a 7-0 run and led 40-24 after three.

Cross hit a bucket 40 seconds into the fourth quarter to pull Blue River back to within 40-26.

But then came the knockout punch. Hill scored eight points and Perry two in a 10-0 run to put the Raiders on top 50-26 with 3:59 remaining in the game, and the writing as on the wall.

In the last part of the final period, the Vikings got another Thornburgh three-pointer and four Chamberlin points to offset another Stewart basket to account for the final score.

Turnovers were almost a wash, as the Raiders had 14 to the Vikings’ 13.

Shenandoah had two players record double-doubles. Hill posted game-highs of 23 points and 18 rebounds, while hill scored 12 points and had 14 boards. Perry added 11 points and Soden six to account for all the Raider points in the game. Kayla Muterspaugh corralled four caroms.

“I knew I had to help down in the low post and score when I had a chance to,” Stewart noted after the game. “I’m gaining more confidence in my shooting with encouragement from my teammates. We’re playing really well as a team right now.”

In addition to the scoring contributions by Thornburgh and Madden, Chamberlin had seven points and Cross five for Blue River. Cross had seven rebounds and Madden four.

“Winning county was a goal, but not the ultimate goal, for our team,” Bales added. “We want to be playing our best basketball of the season when the IHSAA tournament starts.”