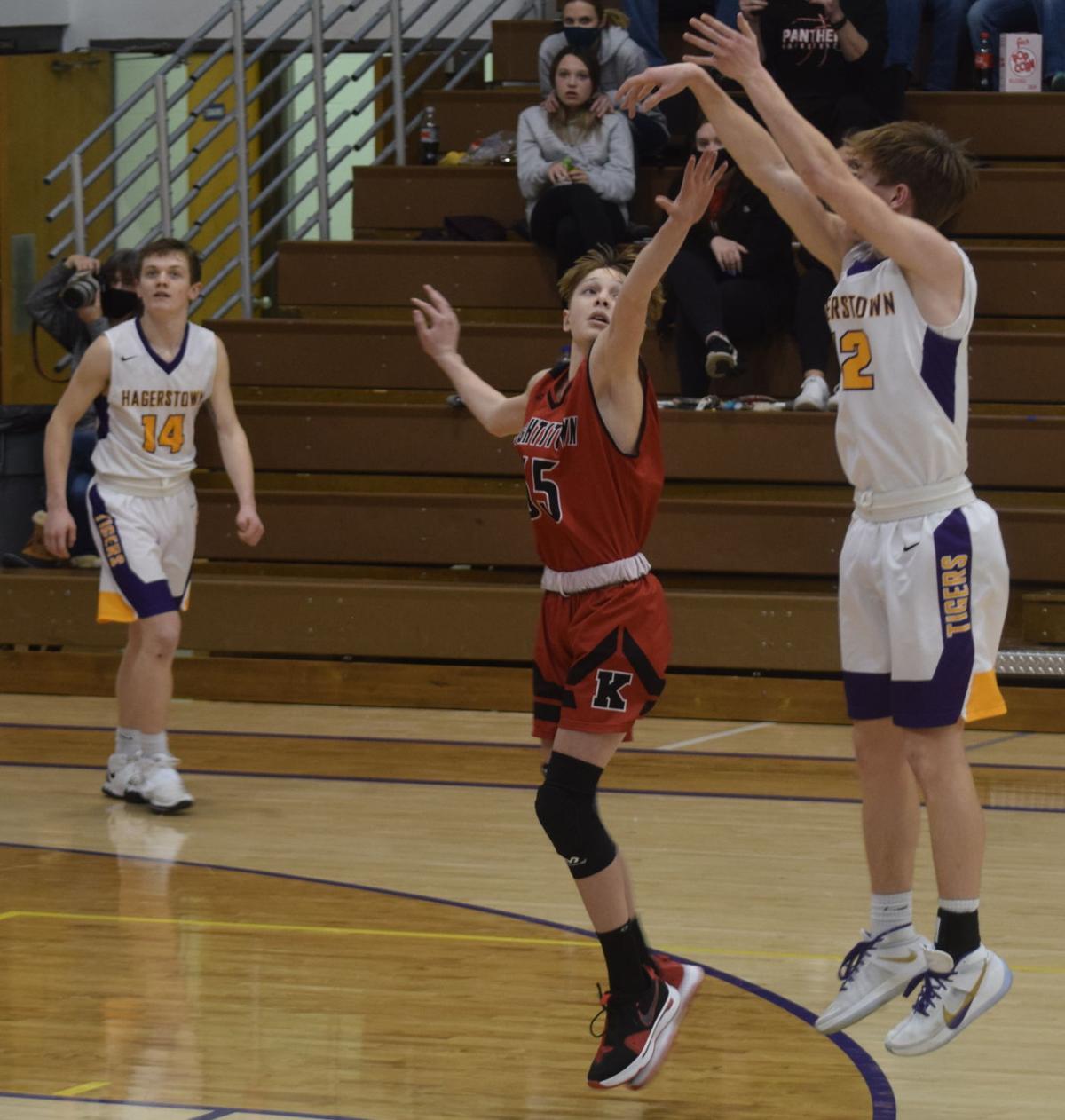 Hagerstown’s Gabe Warvel (12) launches a shot over the defense of visiting Knightstown’s Michael Roberson (35) as the host Tigers’ Mason Romack (14) watches during Saturday night’s TEC boys basketball game. Warvel had 17 points and Romack 22 for Hagerstown while Roberson tallied 11 points for the Panthers. The Tigers won in double overtime 74-68. 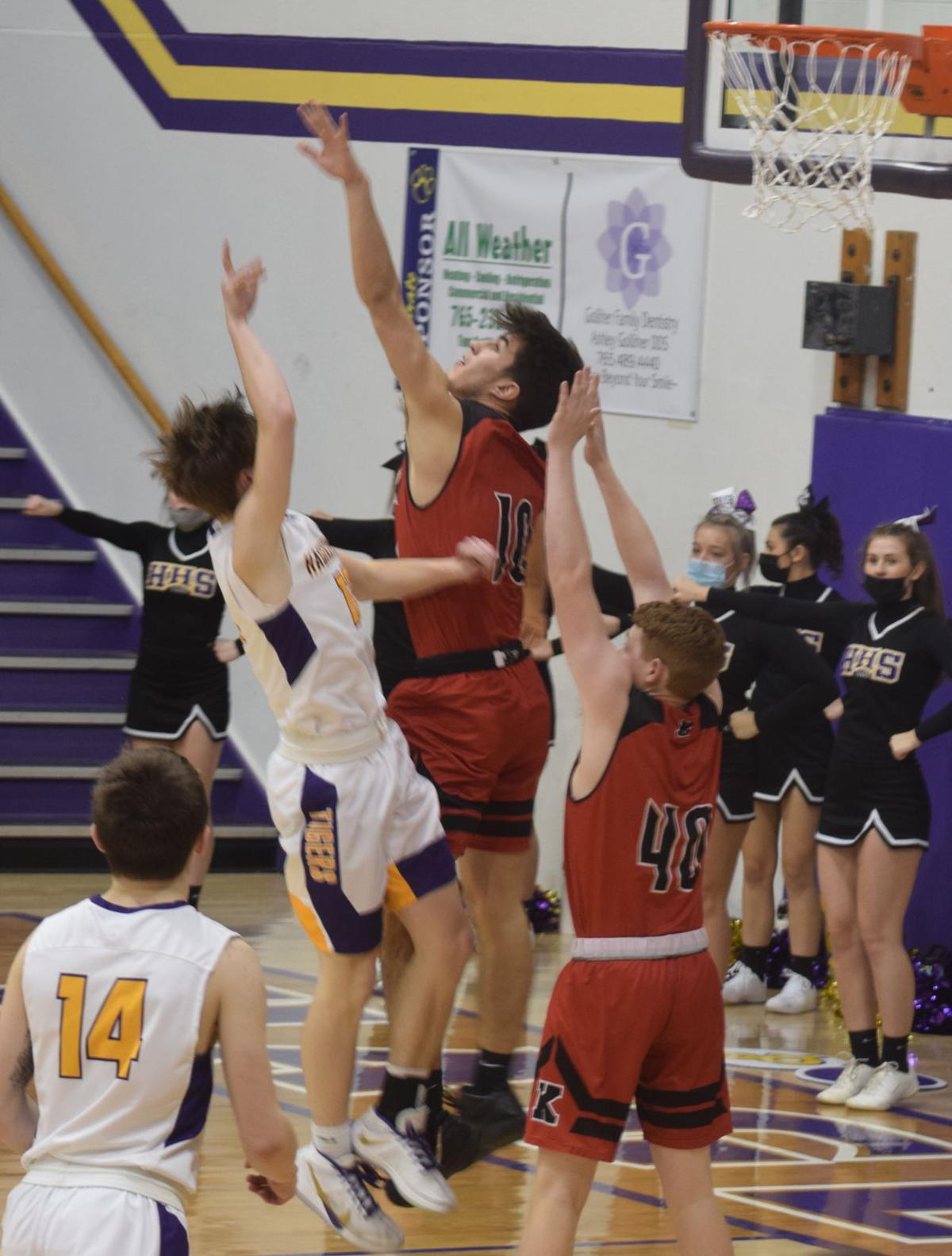 Visiting Knightstown’s Robert Porter (10) contests the shot of a Hagerstown player while the Panthers’ Connor Pyle (40) also defends and the host Tigers’ Mason Romack (14) watches during Saturday night’s TEC boys basketball game. Porter recorded a double-double of 16 points and 13 rebounds while Pyle had 15 points and nine boards, But Romack tallied a game-high 22 points as Hagerstown won in double overtime 74-68.

Hagerstown’s Gabe Warvel (12) launches a shot over the defense of visiting Knightstown’s Michael Roberson (35) as the host Tigers’ Mason Romack (14) watches during Saturday night’s TEC boys basketball game. Warvel had 17 points and Romack 22 for Hagerstown while Roberson tallied 11 points for the Panthers. The Tigers won in double overtime 74-68.

Visiting Knightstown’s Robert Porter (10) contests the shot of a Hagerstown player while the Panthers’ Connor Pyle (40) also defends and the host Tigers’ Mason Romack (14) watches during Saturday night’s TEC boys basketball game. Porter recorded a double-double of 16 points and 13 rebounds while Pyle had 15 points and nine boards, But Romack tallied a game-high 22 points as Hagerstown won in double overtime 74-68.

HAGERSTOWN - The end result of Saturday night's Tri-Eastern Conference boys basketball game between Knightstown and host Hagerstown was going to be a first for one of the two teams.

It took 40 minutes to decide the outcome, but in the end it was Hagerstown who accomplished its objective with a thrilling 74-68 double-overtime win over Knightstown in Robert E. Clark Gymnasium.

The Tigers improved to 3-4 in the TEC and 4-16 overall, while the Panthers ended their conference schedule with a 0-8 record and slipped to 0-17 for the season.

"I told our guys that Knightstown would come out really ready to play tonight and we would have to match their intensity in order to win," Hagerstown Head Coach Chad Romack said afterward. "They made us earn this victory, and I feel for their team. I told their coach to hang in there because I've been in the same situation before."

Truth be told, Knightstown would have won this game had it been more accurate from the free throw line. But the Panthers buried just 16-of-31 (51.6 percent) of their charity tosses.

Hagerstown wan't much better from the foul line in this big-cat fight, but sank 10-of-18 (55.6 percent) of its free throws, which proved to be enough for the victory.

"This one stings," Knightstown Head Coach Tanner Hedrick remarked after the game. "We played well enough to win and had a victory in our grasp. But to their (Tigers) credit, they hit some shots at key times to extend the game, and we just didn't get it done. A shot here or a free throw there might have gotten us the win."

Neither team scored for the first two-and-a-half minutes of the game. Knightstown then got baskets from Connor Pyle and Mason Fields for a 4-0 advantage with 5:04 remaining in the first quarter.

The Tigers finally removed their goose egg from the scoreboard on a Kadence Roman three-pointer at the 4:24 mark of the opening period to pull two within 4-3.

The visitors' Owen Newkirk hit a bucket and Pyle a charity toss to put the Panthers up 7-3, but Hagerstown's Gabe Warvel and Dominic Anderson tallied baskets for a 7-7 tie with 29 seconds left in the frame.

A three-pointer by Knightstown's Robert Porter a tick ahead of the buzzer gave the visitors a 10-7 advantage after one.

The lead changed hands five times in the second quarter. After a 2:09 stretch in the middle of the period in which no one scored, the Panthers' Aaron Reagan gave his team their final lead of the first half, 15-14, with a basket at the 2:49 mark.

The Tigers then went on a 10-2 run to close out the second quarter for a 24-17 advantage at halftime.

Hagerstown got nine points from Mason Romack and six more from Warvel in that second quarter.

Both teams were dismal from the charity stripe, 1-of-5 for the Panthers and 1-of-4 for the hosts.

Both teams picked it up quite a bit offensively in the third quarter, as both hit .500 or better from the floor in the period.

Knightstown shot 8-of-15 from the field in that third quarter and scored 21 points. The Panthers were led by Reagan's 10 points and two huge three-pointers (six points) from freshman Michael Roberson.

The Tigers shot 7-of-14 from the floor, scored 14 points, and were led by Warvel's six points and four from freshman Cole Tracy.

A Roberson trey 65 seconds into the fourth quarter gave the visitors a 41-38 advantage and their first lead since the second quarter.

Romack buried a shot from behind the arc 19 seconds later (at the 6:36 mark) to tie things up again at 41-all.

Fields hit the first of two free throws and then a three-pointer to give Knightstown a 45-41 lead with 4:32 remaining, and a little over three minutes later Pyle hit a bucket to give the Panthers a 47-44 advantage with 1:18 left in the contest.

But Romack notched a trey with 39.1 seconds left in the contest for a 47-47 tie. No one scored again the rest of regulation, and the game went to the first overtime period.

Nothing was settled in that initial four-minute extra session as both teams went at things fast-paced and scored 12 points apiece.

Roman gave Hagerstown a 50-47 advantage on a traditional three-point play 38 seconds into the first overtime, but the Panthers went on an 11-4 run to take a 58-54 lead with just 32.9 seconds remaining after a Newkirk charity toss.

Romack came to the rescue again by draining his fifth three-pointer of the game to pull the hosts back within a point, 58-57, with 24.6 seconds left.

Porter was fouled shortly thereafter and hit the second of two free throws for a 59-57 Knightstown lead. Anderson hit a bucket with seven seconds left in OT to deadlock things again at 59-all, and the game went into a second extra session.

In the second overtime, the Tigers tallied seven of the first eight points scored for a 66-60 advantage, but Porter converted a traditional three-point play and Pyle hit a basket to trim the Hagerstown lead to 66-65 with 1:38 remaining.

But the Tigers scored six straight points, capped by a Warvel bucket with 29 seconds left, for a 72-65 lead for the hosts that more or less sealed the deal.

With a combined total of 80 missed shots in the game, there were a lot of rebounds to snare, and Hagerstown won the battle of the boards by a narrow 44-40 margin. The Tigers turned the ball over 13 times in the contest compared to 18 for the Panthers.

Both teams produced their highest point totals of the season and both had four players score in double digits.

"Having four players in double figures is evidence we have guys who can score," Coach Romack added. "Carter Jenkins scored only three points, but he was big on the defensive end and got several rebounds for us."

For the Panthers, Porter had a double-double of 16 points and a game-high 13 rebounds, Pyle had 15 points and nine boards, Reagan 13 points and six rebounds, Roberson 11 points, Fields nine points, and Newkirk four points and seven boards.

"We're going to press on," Hedrick added. "Our JV had a big win tonight and we're still playing with a lot of younger guys on the varsity. We know things are going to turn our way at some point, and we hope it starts on Monday with a Southwestern (Shelby) team who's playing well right now."

Tonight, Hagerstown plays at Tri while Knightstown travels to Frankton.