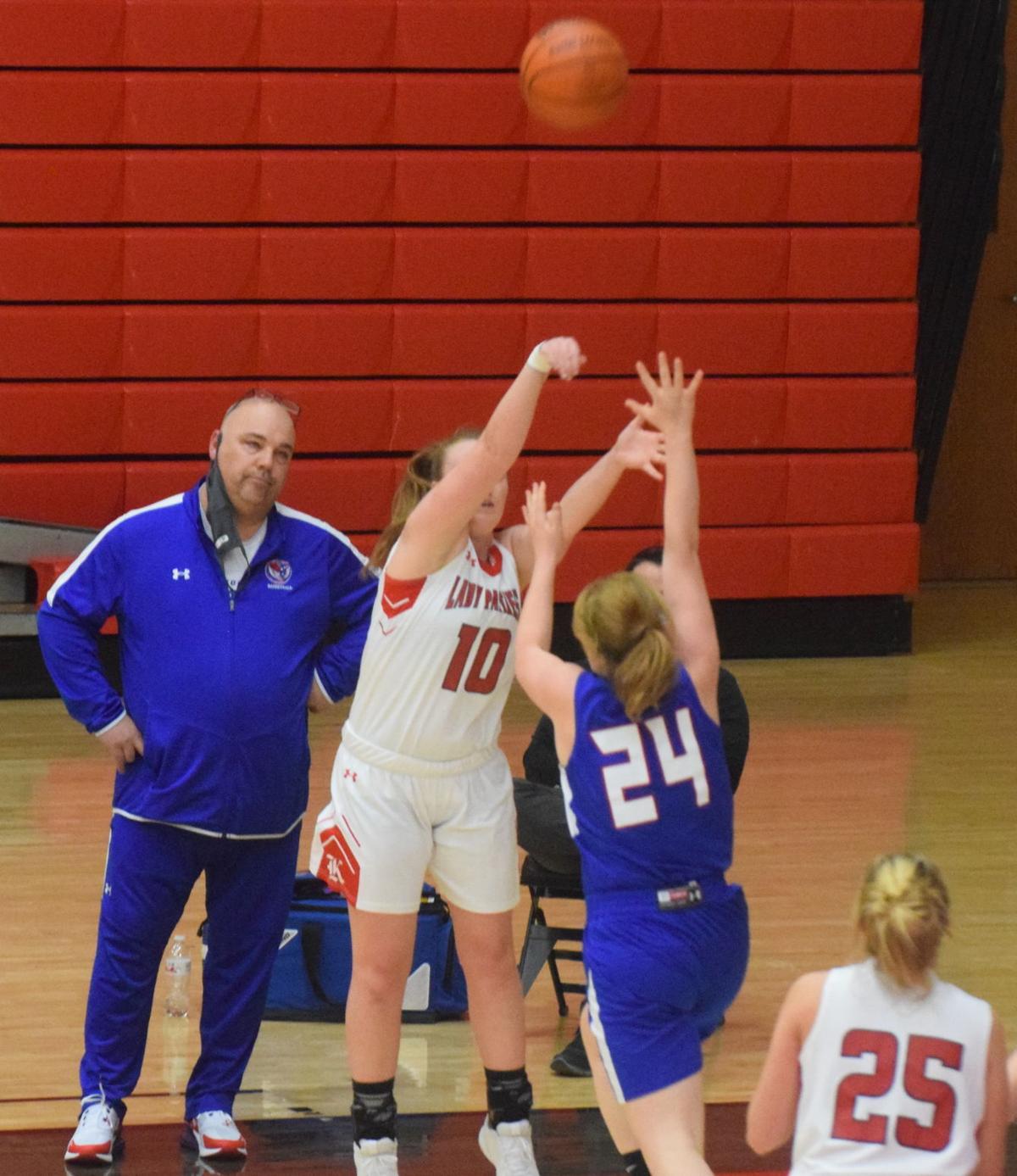 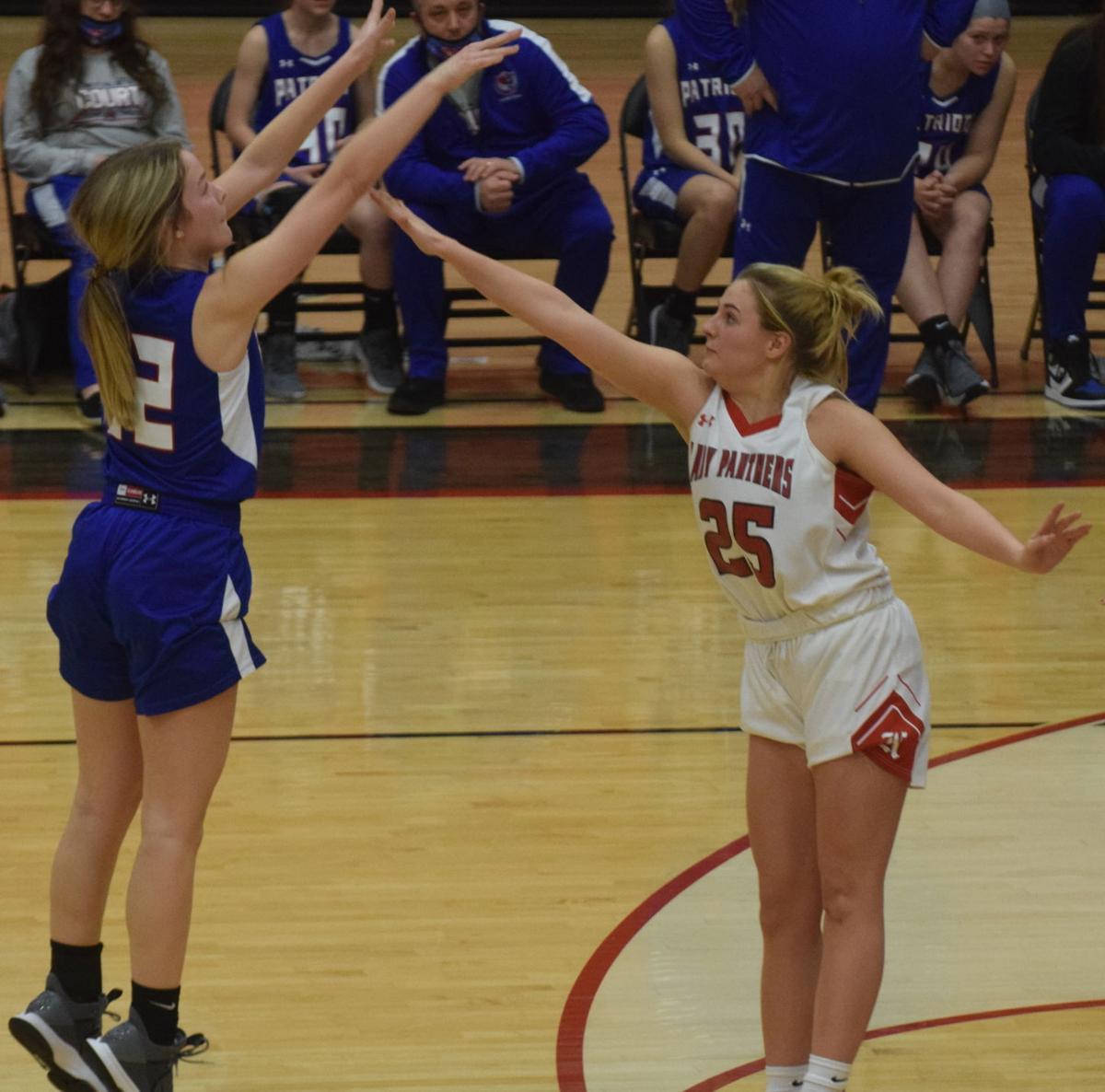 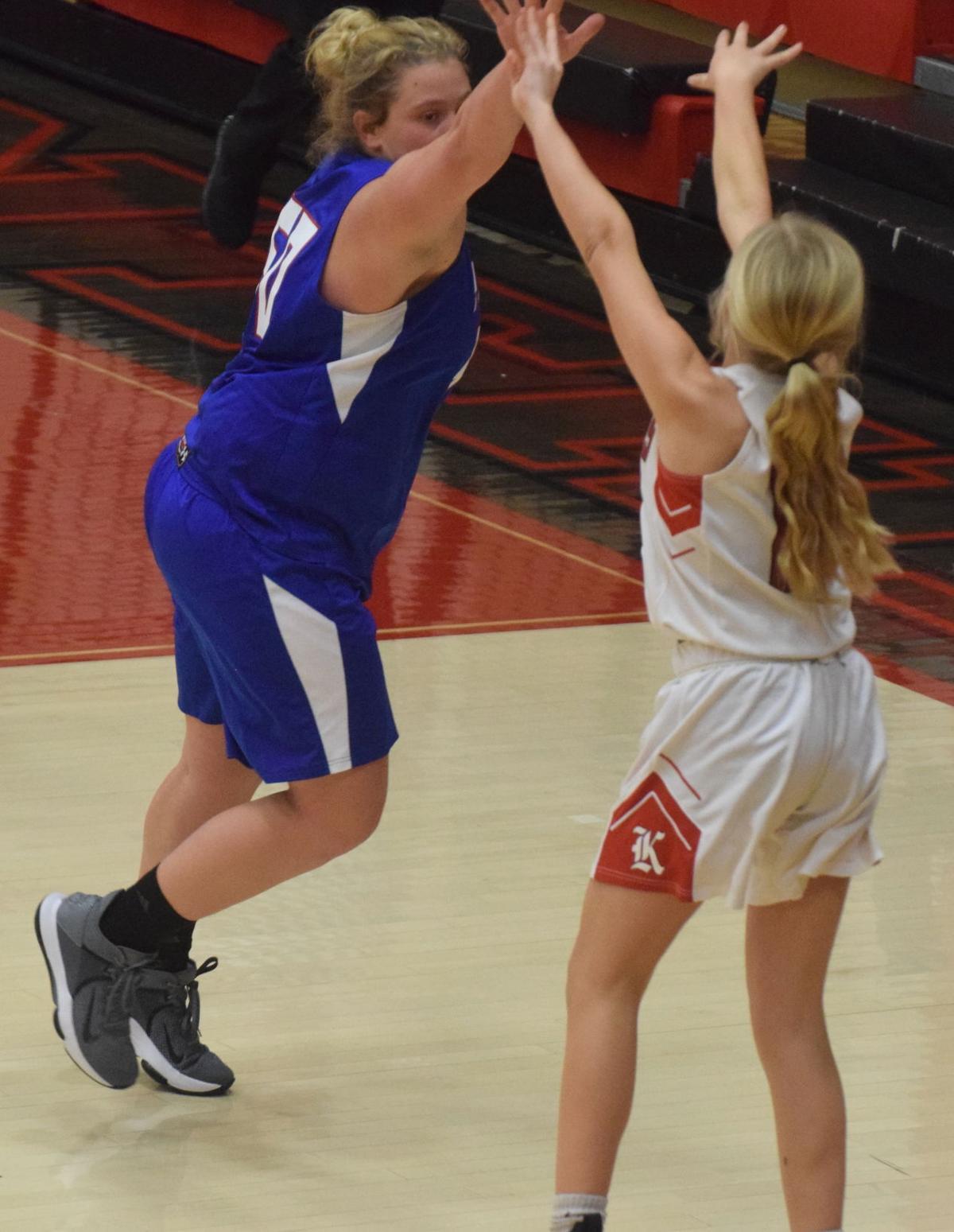 Knightstown 5-0 freshman Jalyn Kopp (13) attempts a three-pointer against the defense of 5-10 sophomore Shelby Hill from Union County. Kopp buried two shots from behind the arc for six points and grabbed five rebounds.

Knightstown 5-0 freshman Jalyn Kopp (13) attempts a three-pointer against the defense of 5-10 sophomore Shelby Hill from Union County. Kopp buried two shots from behind the arc for six points and grabbed five rebounds.

Although the Panthers improved quite a bit over their performance in the Henry County Tournament two weeks ago, it still wasn't enough to defeat the Patriots, who took a 59-30 victory with them back to Liberty.

Union County improved to 2-3 in the TEC and 14-5 overall, while Knightstown's records dipped to 0-6 in the conference and 2-15 for the season.

"We've made definite improvement over the past two weeks," Knightstown Head Coach Darren Kessler remarked afterward. "I think our win last weekend over Wes-Del inspired our girls and gave them some confidence. Our effort was there tonight, and we just need to keep getting better as a team."

Three aspects of the game hurt Knightstown in this contest, two of which have haunted them almost all season.

The Panthers turned the ball over 26 times compared to just 11 for Union County, and Knightstown shot just 11-of-43 (25.6 percent) from the field. The Patriots weren't exactly scorching the nets, either, but their 21-for-60 (35 percent) firing from the floor was better.

The other thorn in the side of the Panthers was the three-point shooting performance of Union County junior Lauren Alldredge, who sank seven shots from behind the arc to set a new school record for three-pointers in a single game by a Patriot girl.

To their credit, the Panther girls played hard the whole game and battled their taller foe to almost a standstill on the boards. Union County ended up with 36 rebounds in the contest, one carom more than Knightstown's 35.

"We knew they (Patriots) outsized us," Kessler said. "So one big focus in practice was on rebounding and getting good position under the basket. To come to within one rebound of them is a big positive for our girls."

One thing the Panthers did not do Thursday evening was get off to a good start. The Patriots got two three-pointers from Alldredge, a trey and deuce from Madison Gray, and a basket from freshman Bailey Mathews to zoom out to a 13-0 lead with three minutes left in the first quarter, prompting a Knightstown timeout.

After play resumed, the Panthers got a trey from Rena' Witham at the 2:41 mark of the period and two Brachelle Wisner charity tosses on separate trips to the line, sandwiched around another Gray bucket, and the visitors held a 15-5 advantage after one.

Union County's Shelby Hill hit a basket and Alldredge another three-pointer in the opening minute of the second quarter to boost the Patriot lead to 20-5.

But for the final 7:05 of the period, Knightstown played pretty evenly with its guests and actually outscored them 14-12 to pull to within 32-19 at halftime.

Four Panther players tallied points in the second frame. Freshman Jalyn Kopp, who was active all over the floor all game, buried a pair of shots from behind the arc for six points, Wisner hit two free throws and a basket for four points, and Witham and freshman Hannah Mefford sank buckets for two points apiece.

On the other side, the Patriots got their other 12 points in the second stanza on a pair of Alldredge treys, a Kaleah Louden basket, and two free throws each from Gray and Hill.

As in the first quarter, Knightstown did not get off to a good start in the third quarter, either. All the Panthers got in the first 3:37 of the third period was a basket by freshman Allie Smith at the 6:37 mark.

Meanwhile, Union County opened the second half on a 12-2 run, getting a pair of charity tosses from Hill and a bucket and three-pointer apiece from both Alldredge and Gray to boost its advantage to 44-21 with 4:46 remaining in the third frame.

"Madison Gray is one of the best players we'll face this season," Kessler noted, "and No. 12 (Alldredge) is one of the best shooters we've faced. Many of our girls are freshmen and still are learning how to play basketball at the varsity level."

Smith and Witham hit baskets for the hosts, sandwiched around a Mathews bucket, to trim the Panther deficit to 46-25 with 2:38 left in the quarter.

But the Patriots ended the period on a 6-0 run, getting baskets from Genny Antrim and Gray, plus a pair of Tori Russell free throws, for a 52-25 advantage after three.

No one scored for the first 2:39 of the fourth quarter until Antrim hit a bucket at the 5:21 mark. Wisner scored on an assist from Witham 44 seconds later to pull the hosts to within 54-27.

Although both teams began clearing their benches, Alldredge was kept in the game until she could drain her seventh three-pointer of the contest at the 4:05 mark, when play was stopped temporarily to honor the feat.

Ahead 57-27 at that point, all the visitors got the rest of the way was an Antrim basket, while the Panthers answered with a bucket from Taylor Reagan and a Witham charity toss to close out the scoring for the evening.

Alldredge led Union County in scoring with 23 points, followed by Gray 16, Antrim and Hill six apiece, Mathews four, and Russell and Louden two each. Gray had nine rebounds, Hill seven, and Antrim and Alldredge four each.

For Knightstown, Witham and Wisner led the way with eight points apiece, followed by Kopp six, Smith four, and Reagan and Mefford two each. Wisner had a game-high 10 rebounds, followed by Witham with eight and Kopp five.

"We have a good chance to get two more wins before the tournament starts," Kessler added. "We'll see what our draw is Sunday and hope we get a good one. If we see Union County again in the sectional, we'll know better how to prepare for them."