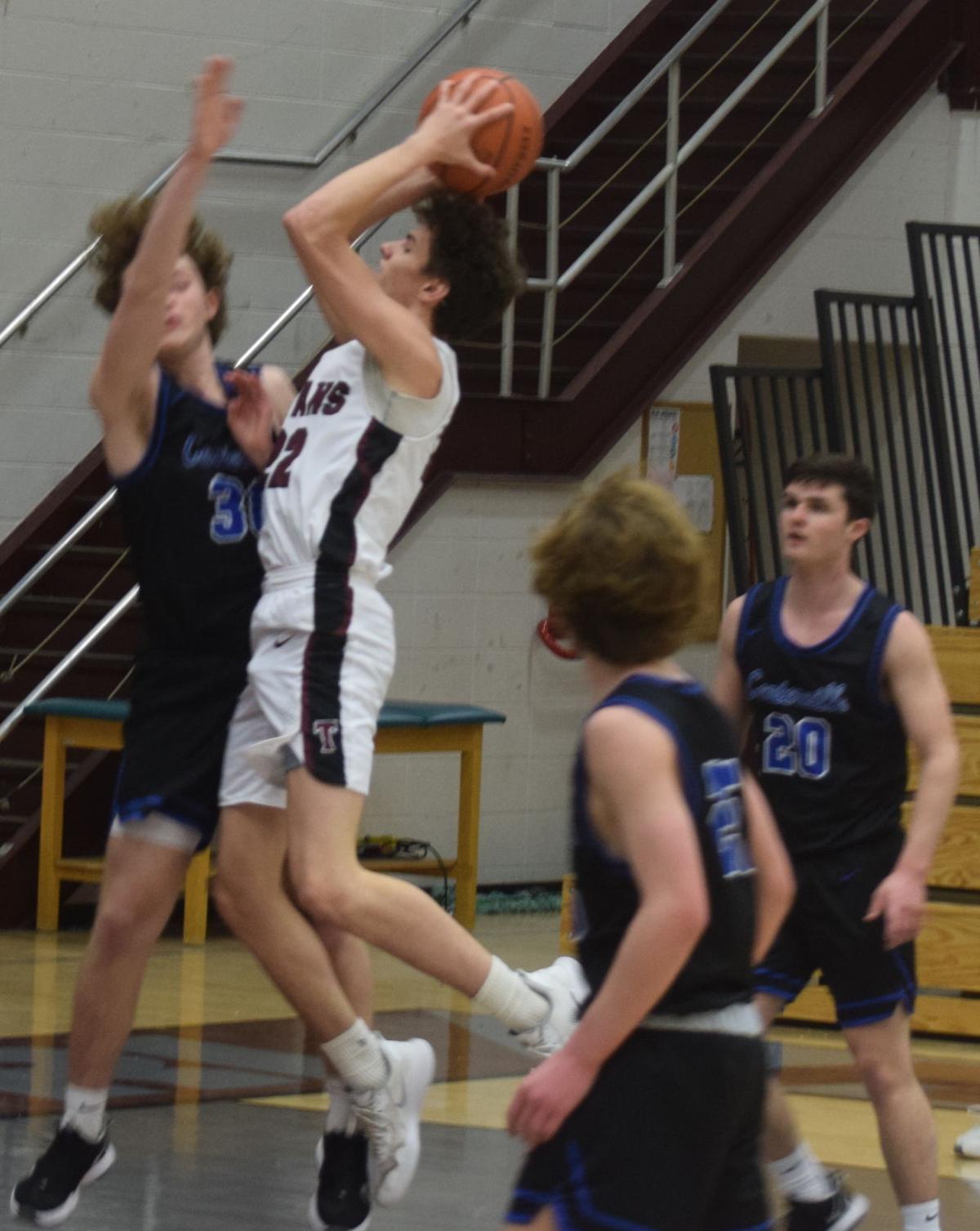 Tri’s Daniel Davis (22) attempts a shot while being bumped by visiting Centerville’s Avery McCoy (30) as the Bulldogs’ Jake Erbse (25) and Ryan Dickenson (20) watch during Friday night’s TEC boys basketball game. Davis came off the bench to score 11 points and grab eight rebounds for the host Titans, but Centerville won 56-50. 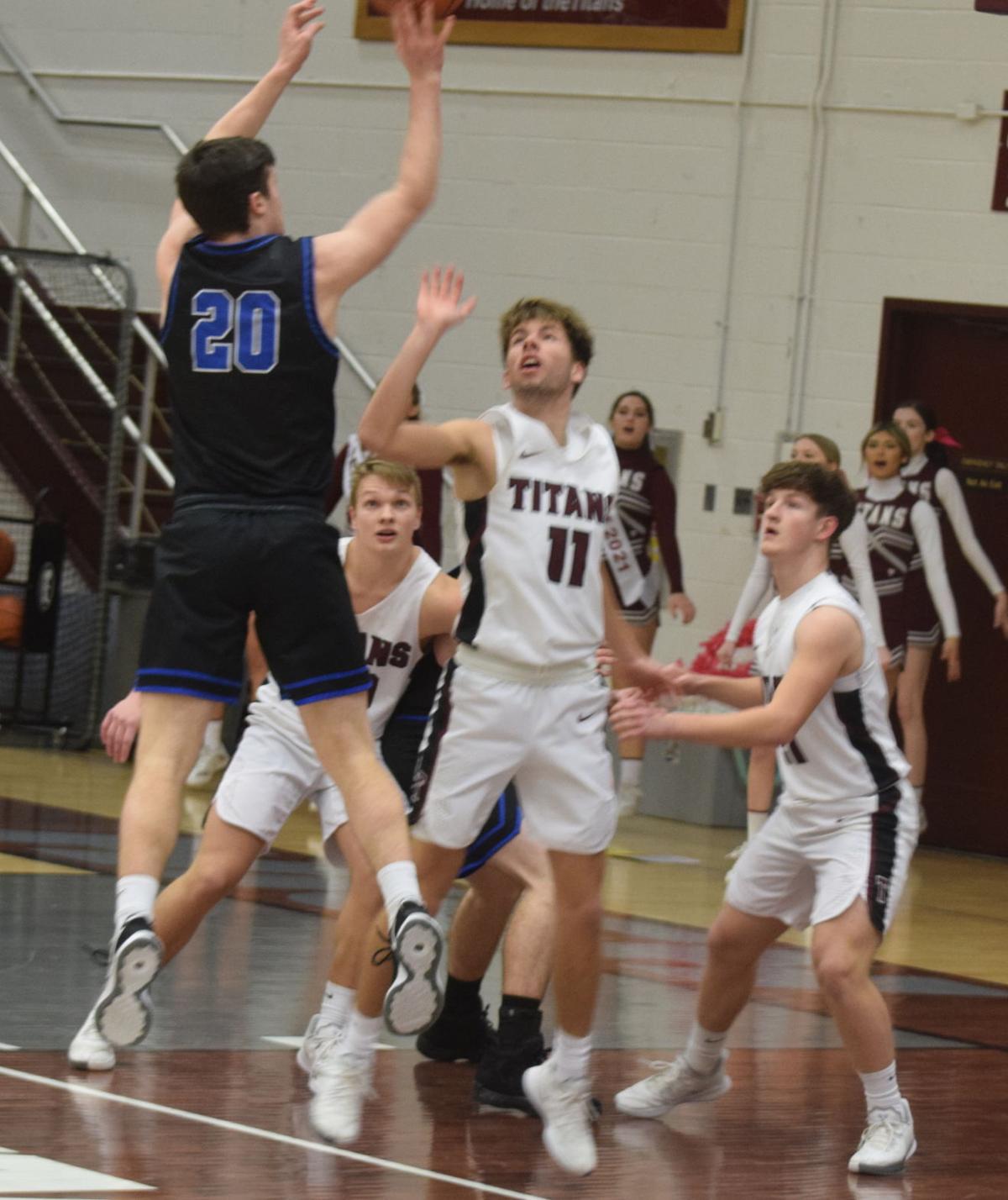 Tri’s Daniel Davis (22) attempts a shot while being bumped by visiting Centerville’s Avery McCoy (30) as the Bulldogs’ Jake Erbse (25) and Ryan Dickenson (20) watch during Friday night’s TEC boys basketball game. Davis came off the bench to score 11 points and grab eight rebounds for the host Titans, but Centerville won 56-50.

LEWISVILLE – The Tri High School boys basketball team was hoping to put itself above visiting Centerville in the Tri-Eastern Conference standings in Friday night’s game on Jeff Miller Court.

And the Titans might have done that had they not had a relatively poor second quarter offensively which turned a one-point lead at the end of the first period into an 11-point halftime hole.

As a result, Tri had to play catch-up in the second half and almost pulled even. But the Bulldogs ended up winning the contest 56-50.

Centerville improved to 3-3 in the TEC and 6-12 for the season, while the Titans slipped to records of 2-5 in the conference and 4-14 overall.

"We just need to be able to put the ball in the basket better," Tri Head Coach Scott McIntosh said afterward. "We missed some easy shots throughout the game, and we missed some free throws that could have helped us had we hit them."

It was Senior Night for the Tri boys basketball team and the Titan cheerleaders. Seniors Kaylee Riggs and Kennedy Peggs from the cheer squad plus players Jonah Huffman, Luke Hill, Holden Thomas, Evan Murphy, and Parker Engle were honored before the varsity game.

"We weren't able to get into the gym to practice all week because of the weather until today even though our guys wanted to," McIntosh remarked, "and then we were just able to shoot around a bit today. It hurts when you can't get into your normal routine."

The first quarter was about as tight as they come, and the contest was tied twice at 5-5 and 8-8 before Tri managed to grab a three-point advantage at 14-11 with 35 seconds remaining in the opening period.

The Bulldogs hit the final basket of the frame, trimming the Titan lead to 14-13 after one.

The scoring was well-balanced for both teams in the opening stanza, as six players scored for Tri and five for Centerville.

The Titans struggled mightily to get the ball to drop through the hoop in the second quarter, as they got only a Caelin Huffman free throw (at the 6:52 mark) during the first six minutes of the period.

Tri’s Hill finally hit a three-pointer for the host’s only bucket in the frame with 1:58 left in the first half to trim the visitors’ advantage to 26-18.

Centerville than got a Mason Cunningham basket and Leckliter trey, sandwiched around two charity tosses from Hill, and the Bulldogs had that 11-point lead, 31-20, at intermission.

Centerville shot 8-of-11 from the field in the second period compared to just 1-of-11 for the Titans.

Tri got back into the game rather quickly when the second half opened, as Jonah Huffman hit a pair of free throws and Murphy a three-pointer to pull the Titans back to within 31-25 with 6:09 left in the third quarter.

Leckliter buried another shot from behind the arc to boost the visitors’ lead back to nine points at 34-25, but Tri wouldn’t back down and kept pecking away at the deficit.

Mason Wilson hit a basket and Murphy another three-pointer, and the hosts were back to within four points at 34-30 with 3:25 remaining in the period. Centerville called timeout six seconds later.

When play resumed, the Bulldogs’ Ryan Dickenson drained a trey and Avery McCoy hit a bucket, sandwiched around two free throws from Tri’s Daniel Davis on two separate trips to the foul stripe, and Centerville led 39-32 after three.

No one scored in the opening minute of the fourth quarter, and then Davis made a basket and Jonah Huffman sank a trey within a short period of time, pulling the Titans to within two points at 39-37 at the 6:24 mark of the period.

The Bulldogs didn’t score until Cunningham hit the second of two charity tosses with 5:37 left in the quarter, but Davis canned two free throws 21 seconds later to trim the visitors’ lead to one point, 40-39.

But the hosts could get no closer. Dickenson buried two buckets, sandwiched around another one from teammate Keegen Schlotterbeck, for a 6-0 Bulldog run and 46-39 Centerville advantage with 2:45 left in the game.

Jonah Huffman sank another three-pointer 11 seconds later to pull the hosts back to within four at 46-42, but Leckliter drained his fourth trey of the contest and added a charity toss 31 seconds later for a 50-42 Bulldog lead with 1:49 left.

The Titans kept plugging away, though, and two Wilson free throws plus Jonah Huffman’s fourth three-pointer of the night were answered by only an Austin Farlow charity toss, and Tri trailed by just four, 51-47, with 1:16 remaining in the game.

But the visitors were able to can five free throws in the remaining time to more than offset three points scored by the Titans, and Centerville went back to Wayne County with the six-point victory.

"I thought our guys played hard," McIntosh added. "Luke Hill did a tremendous job defensively on their best player, and I thought Daniel Davis played great coming off the bench. We'll just go back to work and try to get better."

Tri won the battle of the boards 33-28. Both teams hit eight shots from behind the arc, and both committed 11 turnovers in the contest.

Tri shot better from the free throw line than did Centerville, 14-of-20 (70 percent) compared to the visitors’ 8-of-16 (50 percent), but not enough to get the victory.