Players, coaches, and managers of the Class 2A No. 2 Shenandoah High School boys basketball team smile while holding the trophy in front of the bucket after defeating Blue River Valley 43-31 to win the championship of the Henry County Boys Basketball Tournament Saturday night at Tri. 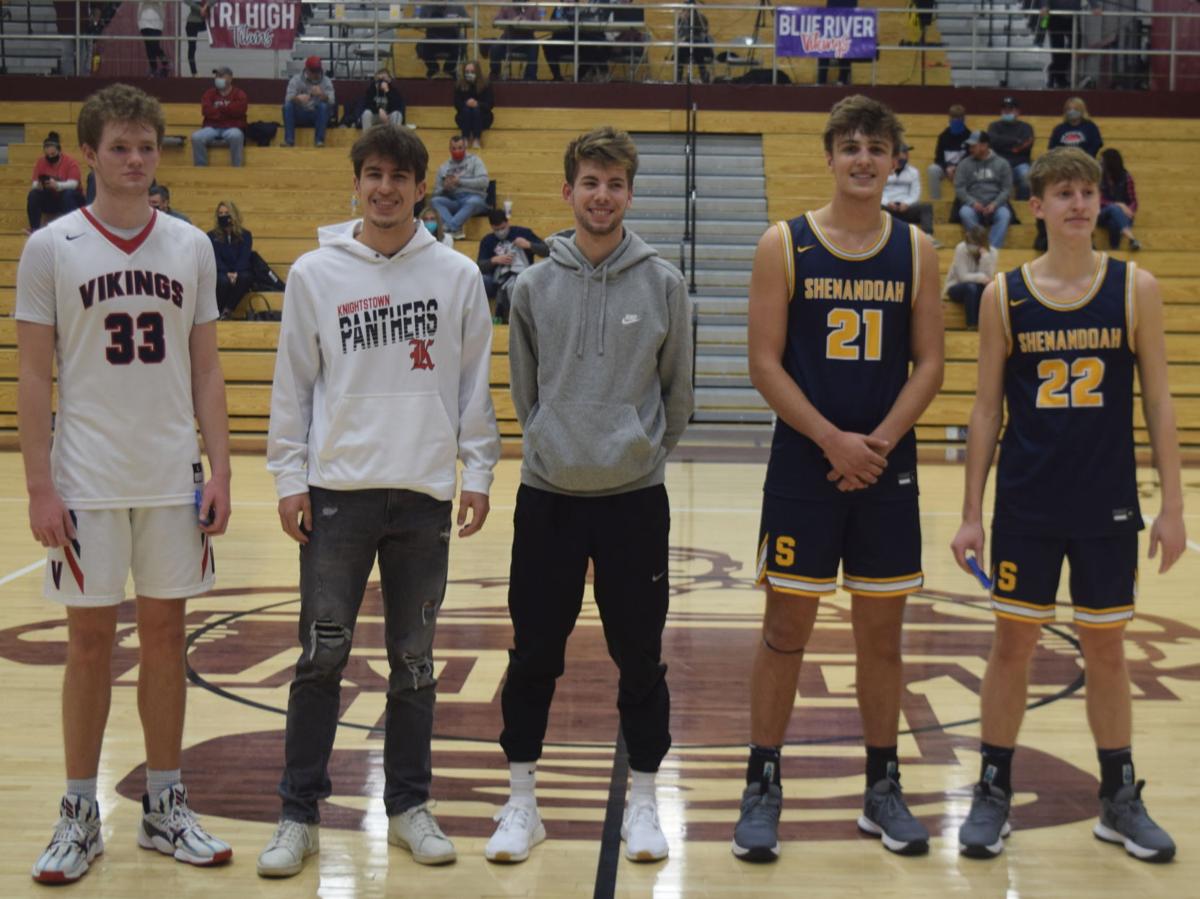 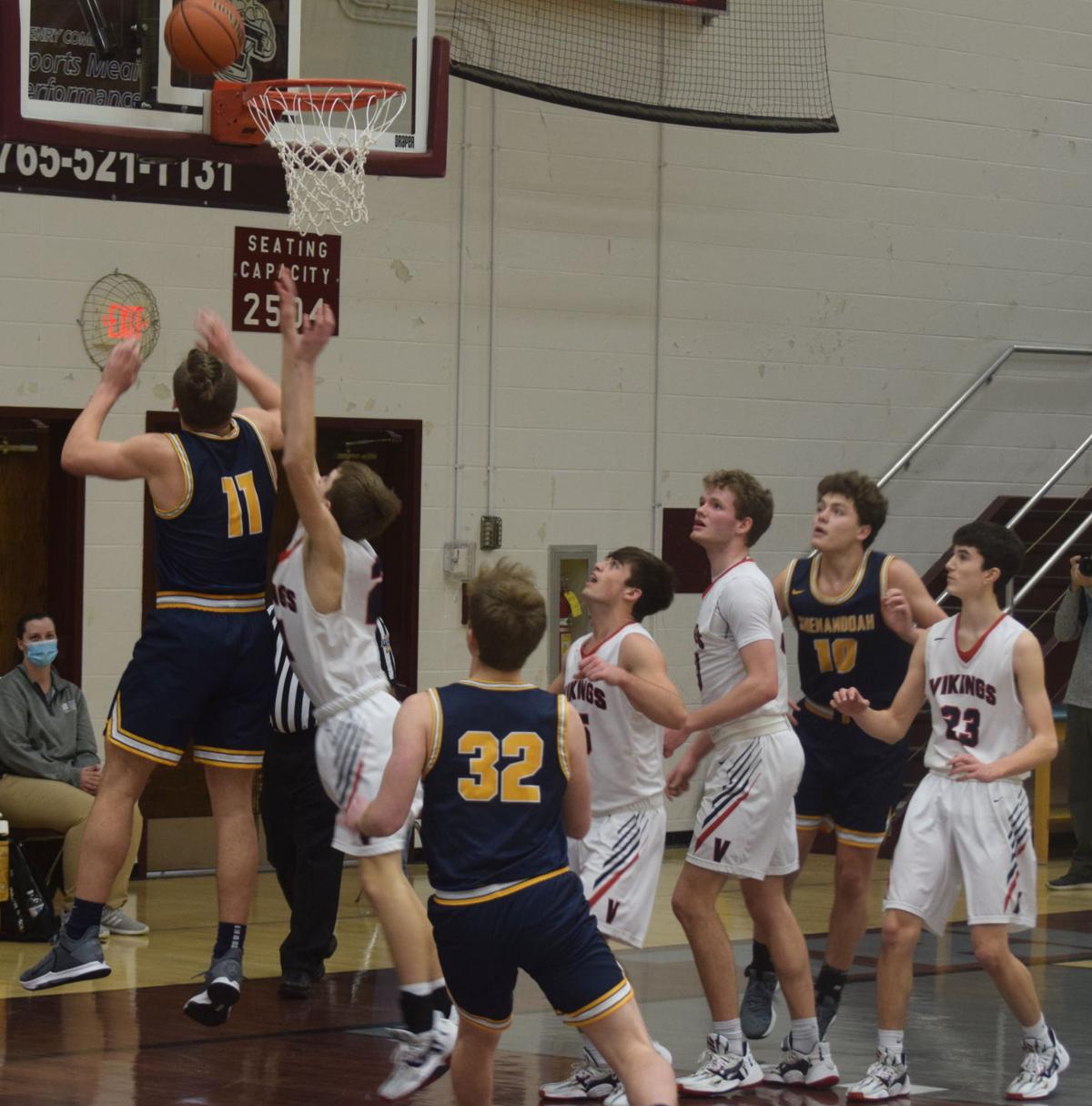 Shenandoah’s Tanner Goff (11) goes up for two points against the defense of Blue River Valley’s Ethan Blackburn (21) as the Raiders’ Lucas Mills (32) and Jasper Campbell (10) plus the Vikings’ Devon Guffey (15), Bevin Hallatt (33), and Brian Walradth (23) watch during Saturday night’s championship game of the Henry County Boys Basketball Tournament at Tri. Shenandoah won its sixth straight county title with a 43-31 victory over Blue River.

Players, coaches, and managers of the Class 2A No. 2 Shenandoah High School boys basketball team smile while holding the trophy in front of the bucket after defeating Blue River Valley 43-31 to win the championship of the Henry County Boys Basketball Tournament Saturday night at Tri.

Shenandoah’s Tanner Goff (11) goes up for two points against the defense of Blue River Valley’s Ethan Blackburn (21) as the Raiders’ Lucas Mills (32) and Jasper Campbell (10) plus the Vikings’ Devon Guffey (15), Bevin Hallatt (33), and Brian Walradth (23) watch during Saturday night’s championship game of the Henry County Boys Basketball Tournament at Tri. Shenandoah won its sixth straight county title with a 43-31 victory over Blue River.

That trend continued Saturday night in the championship game of this year's county tourney, as the Raiders utilized a 14-0 run to start the second half to pull away from Blue River Valley and record a 43-31 victory.

Class 2A No. 2 Shenandoah won its sixth straight Henry County Boys Basketball Tournament championship and improved to 9-3 for the season, while Blue River slipped to a 6-5 mark for the 2020-21 campaign.

This game was unlike the one on Dec. 16 when the Raiders won 71-38 on the Vikings' home court. Blue River battled Shenandoah throughout the game, and that one big run was the difference in the contest.

"Hat's off to Blue River and Coach (Brian) Klein," Shenandoah Head Coach Dave McCollough remarked after the game. "They played us really tough and it was close until we were able to gap them some in the second half. I thought our defense was pretty solid the entire game."

What's more, the Vikings committed only six turnovers the entire 32 minutes against the sticky, pressure defense applied by the Raiders, who had 14 miscues with the ball.

"If someone had told me before the game we would hold Shenandoah to 43 points, I would have said we would win the game," Blue River  Head Coach Brian Klein said afterward. "We did almost everything we wanted to do. We played with high effort, played really well defensively, and got them (Raiders) into foul trouble. The only thing we didn't do well is put the basketball through the hoop. If we fell out of a boat tonight, we wouldn't have hit water."

Blue River's Devon Guffey scored the first basket of the game at the 7:02 mark of the first quarter, but Shenandoah reeled off nine points in a row to grab a 9-2 advantage with 3:38 remaining in the opening period.

The Vikings then outscored the Raiders 6-2 the rest of the quarter to pull to within 11-8 at the end of the first stop.

Four players scored in the first period for Shenandoah, led by Kaden McCollough's five points, while Brevin Hallatt had six of Blue River's eight points in the frame.

McCollough hit a pair of free throws 77 seconds into the second quarter and Jasper Campbell followed with a bucket 30 seconds later for a 15-8 Raider lead at the 6:13 mark of the period.

But the Vikings wouldn't let Shenandoah run away with the game, as Bryce Klein, Hallatt, and Brian Walradth hit back-to-back-to-back baskets to pull Blue River to within one point at 15-14 with 3:41 left in the first half.

The remainder of the second quarter was low-scoring. The Raiders got baskets from Andrew Bennett and Tanner Goff, sandwiched around a Hallatt charity toss, and Shenandoah led 19-15 at intermission.

The Vikings might have been even closer (or had the lead) at halftime had they done better at the foul stripe the opening 16 minutes, as they hit just 5-of-10 charity tosses (50 percent). Blue River hit only 5-of-18 shots from the floor in the first half.

In contrast, Shenandoah was 8-for-21 from the field and 2-of-2 from the free throw line in the first two periods.

That key segment of the game started at the beginning of the third quarter, as the Raiders outscored the Vikings 11-0 in the period to lead 30-15 after three, and then got the first three points of the fourth quarter to complete the 14-0 run for a 33-15 advantage 41 seconds into the final period.

"We were able to get the ball into Graddy that second half, and he either scored or got fouled," Coach McCollough stated. "We had foul problems of our own trying to guard their big guy (Hallatt). I thought Tanner Goff came in off the bench and gave us a tremendous effort."

Hallatt finally ended Blue River's 10:57 scoreless spell by hitting a pair of charity tosses at the 7:06 mark of the fourth quarter to cut the Raider lead to 33-17.

A Bennett free throw was answered by a Guffey three-pointer, and the Shenandoah lead was down to 34-20, but Goff and Campbell hit back-to-back buckets to give the Raiders their biggest lead of the game, 38-20, with 4:30 remaining in the contest.

But the Vikings refused to fold. Behind nine more points from Hallatt and two by Klein, Blue River went on an 11-2 run to trim Shenandoah's lead below double digits at 40-31 with 1:14 remaining in the contest.

However, absent a total Raider collapse, there wasn't sufficient time for the Vikings to come all the way back, and a Graddy free throw plus two more from Bennett closed out the night's scoring.

"I'm incredibly proud of our kids right now," Coach Klein added. "They're (Shenandoah) a fantastic basketball team and they played without (Jakeb) Kinsey tonight, who's a great basketball player. It's a privilege to play against Coach McCollough and his teams. They enable us to pinpoint our weaknesses and help make us better for games down the road. We're still chiseling away, as we're still a work in process."

Shenandoah won the battle of the boards 32-22.

Once again, Shenandoah played without leading scorer Jakeb Kinsey, who was nursing a sore ankle.

"We just need to get healthy," Coach McCollough added. "We've missed Kinsey since the Fishers game. I know he wanted to be out here tonight. Four of our guys had their ankles taped."

Hallatt led the Vikings with 20 points and eight rebounds, Guffey had five points, Klein four points and four boards before fouling out in the fourth quarter, and Walradth added two points.

"Winning county always is one of our goals," Kaden McCollough said afterward, "and we haven't lost one in my four years on the team. We've learned a lot from our three losses, and I think we can beat (Fort Wayne) Blackhawk if we play them again. Winning a state championship is our major goal, and I think we have the team and the talent to do it. 'Unfinished business' has been our mantra since our loss in the semi-state two years ago."