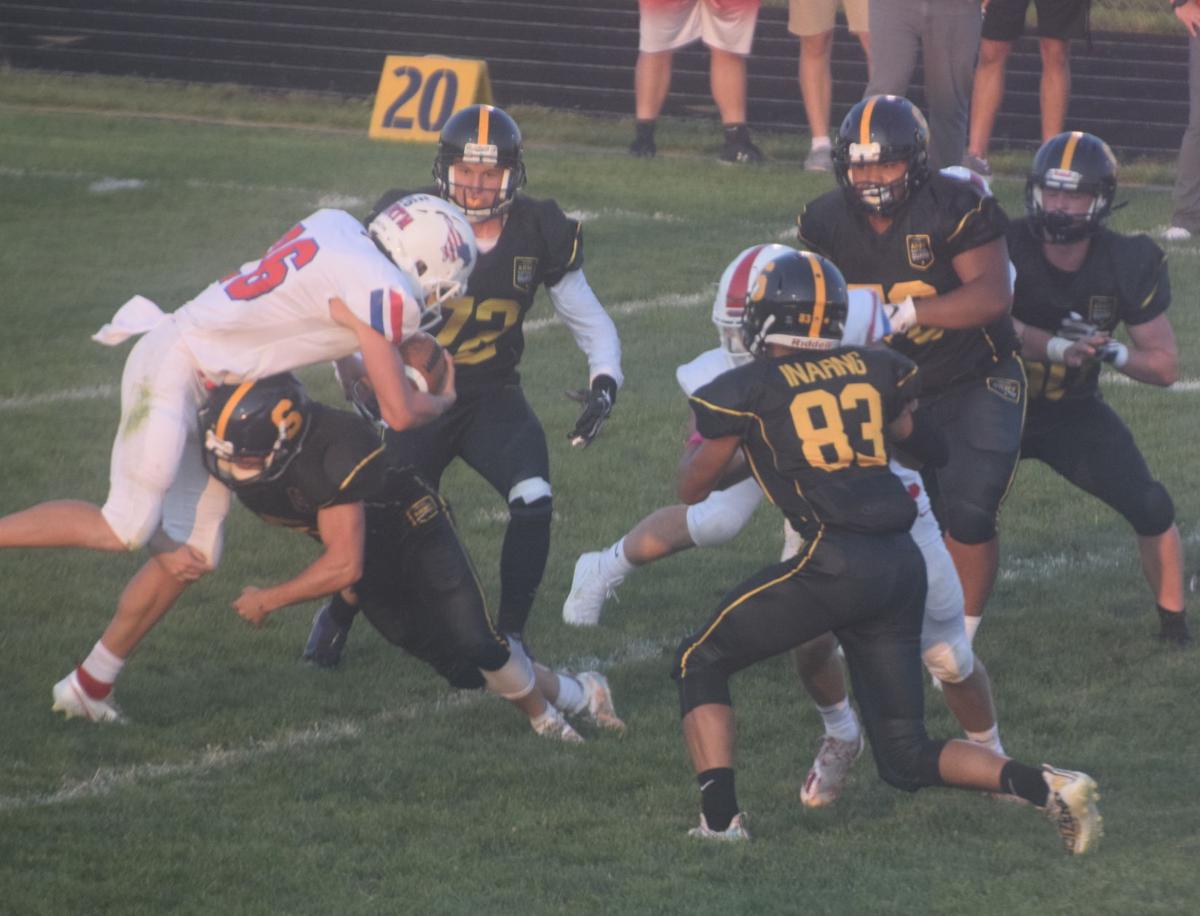 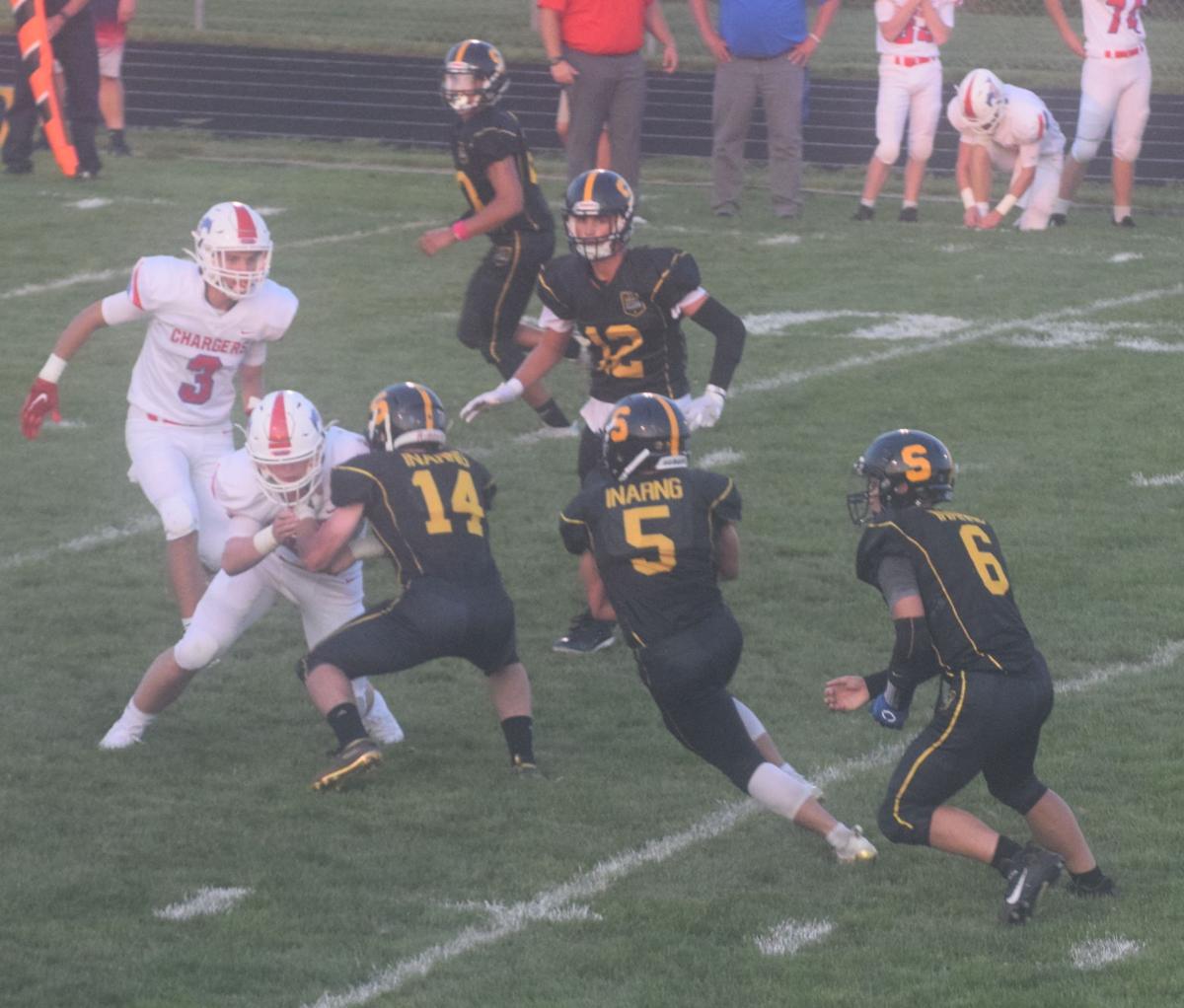 Shenandoah’s Dylan Ayres (5) takes off on a run after a handoff from quarterback Carson Brookbank (6) as Noah Bowen (14) blocks a defender from host North Decatur and the Chargers’ Cooper Parmer (3) and the Raiders’ Drake Stevens (12) are nearby during Friday night’s MEC football game at Dale Green Field. Ayres rushed for 115 yards on 16 carries and scored a touchdown in host Shenandoah’s 20-8 victory.

Shenandoah’s Dylan Ayres (5) takes off on a run after a handoff from quarterback Carson Brookbank (6) as Noah Bowen (14) blocks a defender from host North Decatur and the Chargers’ Cooper Parmer (3) and the Raiders’ Drake Stevens (12) are nearby during Friday night’s MEC football game at Dale Green Field. Ayres rushed for 115 yards on 16 carries and scored a touchdown in host Shenandoah’s 20-8 victory.

The Raiders prevailed 20-8 for their first win of the season, it was their first Mid-Eastern Conference victory of the 2021 campaign, and it was the first-ever win as a football head coach for Jake Stilwell in his initial season at the helm of Shenandoah’s football program.

The Raiders improved to 1-0 in the MEC and 1-2 for the season, while the Chargers slipped to 0-3 both in the conference and overall.

Much credit for the victory goes to the Shenandoah defense, which held North Decatur well under its averages in scoring, rushing, and passing.

Granted, the Chargers have just one senior, offensive lineman/linebacker Nick Gall, on their entire 34-player roster. But North Decatur put up valiant efforts the prior two weeks in losing at Class 2A Eastern Hancock 20-27 and at home against Class A No. 4 Monroe Central by just a point (18-19), so folks knew it wasn’t a pushover.

In addition, Shenandoah got a defensive touchdown on a key play to cap the night’s scoring.

The visitors got their only touchdown when the hosts turned the ball over deep in Shenandoah territory late in the first half.

"Our defense was phenomenal," Shenandoah Head Coach Jake Stilwell remarked afterward. "I told them (defensive players) after the game it was one of the best defensive performances I've seen in a long time. Nobody was perfect, but guys just stepped up and made plays."

The opening 24 minutes were a turnover fest, enough to open a bakery, as the Chargers coughed up the pigskin four times and the Raiders three.

Shenandoah never was able to capitalize on any of the visitors’ first-half miscues, while North Decatur cashed in once off a mistake by the hosts.

Nineteen penalties called, 11 on the Raiders, also played some role in the outcome of the contest.

"We need to clean up a few things, especially on offense, as the game got sloppy at times," Stilwell said. "We were stopped on offense twice deep in their territory, but we didn't turn the ball over at all in the second half."

Shenandoah won the opening coin flip, deferred to the second half, and kicked off to the Chargers to start the game.

A holding penalty on North Decatur’s first play from scrimmage set it back, and the visitors ended up punting.

The Raiders generated a first down on their opening possession, but the drive stalled out at the Charger 49-yard line, and the hosts punted.

The boot by Mayson Lewis traveled to the North Decatur 18, where it was fumbled by a Charger player and recovered by Shenandoah’s Dylan Ayres at that spot.

Four Raider plays generated nothing, and the hosts gave up the ball on downs at the 18.

On the very next play, the Chargers’ Reid Messer gained five yards before fumbling the ball, and again Ayres pounced on the loose pigskin at the visitors’ 23.

A seven-yard run by Shenandoah quarterback Carson Brookbank moved the ball to the 16, but three more running plays could not generate the needed yardage for a first down to keep the drive going, and the ball was turned over to North Decatur.

Largely on the running of Messer, the Chargers generated two first downs and moved the ball out to their 39. But a completed pass on first down that lost eight yards set them back, and they ended up punting to their own 49.

By then, it was early in the second quarter, but it didn’t take Shenandoah long to score.

Two runs by Brookbank and Ayres totaled seven yards, and then Ayres burst up the middle for a 42-yard touchdown run. Landon Redick, the kicker on the C-T All-Area Football Team in 2020, booted the PAT kick, and the Raiders led 7-0 with 9:01 left in the first half.

Two plays after the ensuing kickoff, the Raiders’ Lucas Mills recovered another Charger bobble at the North Decatur 32-yard line.

Two plays after that, the hosts returned the favor by fumbling, and the visitors recovered the ball at their 29.

The Chargers ended up punting and Shenandoah turned the ball over on downs on each team’s next possession.

North Decatur then got something going. Aided by a 24-yard pass from quarterback Carson Parmer to Evan Howell, the Chargers moved to a first-and-10 at the Shenandoah 24-yard line.

However, two plays later, the Raiders’ Drake Stevens picked off a Parmer heave at the 15 with just 55.2 seconds left before halftime.

But the hosts coughed up the pigskin at the 19 on the very next play, and it was recovered by the visitors.

Despite a five-yard penalty on the Chargers, a 15-yard pass completion from Parmer to Messer moved the ball to the six, and a Messer run from there two plays later produced a touchdown.

Shenandoah was penalized twice for offside on the extra-point attempt, so Messer ran a miniscule distance for the two-point conversion and 8-7 North Decatur lead with 27.9 seconds left in the opening half.

The Raiders got a first down on a 16-yard Brookbank to Stevens pass play, but another Brookbank pass was intercepted by the Chargers’ Josh Evans 1.7 seconds before intermission.

Shenandoah received the second-half kickoff. After a holding penalty on the return, the Raiders moved from their 25-yard line to the North Decatur 41, generating two first downs in the process. But Brookbank was tackled for a six-yard loss on third-and-two, and the hosts punted the ball to the Charger 18.

North Decatur went three-and-out and punted the pigskin to its own 39.

Two Brookbank runs totaling 16 yards helped move the ball to the visitors’ 22-yard line, but two incomplete Brookbank passes turned the ball back over to the Chargers.

North Decatur generated nothing on its next drive and punted the ball to its 46.

Starting a drive from there with 17 seconds left in the third quarter, the Raiders utilized big plays of a 15-yard Ayres run and a 12-yard Brookbank to Stevens pass completion to march 46 yards in 10 plays for the go-ahead touchdown.

Evan Fries carried the ball into the end zone on third-and goal from the three. A Brookbank run on a two-point conversion attempt was short of the end zone, but Shenandoah led 13-8 with 7:13 remaining in the fourth quarter.

The Chargers’ Kaden Muckerheide returned the ensuing kickoff from the North Decatur 16 to the Raider 36, and the visitors had excellent field position.

But the Chargers couldn’t take advantage of it, as two runs generated just six yards and Evans dropped a fourth-down pass from Parmer that would have kept the drive alive.

After taking the ball over on downs at its 30 with 5:12 left in the final period, Shenandoah generated a first down and milked more than three minutes off the clock before punting the ball to the North Decatur 27-yard line with two minutes remaining.

A 20-yard Parmer to Evans pass completion and a 10-yard penalty on the Raiders moved the pigskin to the Shenandoah 43 for a first-and 10 play for the visitors with 1:30 left to play in the contest.

But after a pass incompletion on first down, Parmer was hit by Jobe Robinson before getting a pass released, fumbled the ball, the Raiders’ Kolbey Siler picked it out of the air, and rumbled 45 yards the other way for a touchdown.

"There's nothing better than a D-line touchdown," Stilwell added. "Jobe made a big hit on their QB and Kolbey was right there to grab the ball and run the other way with it. It's just another example of guys making plays."

Redick added the PAT boot, and Shenandoah led 20-8 with 1:08 remaining in the contest.

"It was great, crazy," Siler said of his touchdown. "I expected Jobe to get the sack and I was right there when the ball popped out. I've dreamed about that, and it was my first varsity touchdown."

North Decatur mounted a final drive in the waning seconds, moving from its own 14 to the Raider 33 and generating three first downs before the clock ran out.

Shenandoah travels to Wed-Del next Friday for another MEC game.