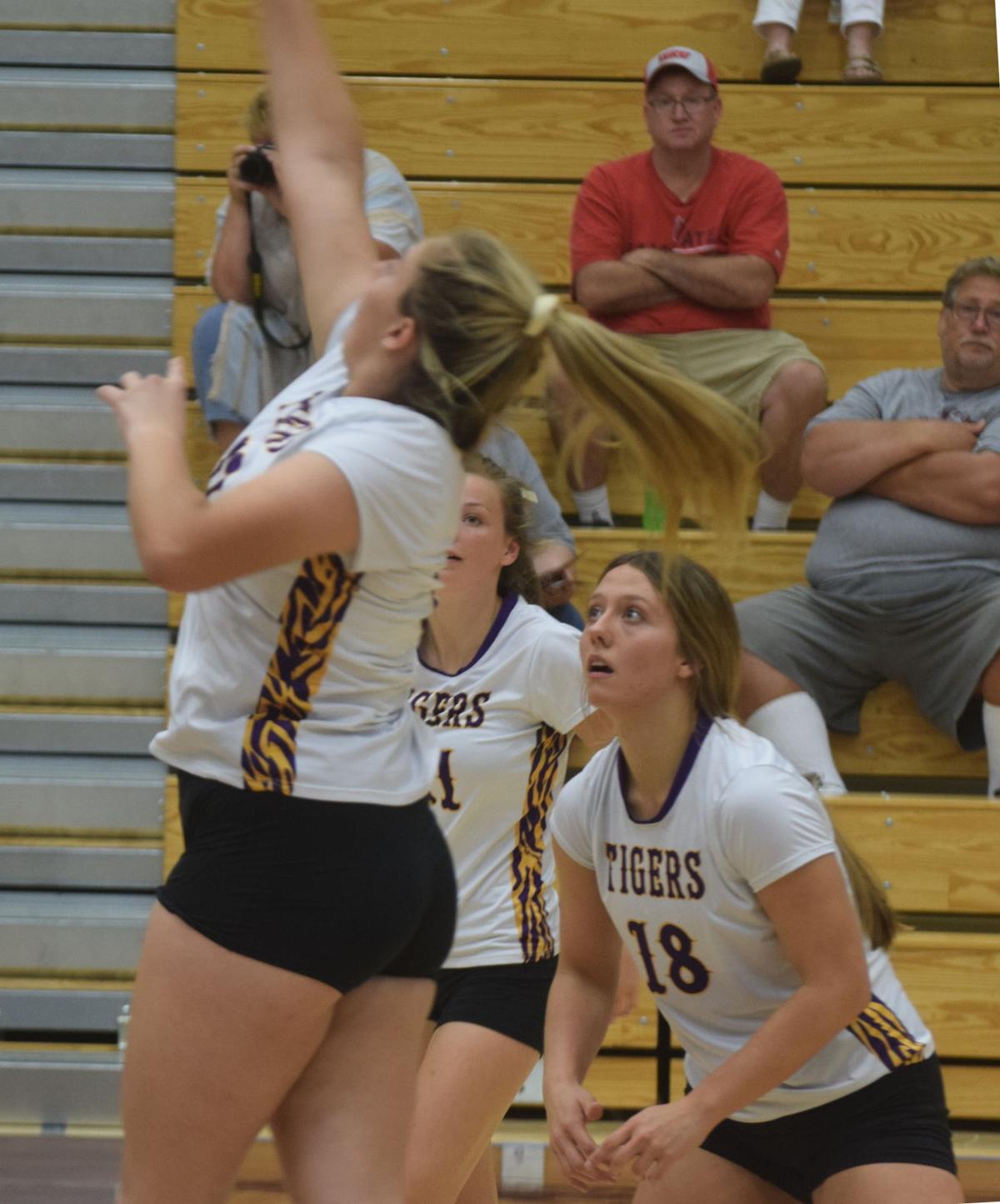 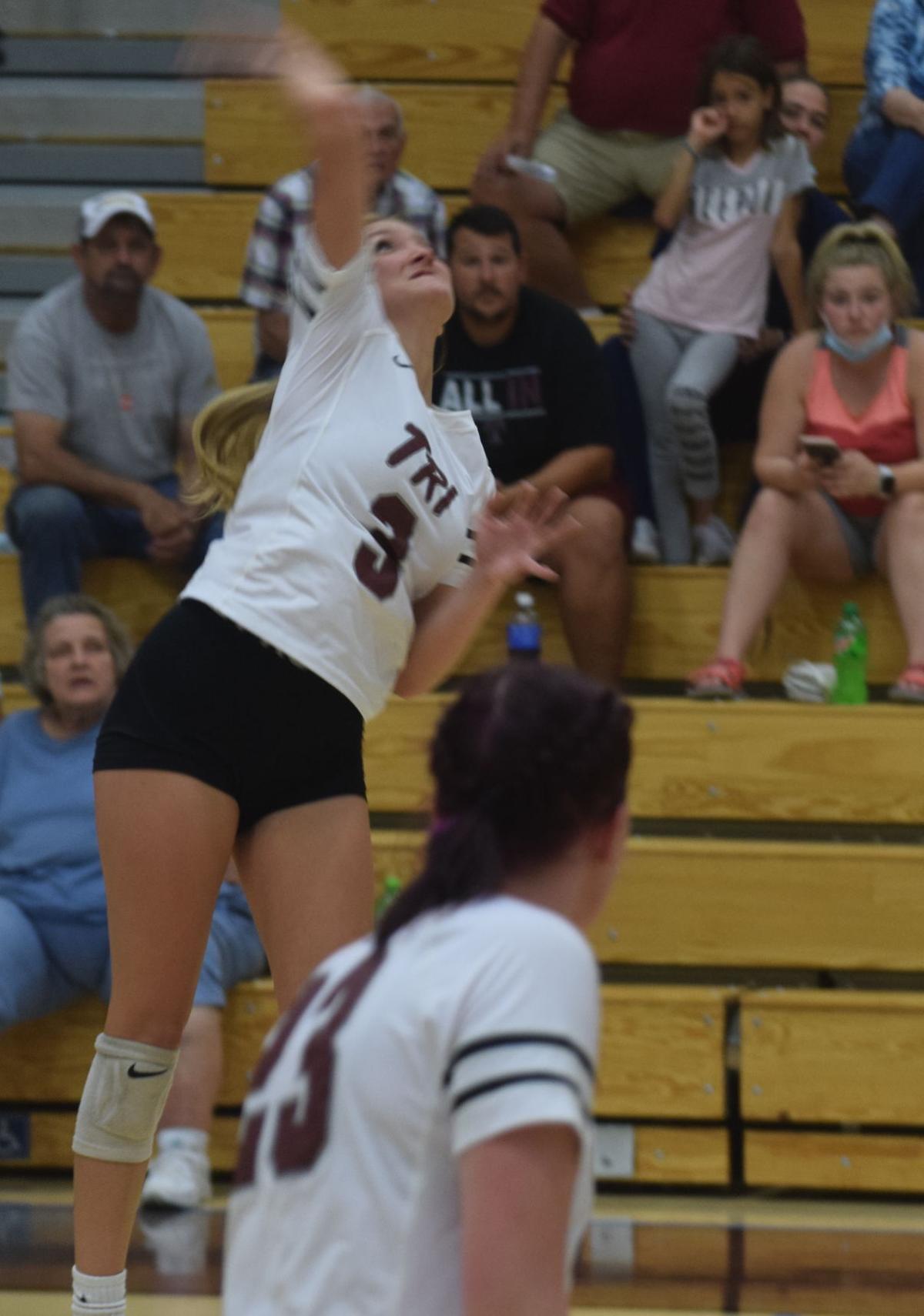 The visiting Tigers controlled the Tri-Eastern Conference match almost from the start and never allowed the Titans to get into any kind of rhythm. As a result, Hagerstown went back home with a 25-10, 25-11, 25-6 victory.

The visitors competed without one of their best players, senior Maddie Pruitt who is out with an injury, but it didn’t make a difference in the outcome.

The Tigers improved to 1-1 in the TEC and 9-6 overall, while Tri slipped to records of 0-3 in the conference and 4-7 for the season.

“You never know what you’re going to get on a Monday,” Hagerstown Head Coach Brian Dale remarked afterward. “We competed in a day-long tournament on Saturday in which we played well, but Maddie got injured. Tri’s ball handling and ball control is much better than in the past and their coach is turning that program around, but we controlled the match tonight and there’s little for me to complain about.”

Actually, the host Titans got off to a good start in the first set, as they held advantages of 4-1 and 5-2.

During that opening segment, Tri got kills from Rylee Boyd and McKaela Betsch plus an Ella Moffett tip, while Hagerstown’s two points came on kills by Carli Cox and Jada Briar.

After the Titans served the ball into the net, Hagerstown got kills from Hannah Pyle and Hattie Hobbs plus two Cox service aces to help it achieve an 8-5 lead, and the Tigers never trailed again in the match.

A Gracin Jessup kill pulled Tri to within 8-6, and the hosts still were within 10-8 after kills from Hobbs and the Tigers’ Bailey Jeffries were mixed in with two hitting miscues by the visitors.

After play resumed, the Tigers hit the ball long, but another Jeffries kill, a Briar block, and five Tri hitting miscues gave the visitors seven consecutive points and a commanding 20-9 advantage.

A Rylee Boyd kill ended that string of points by the visitors, but Hagerstown got two kills from Cox, another by Briar, a Tori Kelley service ace, and a Pyle block to score five straight points to win set one after 15 minutes.

“Good teams make you play bad, and we faced a good team tonight,” Tri Head Coach Pat Carlson said afterward. “When teams are better than you, you try to find ways to contend. I had a list of five things I wanted us to do, and they (Tigers) undid them all in about the first three minutes. We just came up empty tonight.”

The Tigers rolled to a 4-0 lead in the second set on a Titan hitting error and three straight Cox tips before Tri got a Rylee Boyd kill and Cayla Claar service ace to pull to within 4-2.

A four-hits violation on the hosts gave Kelley the ball to serve, and consecutive Kelley service aces, a Pyle kill, and two kills and a block by Cox staked the Tigers to a comfortable 11-2 advantage.

A Moffett block ended that streak of points for Hagerstown, but a Hobbs block and kill, sandwiched around a pair of Titan hitting mistakes, put the visitors ahead 15-3.

Tri then was able to whittle the Tiger lead down to 16-8, as a Moffett kill, a Sarah Heady tip, and a trio of hitting miscues by the visitors gave the hosts five out of the next six points.

Undeterred, Hagerstown got kills from Pyle and Jeffries plus an Ayotte ace to tally six of the next seven points for a 22-9 advantage.

A Heady kill and Ashlynn Boyd service ace pulled Tri to within 22-11, but it didn’t score again in the set as a Cox tip plus two hitting error on the hosts gave the Tigers set two after 15 minutes.

Hagerstown got off to another good start in the third set, as two Ayotte aces, a pair of Briar tips, and a Jeffries service ace helped stake it to a 7-1 lead.

After the visitors served the ball into the net, terminations by Hobbs and Cox, sandwiched around two Kelley serve aces, helped boost the Tigers’ advantage to 12-2.

A Jessup kill stopped the bleeding temporarily, but a Cox kill and ace, a Kelley kill, and a Carli Senese point helped expand the Hagerstown lead to 17-3.

After a Tiger hitting miscue, tips by Hobbs, Pyle and Jeffries plus a Mya Edwards service ace helped the visitors expand their advantage to 23-4.

Leaders for Hagerstown in the match were Cox with nine kills, Ayotte with 13 assists, and Kelley with 15 digs.

“I’m a little unhappy about how we play emotionally,” Carlson added. “I think one reason is our girls are so used to losing, they don’t know how to react to success. I think that comes through experience. We practice hard and make strides in practice. Now, we need to make some game strides.”

“We’ll rest a little the next couple of days while getting ready for Cambridge,” Dale added. “We still need to improve, as our goal is to win a sectional title in October.”