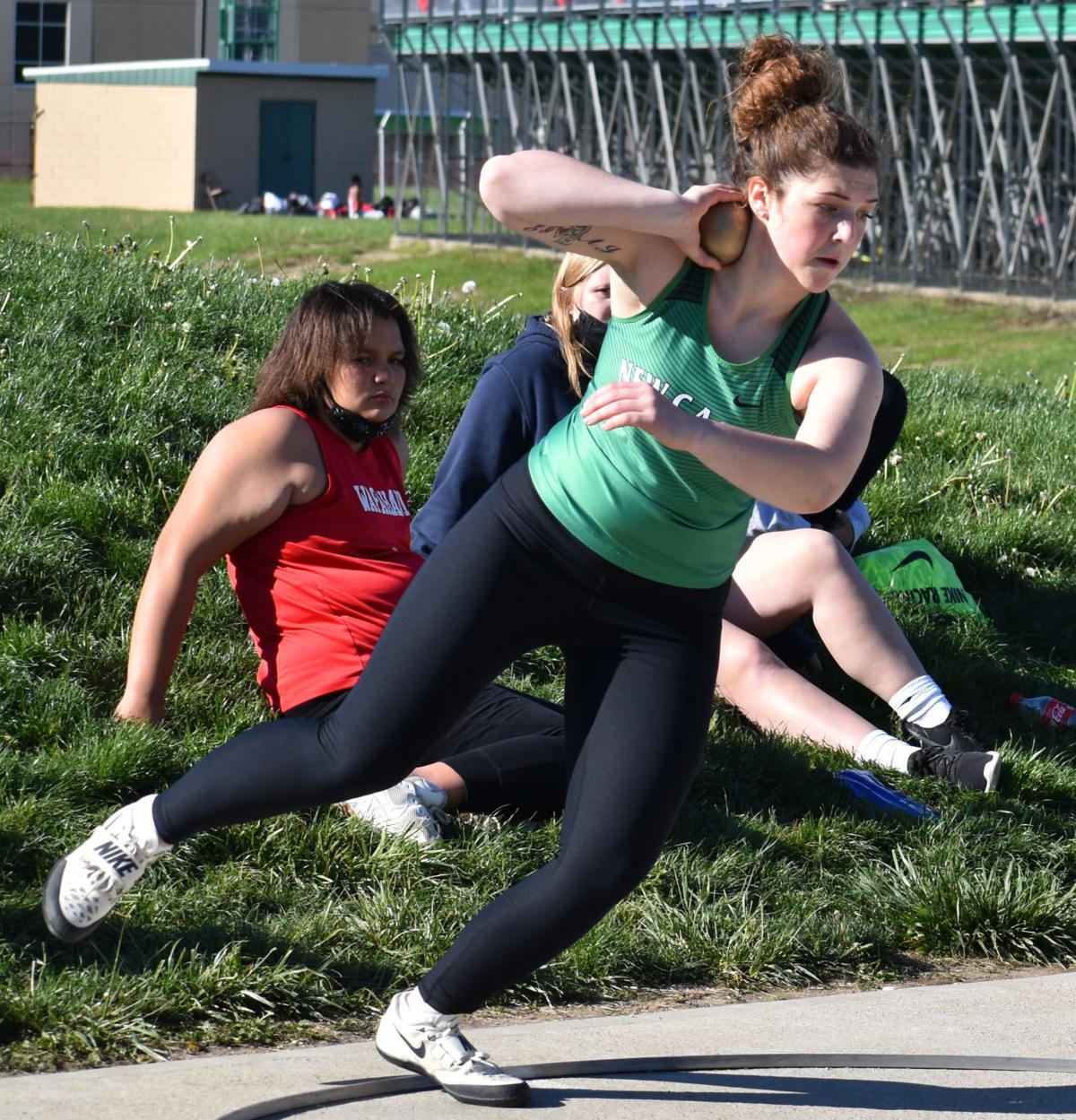 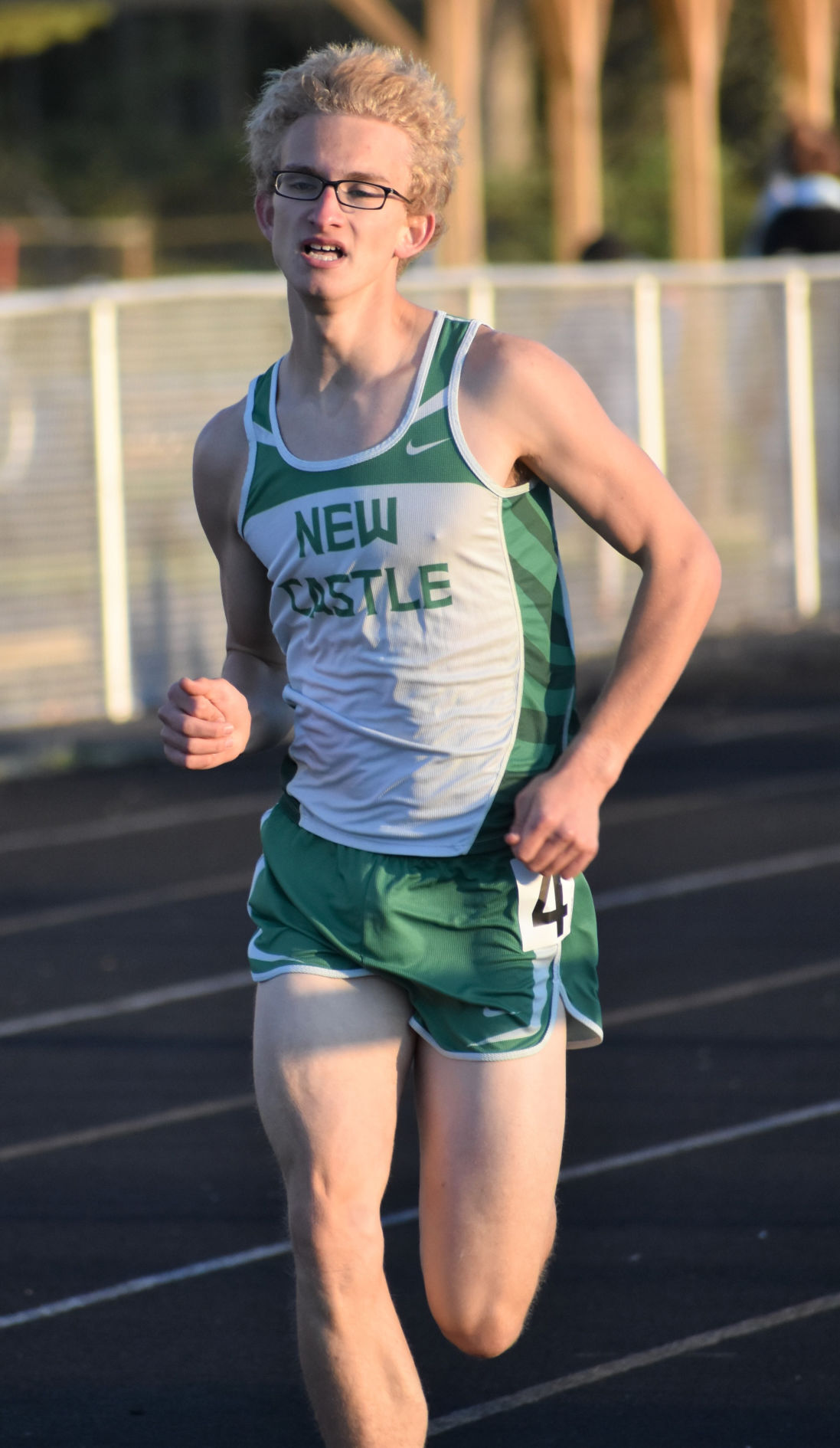 Friday evening, the New Castle High School girls and boys track & field teams hosted their last home meet of the season, the New Castle Invitational. In the girls meet there were four teams and the boys meet consisted of six teams.

The Trojans kicked off the evening by recognizing their seniors competing in their last home meet. Skies were sunny, and temperatures were in the low 60s at the start of the meet dropping to the low 50s as the meet progressed.

As has been the case for many meets this season, the challenge was the strong winds out of the northwest which made things difficult coming down the home stretch in most races.

For both the NC girls and NC boys, the end result was a total team effort with those not competing supporting their teammates and those competing pushing themselves to their limits.

New Castle won the girls meet with 97 points, 23 points ahead of runner-up Wapahani, and now have a record of 28-6 for the season. The Trojan girls claimed the meet team championship with just 13 girls scoring (top 5 places in a four-way meet). New Castle won 11 out of 16 events.

Many of the Trojan points were earned by the usual heavy hitters winning multiple events. Sophomore Ella Garvin won all four of her events, followed by junior Anyssa Hall winning three of her individual events, and sophomore Lydia Harvey winning both of her individual events. Hall, Garvin, and Harvey also set new meet records along with their victories.

Others winning their events for the Trojan girls were senior Eliza Madden in the discus and freshman Sydney Mathews in the 800 meter run. NC also won the 4x400 meter relay.

To start off the meet in the throws, Madden won the discus with a toss of 97 feet 1 inch, followed by her teammate freshman Alaina Bowman in second with a distance of 89 feet. Madden and Bowmen also had a solid night in the shot put with Madden securing second place with 33 feet 1.5 inches followed by Bowman in third with 29 feet 7 inches.

Garvin won her 100 meter hurdle trials race to advance to the finals. In the 100 meter hurdle finals, Garvin edged Connersville and Wapahani girls in the final stages of the race to secure the victory with a time of 18.20 seconds.

Later in the meet, Garvin secured another victory in the 300 meter hurdles by finishing the distance in 49.84 seconds, which was a new meet record.

Anyssa Hall was on fire in the short sprints, with nobody close to her in either the 100 or 200 meter trials or finals. Hall handily won the 100 meter dash trials and returned to prove that was no fluke by winning the finals in a time of 13.69 seconds, which was well over a second faster than the next competitor.

In the 200 meter dash, Hall was again over a second ahead of the next competitor, claiming victory with a time of 28.27 seconds. Hall also pulled through with a victory in the long jump with a leap of 16 feet 7 inches which was two feet farther than her next closest opponent and a new meet record, breaking her own meet record set two years prior.

Junior Ambreet Heera also had a solid night in the short sprints by advancing to the finals in both the 100 and 200 meter finals. Heera pulled through with sixth in the 100 meter dash finals, crossing the line in 15.22 seconds and followed later in the meet with a fifth place finish in the 200 meter dash by clipping the tape in 30.79 seconds.

The Trojans swept the individual distance events with wins in the 800, 1600, and 3200 meter runs. Harvey had no competition in either of her races on her way to setting new meet records in both the 1600 and 3200 meter run.

In the 1600 meter run, Harvey took the lead during the first lap and cruised to an eight second victory with a finishing time of 5:49.02. Sophomore Savannah Kernel also ran a solid race in the 1600 to place fourth with a time of 6:38.18, which was just a couple of seconds off of her personal best.

Later in the meet, Harvey began the 3200 meter run pacing off the shoulder of a Wapahani competitor for the first two laps then took command of the race and never looked back. Harvey’s finishing time of 12:18.69 ended up being over 38 seconds faster than the next competitor as she cruised to victory.

Sydney Mathews pulled through in the 800 meter run with her first high school victory in track & field. Mathews looked strong and confident throughout the race as she strategically moved into position rounding the turn onto the front stretch during the first lap.

Around the 300 meter mark, Mathews moved into the lead and never looked back as she dusted the competition by six seconds with a winning time of 2:45.13, which was a personal best for the season.

After placing fourth in the 800, Savannah Kernel had the same placing in the 800 meter run by running a strong race with a time of 2:59.45. In the 400 meter dash, junior Ava Bell dug deep to achieve a personal best time of 1:08.49 which was good for fifth place.

New Castle scored in all three relay events. In the final event of the evening, the 4x400 meter relay, the first three legs of the NC squad (Bell, Mathews, and Guerrero) kept the Trojans in contention for the win and put the anchor, Garvin, in contention to pounce. And pounce she did, as Garvin steadily made up ground the whole way as she passed Wapahani while rounding the final turn on the way to over a five-second victory with a time of 4:35.76.

The NC 4x100 meter relay squad consisting of junior Adeline Bunner, freshman Maria Mil, Heera, and Hall finished second with a time of 56.29 seconds, which was just fractions of a second out of first place.

Starting off the meet with points was the 4x800 meter relay squad consisting of Harvey, Savannah Kernel, Jamie Kernel, and Mathews, as it secured third place with a season best time of 11:23.54.

The Trojan boys placed second with 123 points compared to first-place Wapahani with 137 points. New Castle won six out of 16 events in the meet, and those six events were won by just three athletes.

Senior Matt Bell won the shot put and discus, senior Jace Logston won both the 100 and 200 meter dashes, and junior Andrew Fewell won the 1600 meter run as well as the 3200 meter run.

Bringing home significant points with two second-place finishes was senior Nate Smith in the shot put and discus. Bell and Smith were well ahead of the competition in the shot put. Bell led the way with 47 feet 9 inches followed by Smith with a toss of 46 feet 7 inches, which was over three feet farther than the third place competitor.

Bell let the disc fly to 127 feet 7 inches to win the event with Smith just over a foot behind his teammate with 126 feet 10 inches.

Logston started off the meet by qualifying for the 200 meter dash finals with a time that was one second faster than the next competitor. Logston proved that was no fluke by winning the 200 meter finals again by over one second by covering the distance in 23.31 seconds.

Logston was also victorious in the 400 meter dash, pulling away at the end of the race, with a time of 52.13 seconds.

Logston was not the lone Trojan scoring in the 200 and 400. Sophomore Brevan Thrine qualified for the finals in the 200 meter dash and secured sixth place with a time of 25.56 seconds.

In the 400 meter dash, freshman Isaac Madden continued to be a solid NC second man in the event by placing fourth in a time of 55.33 seconds.

Logston also scored points for the Trojans in the long jump by placing fifth with a leap of 18 feet 2 inches.

Andrew Fewell was victorious in the two longer distance events, the 1600 meter run and the 3200 meter run. After a brief battle for the front spot, Fewell established an early lead in the 1600 and was well on his way to victory when a Wapahani runner put on a surprise surge toward the front.

Luckily, Fewell recognized the competition closing in and also put on a final surge to the finish line, keeping his pursuers at bay by over two seconds. Fewell’s winning time was 4:48.66. Also scoring for the Trojans in the 1600 meter run was senior Ayden Humbles in sixth place with a time of 5:07.95.

Junior Caleb Grow looked strong as he stayed in the mix for the lead most of the race in the 800 meter run. Ultimately, Grow placed third with a season best time of 2:10.28. Just out of scoring in the 800 was freshman Colten Lawson in seventh with a personal best time of 2:25.91.

NC had two scorers in both of the hurdle events. Both junior Kyle Gabbard and senior Jack Taylor qualified for the finals in the 110 meter high hurdles.

In the 110 hurdle finals, Gabbard grabbed fourth while Taylor followed in sixth with times of 18.17 seconds and 19.25 seconds, respectively.

Gabbard returned later in the meet for the 300 hurdles race along with senior teammate Ethan Moore. Moore secured third place, covering the distance in 46.48 seconds, while Gabbard followed in fifth with a time of 47.06 seconds.

The Trojans scored in all three relay events. The NC 4x800 relay squad consisting of Fewell, Grow, sophomore Bradley Henderson, and Moore placed third in a time of 9:17.68.

A bit later in the meet, the Trojan 4x100 relay squad consisting of freshman Braylon McRoberts, Gabbard, Thrine, and sophomore Jaykwan Guerrero secured fifth place with a time of 49.81 seconds.

To close the meet in the 4x400 meter relay, the Trojans were in the mix for the win the entire way. Leading off for NC was Madden, establishing the Trojans toward the front of the field. After the hand-off to Grow, NC made a bid for the lead.

When Grow handed the baton to Moore, Wapahani was trying to pull away but Moore kept NC in contention. When Moore made the final hand-off to Logston, Wapahani was pulling away but Logston had other things in mind as he closed the gap and pulled up to the Wapahani runner.

Unfortunately, the effort to get NC back into the mix had taken everything Logston had and NC settled for second place with a time of 3:42.59, just 1.5 seconds behind first-place Wapahani.