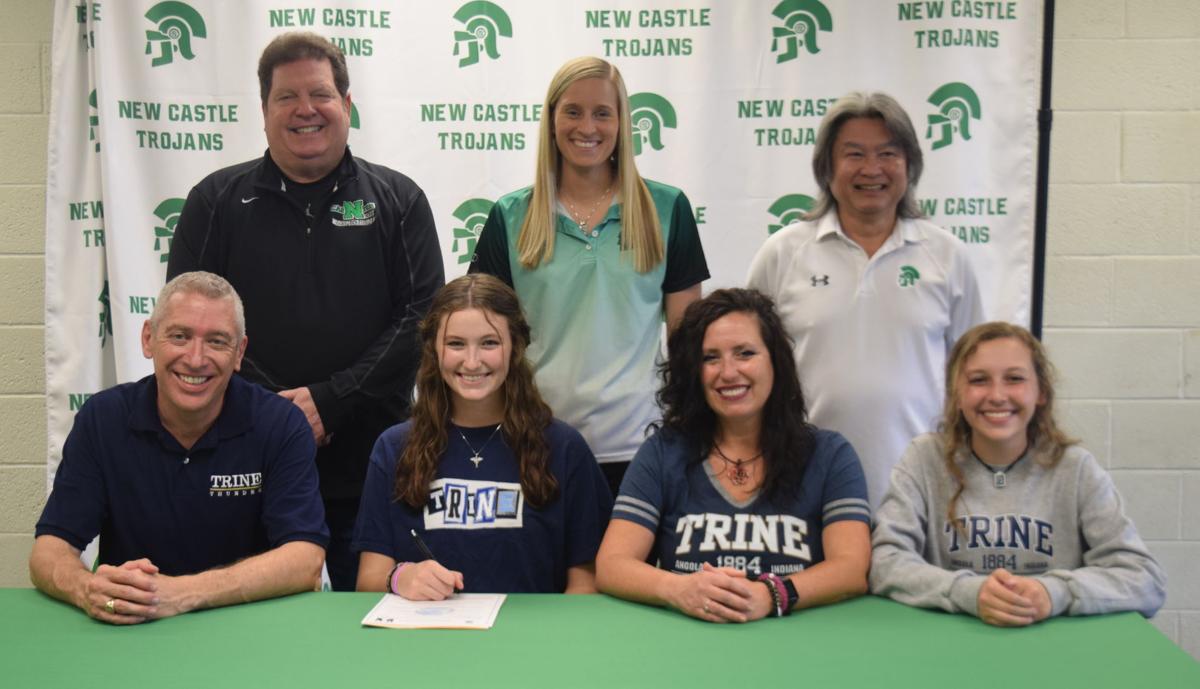 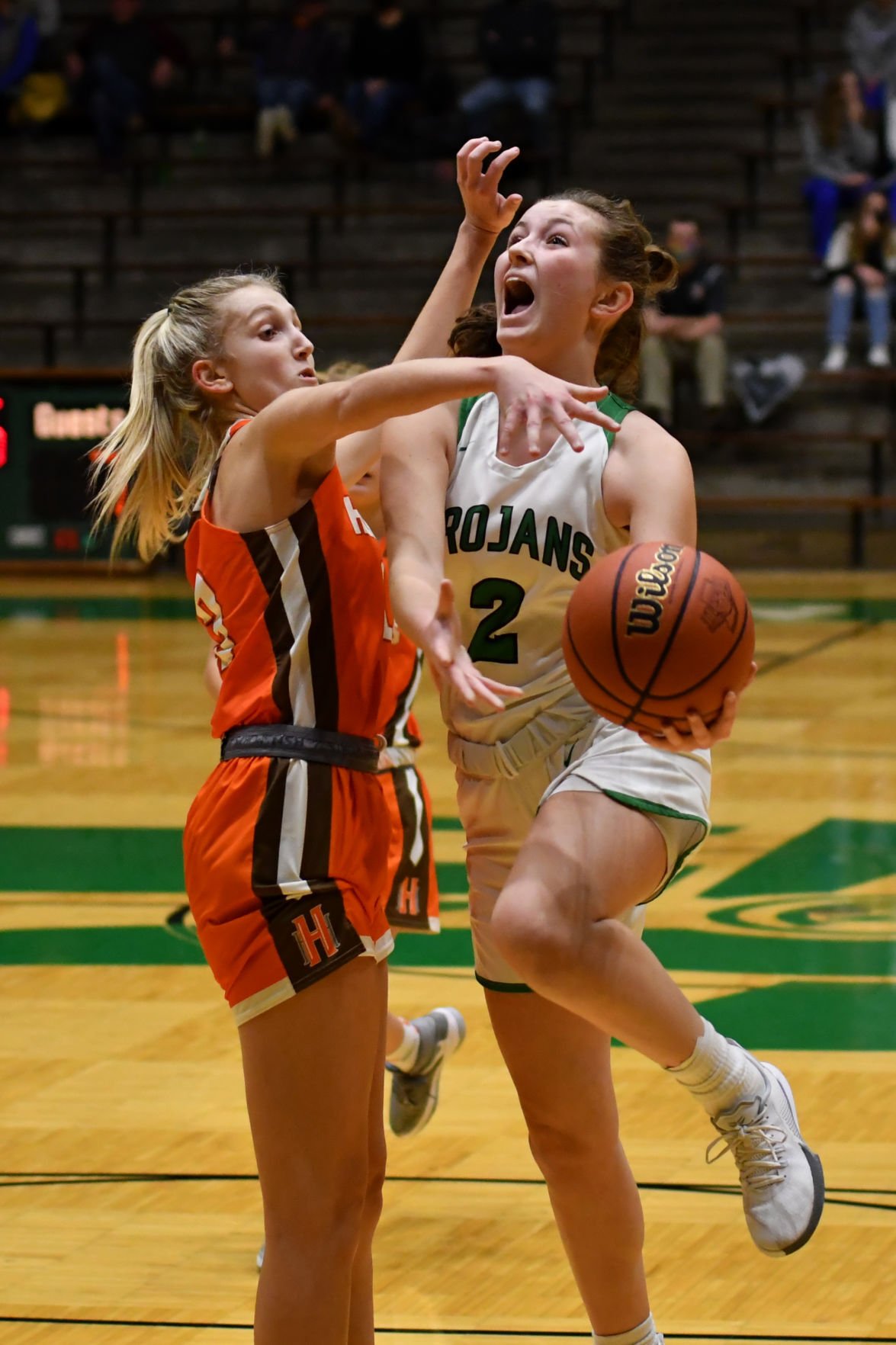 New Castle senior Macayla McGowan (2) goes in for a lay-up against a player from Hamilton Heights during the girls basketball Class 3A Sectional 24 semifinals Feb. 5 in the Fieldhouse. It was McGowan’s final game of her high school career, as next season McGowan will be playing women’s basketball for the Trine University Thunder.

New Castle senior Macayla McGowan (2) goes in for a lay-up against a player from Hamilton Heights during the girls basketball Class 3A Sectional 24 semifinals Feb. 5 in the Fieldhouse. It was McGowan’s final game of her high school career, as next season McGowan will be playing women’s basketball for the Trine University Thunder.

If an athlete has a good high school career in a sport, he or she might get an opportunity to play that sport at the collegiate level.

That’s what has happened to New Castle High School senior Macayla McGowan, as Thursday afternoon in the Fieldhouse McGowan inked a letter of intent to play women’s college basketball for Trine University in Angola starting in the upcoming 2021-22 season.

McGowan was asked why she picked Trine over some other college or university she might have attended.

“Their PA (Physician’s Assistant) program really sold me,” McGowan replied. “But I really loved their campus. It’s new, as is their gym, their coaches are great, and their team is good. It was the entire package that made me decide it was the place for me.”

McGowan, a good golfer, had an opportunity to play golf in college, too, but chose the hardwood sport.

“Trine actually wanted me to play golf for them,” McGowan said. “I thought about it, but chose basketball. With the program I’m going to be in, two sports might be too much for me, but I do plan to play golf up there because they have a nice course on campus.”

McGowan was asked what her role might be playing for the Trine Thunder.

“The coach told me he’s looking at me as a shooting guard or small forward,” McGowan remarked, “but most likely a shooting guard. He wants me taking three-pointers and jump shots rather than driving to the basket a lot like I did in high school. He wants me to develop a quicker release on my shot and to make better decisions on when to shoot and when to pass.”

McGowan, an excellent student, has definite plans to use her degree once she graduates from Trine.

“My desire is to be a physician’s surgical assistant in a pediatric hospital,” McGowan stated. “The nice thing about the PA program at Trine is that you can get your certification while you are there, and then can go to work right after graduation.”

McGowan started her high school playing career as a freshman on the New Castle junior varsity team during the 2017-18 season, and got a lot of time on the court, as she was just one of five JV players on that squad.

“When I started high school, I never thought I would play basketball in college,” McGowan said. “But then I played a lot on the JV as a freshman, got some varsity experience, and things took off from there.”

McGowan got her feet wet in varsity play that season in Head Coach Brandon Bradley’s only season at New Castle. McGowan played in four varsity games, scored a total of four points, and had an assist and a steal apiece for a Trojan team that finished 10-14.

Molly Swift became the new Head Coach at New Castle the following season, and McGowan saw substantial playing time for the Trojan varsity during that 2018-19 campaign.

Swift is proud of what her basketball pupil, McGowan, has accomplished.

“I was her coach,” Swift said, “but I can’t take much credit for the player she’s become because that was due to the the hard work Macayla put in. A lot of people don’t realize the importance of the JV experience. She played on JV constantly as a freshman, which made her ready to step into a starting role her sophomore season and handled that pressure.”

“That was a fun season,” McGowan said of her sophomore campaign. “I earned a starting spot, got to play with Cameron, we all bounded the second half of the season, and we won the sectional before losing our regional game against Angola.”

COVID-19 issues affected almost all high school teams during the recently-completed 2020-21 season, and some scheduled games were cancelled.

McGowan was one of three team captains during her senior season at New Castle, and almost finished the 2020-21 campaign averaging a double-double with 12.8 ppg and 9.9 rpg playing 17 of 19 games for a Trojan team that finished with a 2-17 record.

“We looked in the records and found out that I finished 10th in school history in career rebounds,” McGowan said. “I’m proud of that.”

McGowan also averaged 1.1 apg and 1.5 spg for a varsity team that played a lot of sophomores plus two freshmen.

“After Cameron’s graduation, Macayla had to play more of a leadership role,” Swift remarked. “I think her parents helped instill that trait in her. Especially her senior season, Macayla had to become very versatile and play several roles for us. That won’t happen at Trine, as she can hone in on two or three things Trine wants her to do and become good at them.”

McGowan was named to the C-T All-Area Second Team after both her junior and senior seasons. She also was named to the Hoosier Heritage Conference All-Academic Team and was just one of 35 senior girls from around the state to be named to the Indiana Basketball Coaches Association/Franciscan Health All-State Academic Team.

McGowan was a four-year member of the NCHS varsity girls golf team, and competed with classmate Faith Firle for the No. 1 spot on the team during her junior and senior seasons.

In addition, McGowan ran track her first three years in high school, but decided to forego that sport her senior season.

But just because McGowan is not participating in a sport this season doesn’t mean she is idle.

“I’m in unified track,” McGowan noted, “and Maddy Meek and I shoot and lift weights together after school and I do cardio workouts before school.”

McGowan is looking forward to her next step in life, but isn’t forgetting the past.

Swift is also happy for McGowan.

“She’ll get a degree in what she wants to do in life plus play a sport she loves for for more years,” Swift added. “Her success will serve as a model for our girls who follow in her footsteps. We can’t replace Macayla, but only fill the roles she played for us. I’m looking forward to seeing her play in person in college, and know she’ll be successful in anything she does.”