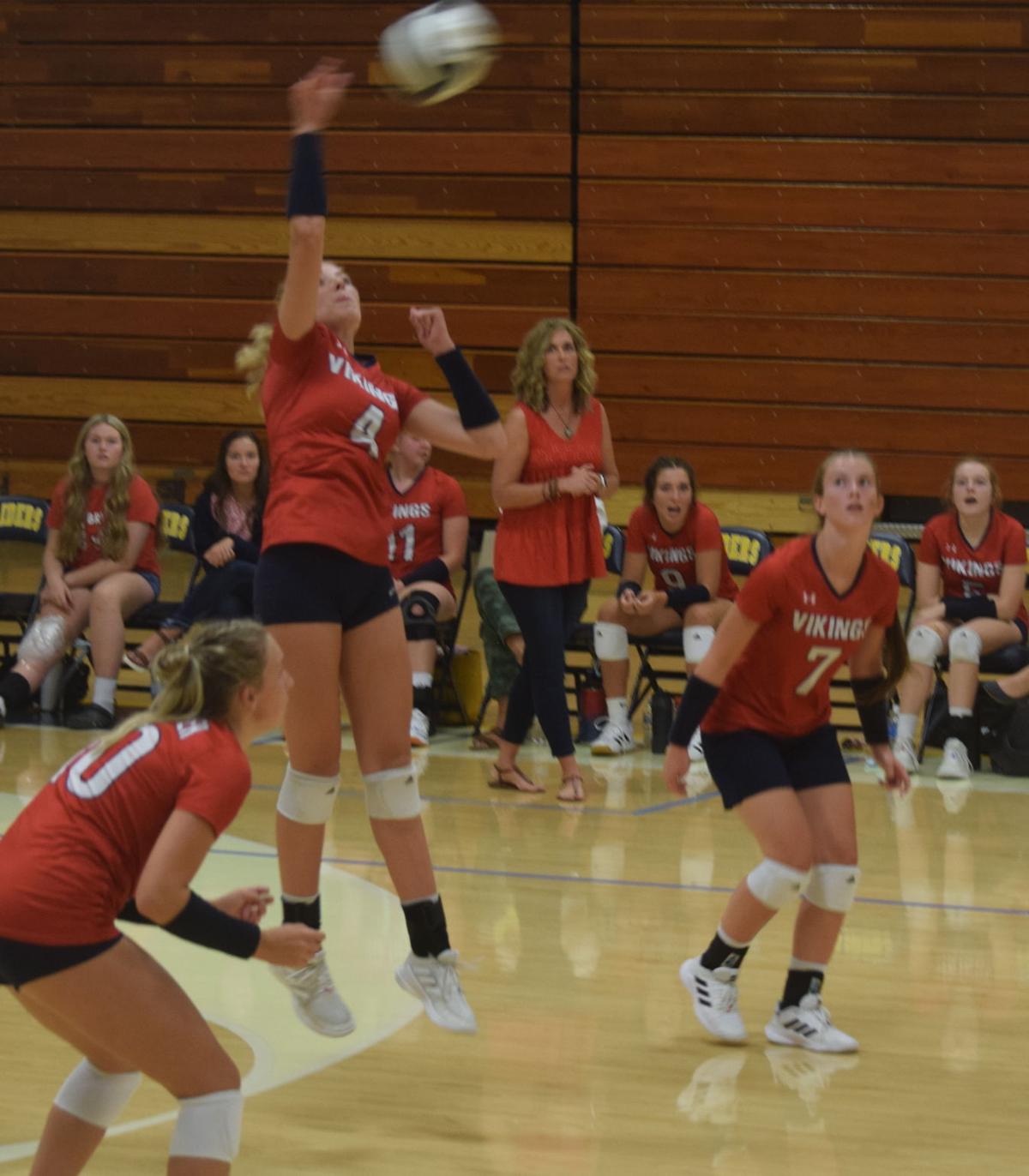 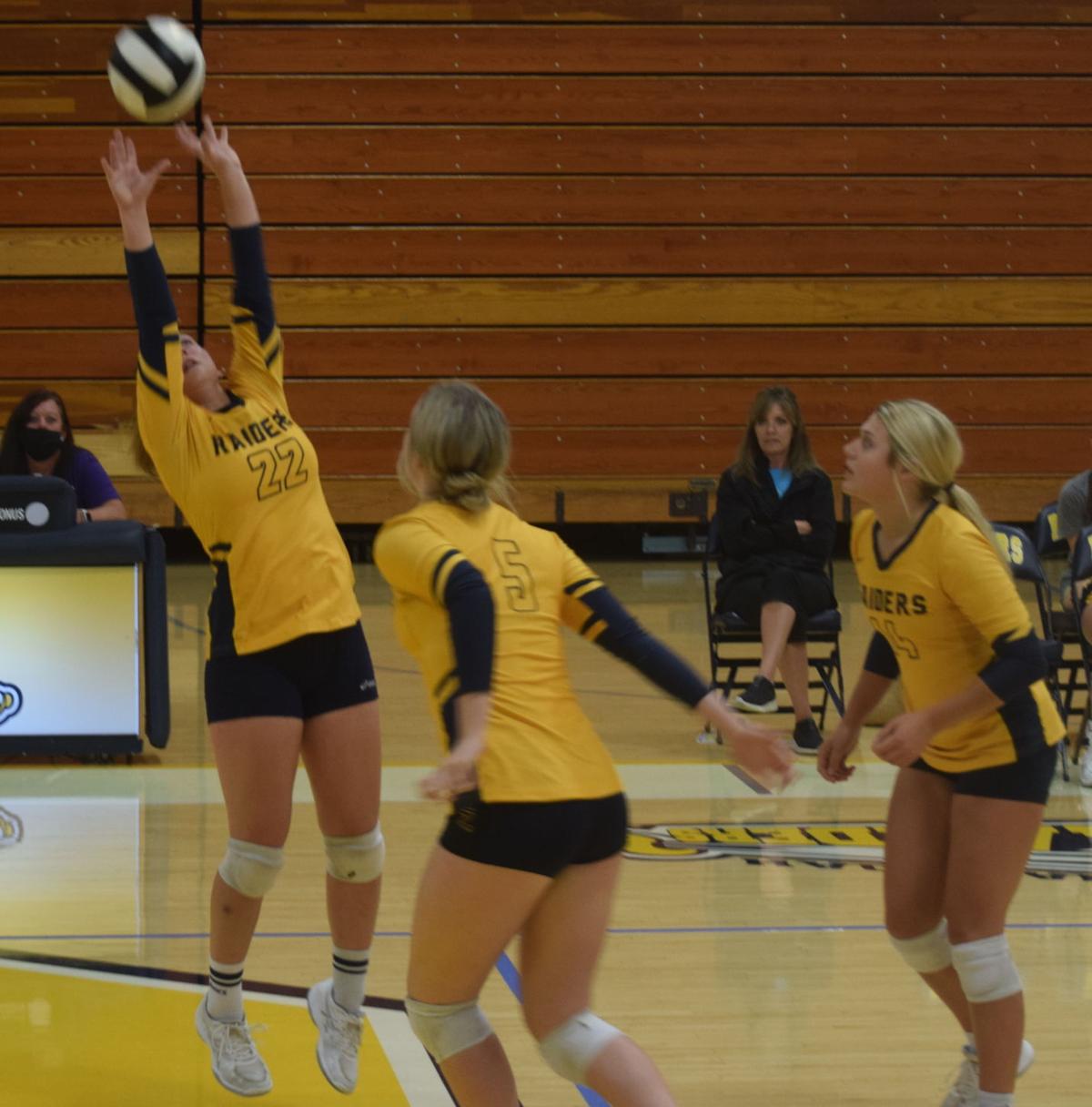 The visiting Vikings got good play at the net from senior Ally Madden and sophomore Maciah Driskill, and Blue River’s team banded together to make up for the absence of regular starter Kearsten Perdue to sweep past the Raiders in three sets 25-17, 25-17, 25-22.

The Vikings improved to 3-3 in the MEC and 5-5 for the season, while Shenandoah dropped to 0-3 in the conference and 2-7 overall.

“Ally and Maciah led us tonight,” Blue River Head Coach Sonja Thornburgh remarked after the match, “but they would be the first ones to credit their teammates for getting them the ball where they could do something positive with it. Our team chemistry was very good out on the floor tonight.”

“This is kind of a transition period for our girls,” Kimball said afterward, “and they are trying to implement a few things Coach MacIntyre has shown them. Madden is a really good player for them (Vikings), and we had a little trouble handling her tonight.”

Largely on a Madden kill, a Trinity Driskill service ace, and an Isabelle Perdue point, Blue River raced out to a 5-1 advantage in the first set, and a Maciah Driskill kill stretched the lead to 7-2.

Behind 8-3, the Raiders tallied four consecutive points, three on a Cynthia Swenk tip and kill and a Hannah Zody service ace, to pull to within a point at 8-7.

However, another Maciah Driskill kill began a stretch during which the Vikings scored eight of the next nine points for a 16-8 advantage.

In addition to that kill during that period of time, Madden had two kills, Trinity Driskill a block, and Tori Zentz an ace for the visitors, while the host’s lone point came on a Kenedi Helms kill.

Blue River scored seven of the next 11 points to increase its lead to 23-12, five of those points coming on a pair of kills apiece by Madden and Maciah Driskill plus a Trinity Driskill service ace. Shenandoah got a Kaylin Nolen kill during that segment.

The Raiders got another Zody kill, a Helms tip, and an Elise Boyd service ace for three straight points, but the Vikings scored two of the final four points, capped by a Maciah Driskill cross-court kill, to win set one after 18 minutes.

During that period of play, Blue River got three kills and a tip from Madden and a trio of terminations from Maciah Driskill, while Shenandoah got a pair of kills each from Nolen and Helms, a termination apiece from Zody and Boyd, and a Makayla Starnes point.

A Raider hitting miscue and a Madden service ace gave the visitors the lead for good at 15-13, but a Zody tip and kill pulled the hosts to within 16-15.

Helped by a Maciah Driskill kill and a Trinity Driskill tip, the Vikings scored five points in a row to go ahead 21-15. A ball hit into the net by Blue River and a Helms ace trimmed it to 21-17.

However, a trio of Shenandoah hitting errors and a Trinity Driskill kill gave the Vikings set two after 19 minutes.

The third set remained tighter than the second one did. Aided by two Madden kills, Blue River jumped out to a 3-1 lead, but the Raiders tallied seven consecutive points to surge ahead 8-3. Nolen had a trio of consecutive service aces in that opening flurry for the hosts.

The Vikings began hacking away at their deficit, actually erasing all of it as they went on a 12-5 run to grab a 15-13 advantage.

During that period of play for the visitors, Madden had four kills and a service ace and Maciah Driskill had a pair of terminations. Helms got a kill for the hosts during that time.

Shenandoah scored four of the next six points, two on kills from Zody and Swenk, to forge the final tie at 17-17. Maciah Driskill got a kill during that segment of play for the visitors.

A serve into the net by the visitors and a Helms ace pulled the Raiders back to within 23-21. The Vikings reached match point on another Madden kill, but a line violation gave the hosts a point.

However, the Raiders served the ball long, handing Blue River set three after 23 minutes and the match three sets to none.

“We miss Kearsten,” Thornburgh added, “and she is working hard to be back before tournament time. In her absence, our other girls are working hard, stepping into various roles, and are doing whatever is asked from them. We’re getting healthy, and this win is a good stepping stone to the rest of our season.”

Of Blue River’s 33 assists, Kaylyn Denney had 19 and DuBois 13. The Vikings recorded 53 digs, led by 17 from Trinity Driskill, eight from Isabelle Perdue, and seven apiece by Maciah Driskill, Denney, and Madden.

As of press time, no parameters in the match for the Shenandoah players had been listed on MaxPreps.

“I was pleased with our energy level that third set,” Kimball added. “We played with some urgency and our crowd helped us. A few little things bothered our girls tonight. We just hope to keep improving as the season goes along.”