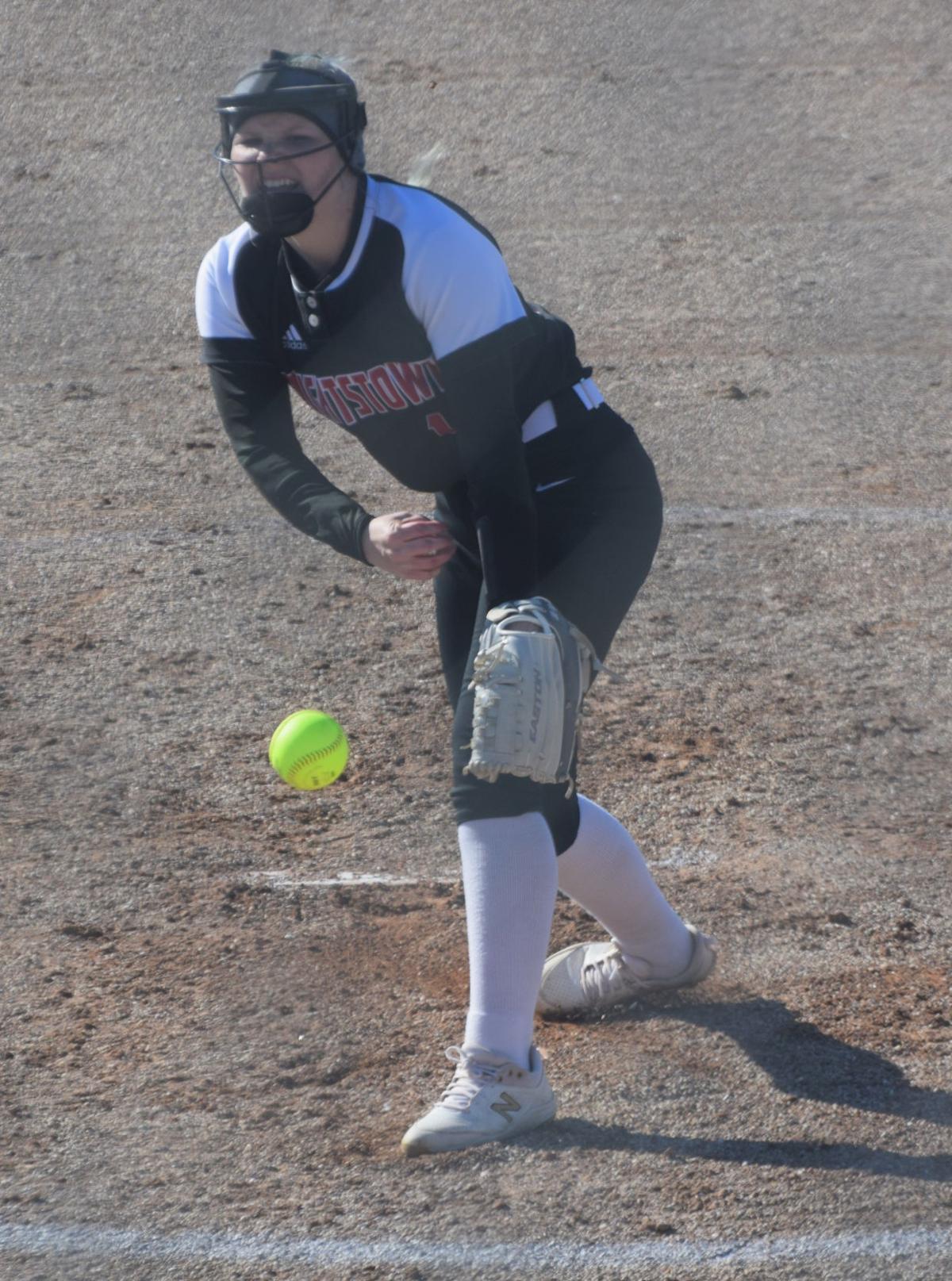 , but the host Panthers lost to the Wildcats 9-5. 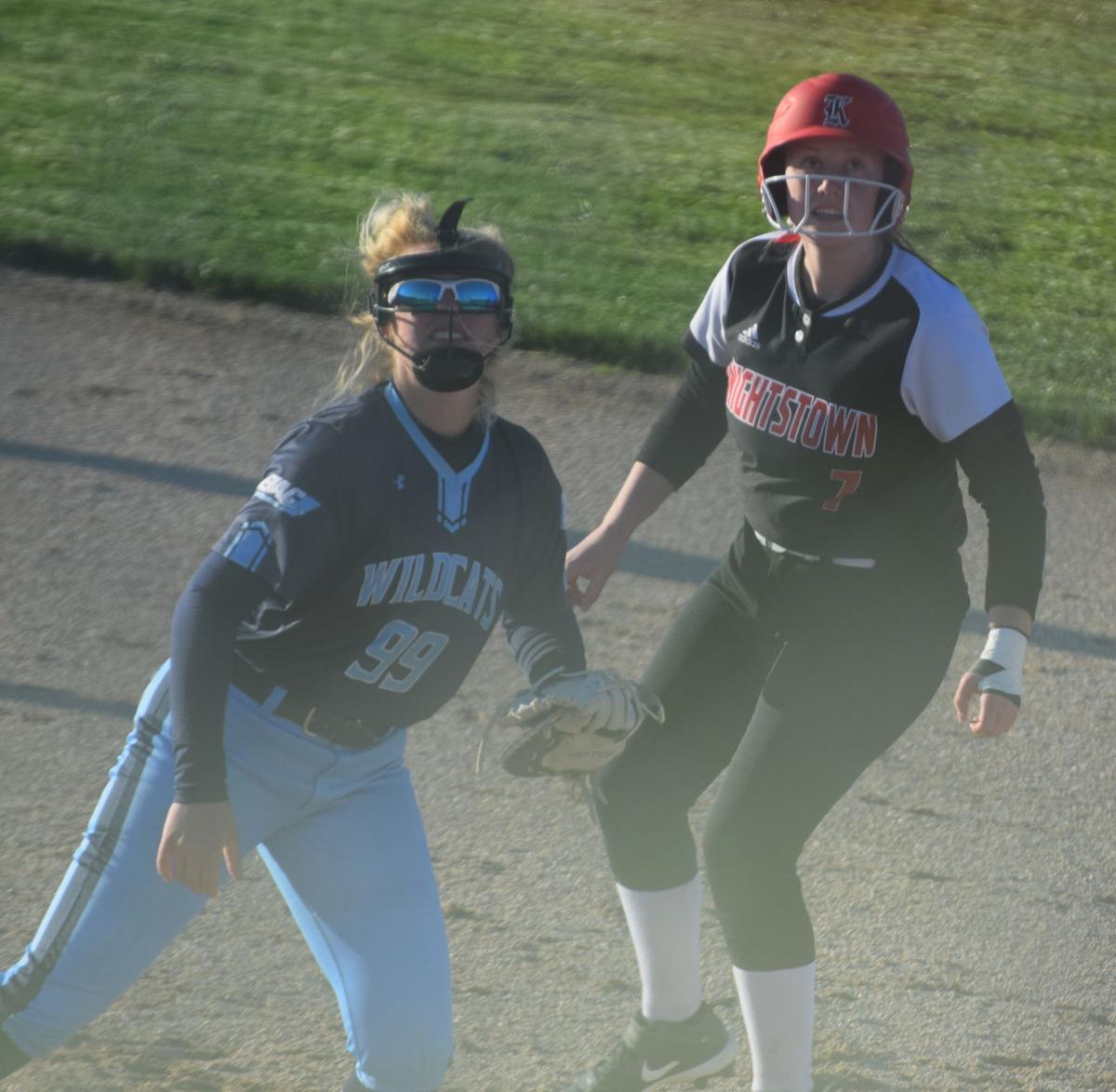 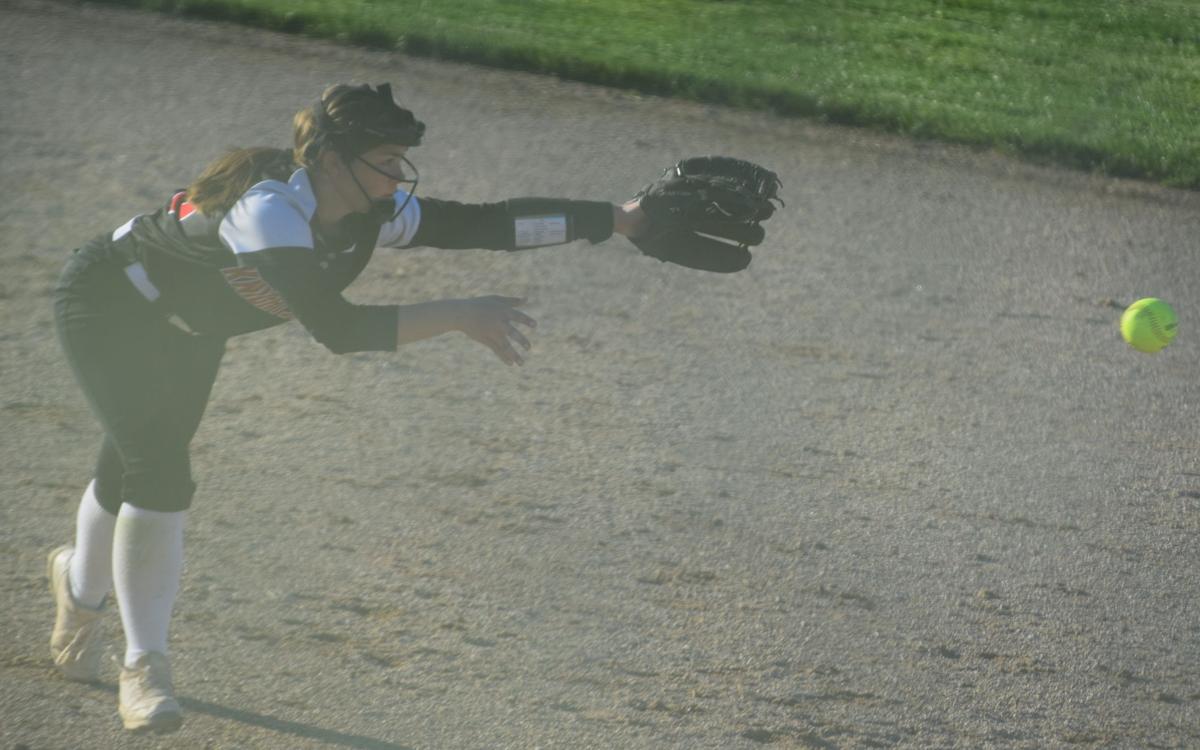 FAR LEFT: Knightstown freshman second baseman Allie Smith tosses the ball to first base during the top of the fifth inning of Friday evening’s high school softball game against visiting Franklin County. The host Panthers fell behind early 4-0, couldn’t catch up, and lost to the Wildcats 9-5.

LEFT: Knightstown sophomore pitcher Zoe Beabout hurls the ball toward the plate against a batter from visiting Franklin County during Friday evening’s high school softball game. Beabout tossed all seven innings and got on base four times.

, but the host Panthers lost to the Wildcats 9-5.

FAR LEFT: Knightstown freshman second baseman Allie Smith tosses the ball to first base during the top of the fifth inning of Friday evening’s high school softball game against visiting Franklin County. The host Panthers fell behind early 4-0, couldn’t catch up, and lost to the Wildcats 9-5.

LEFT: Knightstown sophomore pitcher Zoe Beabout hurls the ball toward the plate against a batter from visiting Franklin County during Friday evening’s high school softball game. Beabout tossed all seven innings and got on base four times.

KNIGHTSTOWN — The Knightstown High School softball team hosted Franklin County on a sunny, but windy and somewhat cool, Friday evening and fell behind right from the get-go.

The host Panthers were forced to battle back the entire game and were not able to score enough runs to catch up or go ahead. So the visiting Wildcats went back to Brookville with a 9-5 victory.

Franklin County improved to 8-6 for the season while Knightstown dipped to 6-7.

“We dug ourselves a hole early and never were able to catch up,” Knightstown Head Coach Adrian Darling said after the game. “We just needed more baserunners. But our girls never gave up and battled them (Wildcats) all night.”

Sophomore Zoe Beabout started in the circle for the Panthers and pitched a complete game in absorbing the loss.

“Zoe pitched well and helped herself at the plate,” Darling remarked.

Beabout retired the first batter she faced in the top of the first inning, but then, in order, the Wildcats’ Kassidy Schell blooped a single to short centerfield, Josie Rolfes got plunked by a pitch, Bree Bischoff singled to center, Michaela Ferman singled to right center, and Anne Becker singled to left field.

During this period of activity, Schell, Rolfes, and Bischoff all scored and Ferman and Becker were on second and first base, respectively. Beabout uncorked a wild pitch on her eighth toss to Kloe Bolos that moved Ferman and Becker up a base, and Bolos ended up striking out on Beabout’s 11th pitch to her.

With two away, Kiersten Schell’s single plated Ferman for a 4-0 Wildcat advantage, but Becker was tagged out trying to score to end the half-inning.

Bischoff pitched a complete game from the circle for Franklin County and retired the first two Knightstown batters in the bottom of the first. Beabout then walked after falling behind 1-2 in the count and moved to second base on a wild pitch.

Beabout scored on Rena’ Witham’s single past the second baseman, pulling the hosts to within 4-1. Bischoff fanned the next batter on four pitches to end the inning.

The Wildcats added to their lead in the top of the second inning with a run, but could have had more. Camryn Brewer walked to lead off the frame, and Maci Lake and Kassidy Schell followed with consecutive singles to fill the bags with nobody out.

Rolfes stepped in and grounded the ball to third baseman Cara Mullen, who fielded it and threw it to catcher Alicia Knapp to force out Brewer at the plate for the first out, and the sacks stayed full.

Bischoff’s 6-5 grounder forced out Kassidy Schell at third base, but Lake scored to boost the Franklin County lead to 5-1. Beabout whiffed the next batter on three pitches to retire the side and the visitors left two runners aboard.

“We were proud of our defensive effort that inning,” Darling noted. “They had the bases loaded with no outs and scored only one run. We never let them (Wildcats) run away with the game.”

The Panthers went down 1-2-3 in the last of the second.

The Wildcats added a pair of unearned runs in the top of the third inning. Becker singled to left field leading off and a pop-up by Bolos was dropped for an error. Beabout retired the next two batters on pop-ups.

“We had a couple of misplays in the fields,” Darling said, “but we’re still a young team and growing.”

But with two away, Lake tripled to the left field fence, driving Becker and Bolos across the plate for a 7-1 Franklin County advantage. The next batter grounded out 6-3 to end the half inning.

Knightstown squeezed out a run in the bottom of the third. Leading off, Knapp walked on a 3-2 pitch. After the next batter whiffed, Knapp moved up two bases to third on consecutive wild pitches and scored on Mullen’s sacrifice bunt, trimming the visitors’ lead to 7-2.

Beabout singled to left field, moved to second base on a wild pitch, and stole third base. But Bischoff fanned the next batter on a called third strike to end the inning.

Becker singled leading off the top of the fourth inning and Bischoff’s sacrifice bunt moved Becker into scoring position. But the next batter lined out to shortstop Jalyn Kopp, and Kopp tagged Becker, who strayed too far off the second-base bag, for a double play to retire the side.

With two outs in the last of the fourth, Kensi Kain’s fly ball to the outfield was dropped for a two-base error. Mattie Manning followed with a single to centerfield, but Cain was tagged out at the plate trying to score to end the inning, and the Panthers didn’t score.

In the top of the fifth inning, Becker led off with a single to short left centerfield, but was forced out at second base on Bolos’ fielder’s choice grounder. Bolos moved the third base on a double to left field by Kiersten Schell. Brewer’s 1-3 groundout plated Bolos for an 8-2 Wildcat advantage, and Schell moved to third base. The next batter grounded out 4-3 to end the half-inning.

A two-out Knightstown rally plated two runs in the bottom of the fifth. With two away, Mullen singled to centerfield, moved to second on an infield hit by Beabout, and both runners recorded a double steal to get into scoring position.

Witham stepped in and hit a 1-1 Bischoff pitch into right field for a single, driving Mullen and Beabout across the plate, trimming the Wildcat lead to 8-4. The next batter popped out to end the inning.

Franklin County scored its final run in the top of the sixth inning. Kassidy Schell led off by lining Beabout’s first pitch off the third-base bag for a single to left field. Schell stole second base and moved to third on a wild pitch.

Beabout fanned the next batter for the first out, but Schell scored on Bischoff’s 6-3 groundout for a 9-4 Wildcat lead. Ferman singled off Kopp’s glove, but the next batter grounded out 5-3 to retire the side.

In the last of the sixth, the hosts got a one-out pop single to short centerfield by Cain, but Bischoff retired the other three batters and Knightstown didn’t score.

Beabout retired Franklin County in order in the top of the seventh inning.

The Panthers scored a run in their last at-bat. Leading off the bottom of the seventh, Kopp singled to left field and stole second base. Mullen walked on five pitches to put two runners on base with nobody out.

Beabout’s 4-6 grounder forced Mullen out at second base, but Kopp, hustling all the way, scored from second base on the fielder’s choice, cutting the Wildcat lead to 9-5.

Beabout got to second base on that fielder’s choice, but Bischoff struck out the next batter on four pitches and induced the batter after that to ground out 1-3, ending the game at 7:44 p.m. after 1:56 of playing time.

“We’re happy, but not satisfied, where we are right now,” Darling added. “We see improvement almost every time out and want that to continue.”